Two weeks ago, I attended the premiere for the documentary Sisters in Arms, about women in combat roles within the forces. I was asked to be part of a discussion panel after the premiere and given a chance to speak my opinion on where we stand as women and as a military. 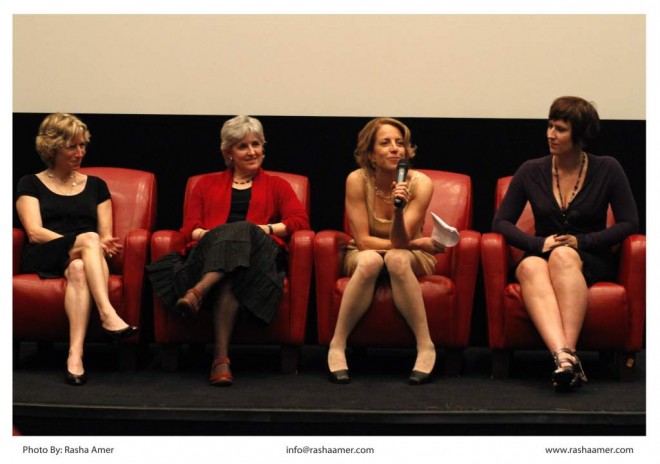 The Sisters in Arms documentary is about women in combat roles within the Canadian military and the experiences of 4 women when they deploy to Afghanistan. The project is dear to my heart, since I had witnessed a lot of the filming and had assisted Beth, the director and co-producer, in the frustrating world of paperwork. So when Beth asked me to attend the premiere in Vancouver, I was excited to go because I think the subject matter is important. Too often, we forget that in Canada, we’re very lucky, as women, to be able to be a part of any trade we want. Others in different countries are not as lucky. Not even the U.S., in all their military glory, allows women in combat roles.

The documentary was interesting and eye-opening, focusing on 4 separate women in combat roles. Afterwards, myself, Beth, Tamar (Beth`s sister and one of the women in the documentary) and Dr. Anne Irwin, participated in a discussion panel about women in combat roles and women in the military in general. I recall sitting there (I’m the one on the right) and thinking, who would have thought that I’ve become an expert? I allowed myself to talk myself down and discredit my knowledge. But the reality is that in living it, you become an expert.

Initially, I worried that no one would want to ask me a question. But I was asked several questions…all of them thought-provoking and well thought out. But the most touching question came from a woman who asked me, “Do you think the military does all that they can for military spouses? Do they work hard to keep them together and make things easier on you?” Hmm. Tricky one to answer.

I was honest with her. As a woman who is living on month 20 of 21 months away from her spouse, it’s hard to not be a smidge bitter. The military does so much but then again, it does so little. I know many spouses who are posted across the country from each other with option for change unless one of them chooses to get out of the forces and the other’s career is the one that gets to flourish. Ideally, Ben and I would have been on course or on operations concurrently vice consecutively. But these are the cards we’ve been dealt and we cope with them.

On the other hand, there are many programs in place to assist military couples that didn’t exist back when my parents were in the military. Military Family Resource Centres run courses on coping and dealing with deployments and we are offered free couple counselling and assistance. We have many resources at our fingertips that I am so thankful for and I often take advantage of.

During the reception afterwards, a woman came up to me and said, “I get what you were saying earlier, but you knew what you were getting into, so you can’t really be upset about it.” Ah, this statement from civilian people tends to make me rather angry so without sounding too bitter, it’s awfully easy to stand on the outside and say that we knew what we were getting into. I watched the recruitment videos and lived the life with my parents and for most people, that’s the extent of your military experience, along with some Hollywood movies to punctuate the knowledge. But ultimately, it’s impossible to ever really know what it will be like. You don’t expect the separation because it’s not something the military advertises, and it isn’t something that you think about when you’re 18, signing on that dotted line.

At the end of the day, is it ever normal to be away from your spouse for 1 year and 9 months? It is ever okay to ask people to give up their lives for others? Is it ever okay to ask a couple to work across the country from one another and still make it work? No. Not really. But then again, this is the nature of what we do. We do it because we know someone has to. We know that it matters. The sacrifices will all be worth it in the end.

The great thing about Sisters in Arms is that it reminds us that these soldiers, these women, are human beings with families and lovers and lives. They couldn’t have known how their lives would end up but then again, their passion and love for what they do is the reason most of us can live safely and comfortably in Canada.