Ms Chatelaine for the month of January, singer and social maverick Carrie Catherine, unites people both on and off the stage 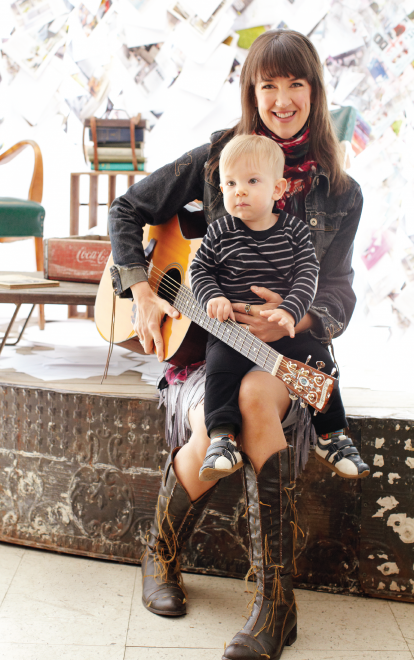 Carrie Catherine is bringing artists of all kinds under one roof in a contemporary creative enterprise. She and her husband, Curtis Olson, a developer, recently set up the Two Twenty, a communal office and event space with studios and a café, to give artists, freelancers and entrepreneurs a place to work together and inspire each other. “We wanted talented people to have a professional and creative shared environment,” she says of the property bordered by second-hand shops in Riversdale, a west Saskatoon neighbourhood in transition.

This is the second time the couple have tackled a community-building project: Their home is a converted 1930s grocery store that doubles as an intimate gig venue, the Hayloft (from where CBC’s Canada Live music show has been broadcast).

When Carrie’s not instigating social innovation, she’s a singer-songwriter. She won the 2009 Kerrville Folk Festival’s prestigious New Folk songwriting competition in Texas, as well as various other accolades. Her fourth CD, the rootsy Wilderness, was recorded two years ago in Nashville with Colin Linden, the Canadian producer and Grammy- and Juno-winning tone master. “Wilderness is about the thrill and discomfort of moving beyond the familiar terrain of your own backyard,” she says.

Just after she finished recording, Carrie found out she was pregnant. Almost four months pregnant, in fact. “I’d missed my whole first trimester!” she says. The couple had been trying to have children for years but had been so unlucky they gave up on the idea. (Her song “Rockabye” shares their pain of desperately wanting a baby but being unable to conceive.) Eliot was born in July 2010 and Carrie waited until the following May to release the album so she could take him on the road with her.

In June she began the aptly named “Baby on Board” tour of Western Canada, Ontario and Quebec. It involved serious multi-tasking, she says: “I’d be on stage telling Curtis, who’s also my sound technician, ‘I need more guitar in the monitor, some more verb on the vocals, and I think Eliot needs a change!’”

Carrie wants to take things a step further and get an Airstream trailer and portable stage so she and her music mom friends Coco Love Alcorn and Keri Latimer can tour together. “It’ll be called Babies on Board —we’ll be exhausted, but we’ll be having so much fun!”

I can’t live without…my red cruiser bicycle. Riding it makes me feel connected to my environment.

My guiltiest pleasure is…getting a babysitter so I can have’me time’. I feel bad leaving Eliot for self-indulgence, but it’s good for both of us in the end.

The last time I lost my temper was…at my husband for being late for supper. I had a million things to do and gave in to frustration.

The biggest mistake I ever made was…I’ve made lots of mistakes. To grow, we need to risk (and even celebrate) them. My latest? The last glass of wine at a girls’ night out!