Shout FHRITP at me and, yes, I will tell your mom

When it comes to handling sexist trolls, an old-fashioned scolding can be a pretty effective tactic. 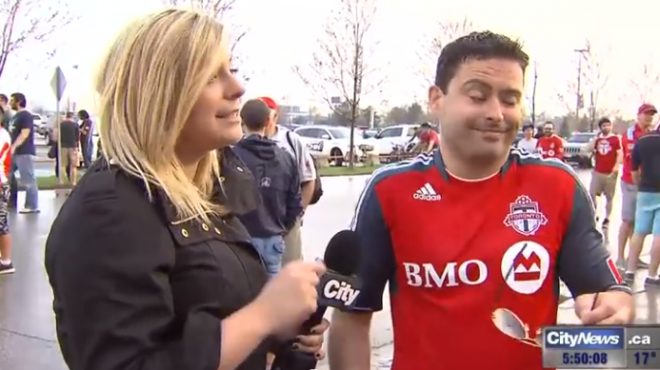 It was a trolling seen ’round the world: On Sunday evening, a group of grown men commandeered CityNews reporter Shauna Hunt’s live broadcast from the grounds of Toronto’s BMO stadium, yelling “F*** her right in the p****.” The guys stood around, laughing like schoolboys, even after Hunt took it upon herself to confront them. “And if your mom had [seen] you talk like this?” Hunt asked. “Oh, my mom would die laughing — eventually,” one of them replied.

Yesterday afternoon, that man lost his $100,000-a-year job at Hydro One. Was it a fair punishment? Hell, yes. He committed sexual harassment, broke his employer’s code of conduct and was stupid enough to do so in front of a TV camera.

In becoming the most recent target of international ridicule, this high-earning TFC fan found himself on the wrong end of a tried-and-true evolutionary method of behaviour correction, one that is most commonly used by parents of small children. Some observers, despite supporting Hunt, criticized her for playing the mom card. Toronto reporter Rosemary Westwood posed the question, “Why is it a woman’s job to police men?” But I say let’s play the mom card more often. As we witnessed on CityNews, it’s a pretty effective way to emasculate someone who uses masculinity as a weapon. Call it “the dad card,” if you’d prefer, but the bottom line is the responsibility to uphold a respectable level of conduct belongs to every adult member of society, regardless of gender.

Lately, there has been an encouraging shift towards publicly exposing sexist bullies and facing sometimes-faceless harassers head-on. One of the best recent examples of this was that of Australian journalist Alanah Pearce, who, upon realizing her Twitter trolls were mostly teenagers, relayed their vulgar and threatening messages directly to their mothers via social media. “It was just a way to try to reach a resolution, to productively teach young boys it’s not okay to be sexist to women, even if they’re on the Internet,” said Pearce. “That they are real people and that there should be actual consequences for that.”

At times, the same method that applies to training a child to chew with his mouth closed must be used in teaching men how not to behave towards women. In the wild, mothers eat their young. In polite society, we take away a toddler’s toys during a tantrum. Yell “F*** her in the p****” on live TV, and we’ll take that job back, please and thanks. It is a system of reward-and-punishment that dates back to the ’40s-era work of behavioural scientists like B. F. Skinner. Using lab rats as test subjects, Skinner introduced the concept of “operant conditioning,” arguing that behaviours that are rewarded tend to be repeated, while those that are punished die out. For better or worse, social ostracism remains one of our most powerful tools against misogyny.

Whether you call it “rape culture,” “herd misogyny” or something else, don’t kid yourself: The social permissiveness that allowed a fully grown man to brazenly yell vulgarities into a reporter’s microphone (FHRITP has an official website) is the same attitude that allows bored men to cat-call women from cars or internet trolls to issue death threats to female gamers. It’s the same principle that allowed a Nova Scotia teen named Rehtaeh Parsons to be sexually assaulted and filmed while her peers failed to intervene.

Parsons’s father, Glen Canning, is now an activist who uses M.A.D.D.’s ’80s-era drunk-driving campaign as a social-shaming success story in presentations to high-school students. “[M.A.D.D.] changed the entire conversation,” he told Chatelaine in December. “They made it so that if someone went into a bar and had two beers and was walking out to their car, people would be like ‘What the hell are you doing?’ …. We have to start doing that with people who shame victims. ‘How could you do something so mean?’ ‘How could you ever say something like that?’”

Like it or not, once we leave our homes, we enter into a social contract wherein we bear responsibility for each other’s behaviours. Of course, we have very little control over what people choose to do, but we have grossly underestimated our duty to condemn their actions. Men and women need to start shaming those who shame others — not stand in the background, cackling permissively like the FHRITP guy’s buddies did. Let’s not ignore crappy jokes or grabby dudes, no matter how innocuous the offense may seem. Because boys will be boys, unless we teach them how to be men.