Should Bert and Ernie get married?

Should Sesame Street’s Bert and Ernie declare they’re gay and get married? That’s what an online petition on the activist website Change.org would like to see happen. 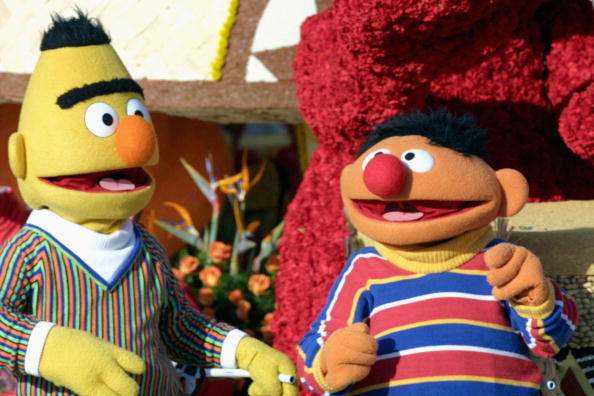 Should Sesame Street’s Bert and Ernie declare they’re gay and get married? That’s what an online petition on the activist website Change.org (the site features many different kinds of petitions for social change) would like to see happen. The petition’s argument is that a gay Bert and Ernie would encourage greater LGBT acceptance and that it would serve a community of young people struggling with feelings of shame and isolation.

The Bert and Ernie question is getting a lot of attention at the moment. So much so that the producers issued an official statement defending the muppets’ best friends/non-sexual (read: they’re made of felt) status. “Bert and Ernie are best friends. They were created to teach preschoolers that people can be good friends with those who are very different from themselves,” said a portion of the statement from producers.

It’s not the first time the sexual status of the twosome has come up. The persistent focus on the muppets’ off-camera relations (I’ve got a hunch it includes being shut up in a closet at night too, though not the kind some are thinking) makes me wonder what it is about the notion of friendship that escapes (or bores) adults. Have we come so far down the Jersey Shore that grownups can only conceive of friends with benefits now? If so, maybe we need to watch more Sesame Street.

For some reason, I don’t think kids find it hard to imagine that two muppets can enjoy each other’s company without crawling into each other’s sleeping bag at night.

But it’s not the question of whether Sesame Street chooses to create a gay character or “out” a long-running character on the series that I find kooky. It’s the idea that anyone feels they have the right to tell the series’ writers and producers how to make children’s TV. The petitioners aren’t just telling some flash in the pan how to make kids’ TV either, they’re telling Sesame Street, one of the most successful and innovative producers of children’s television ever, how to write children’s TV.

More importantly, why don’t the petitioners put their own ideas in action and create a show for kids that accurately represents their vision of responsible and educational kids entertainment rather than tell Sesame Street that a close friendship between a yellow goofball and an orange neatnik is a boring and invaluable lesson to kids?

When special interest groups of any stripe start pressuring writers of TV shows or books or films to reproduce their agendas, watch out. Matthew Weiner’s Mad Men may just become Mad People and its lethally flawed lead character Don Draper may find himself leading a recycling campaign rather than explore the ideas and themes initially conceived by his creator.