Shania Twain's new reality show, Why Not? With Shania Twain, documents the star's voyage of self-discovery after heartbreak. 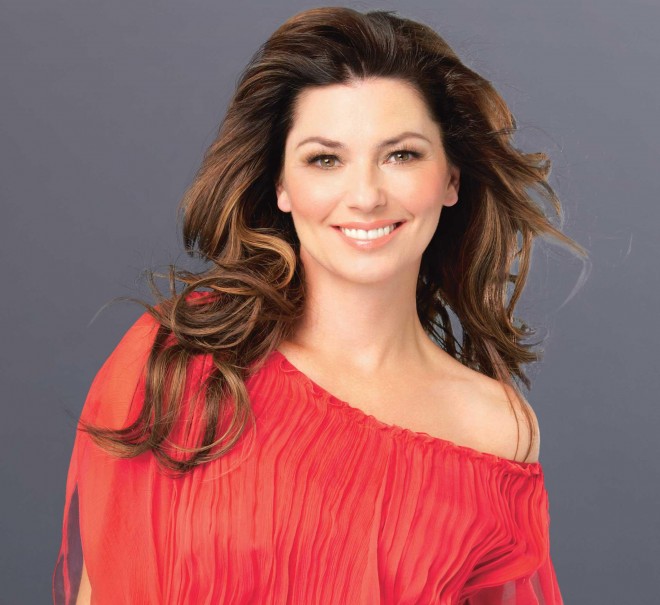 The pressure to return to a life topping the charts and charming the press — especially after taking a sabbatical from a demanding public — has been known to turn the best of talents into tyrants. In Shania Twain’s case (she’s earned five Grammys, 12 Junos and 26 Canadian Country Music Association Awards) the bar’s been set well above skyscraper territory. But at our photo shoot the morning after her big night as toast of the entire country at the Junos, Shania is surprisingly calm, arriving like a breath of fresh air. She glides in and out of her dressing room with a warm smile, her energy seeming as infectious as her choruses.

In on the action is Shania’s greatest fan, her husband of five months, 40-year-old Frédéric Thiébaud (who introduces himself as Fred). He’s the only person in the photo studio who addresses Shania by her birth name, Eilleen (Shania is actually a stage name that means “on my way” in Ojibwa — from her stepfather’s heritage ). After each outfit change, the petite Shania looks to Fred for a thumbs-up on what she’s wearing. The pair, who married on New Year’s Day , behave like newlyweds — kissing between frames and showing a healthy dose of frisky PDA throughout the day. Yet the way in which they met is more telenovela than typical.

Before Fred was in the picture, Shania was living a seemingly perfect life with her first husband, Mutt Lange, a highly successful music producer. The pair met in June of 1993 when Shania was just 27 years old. They connected so quickly that by December of that year, they were married and had finished writing a full-length album together. They seemed to have the whole work-life-balance deal worked out: They wrote together and sang together, and both took time off from their careers after relocating to Switzerland. Then, after over a decade of musical and personal high points — from Shania’s Lange-produced Come On Over (the biggest-selling country album of all-time) to the birth of the couple’s son, Eja, in 2001 — their marriage ended abruptly. Shania discovered Mutt was having an affair with Fred’s wife, Marie-Anne. To add insult to injury, Marie-Anne was one of Shania’s closest friends and Mutt’s secretary. Turning to each other during the aftermath of it all and the onslaught of media attention, Fred and Shania fell in love. Which is probably why when Shania sits down to chat after the photo shoot, the protective Fred makes sure he is within earshot.

Letting people in on the intimate details of your private life isn’t easy — especially for someone like Shania, who has a history of holding her cards close to her midriff. Quickly acknowledging that what she went through with Mutt “changed my life and changed my way of thinking,” Shania rewrote her life to-do list. “I wanted to be more extroverted and I thought that being on a TV show would help.” Shania’s new show, Why Not? With Shania Twain, documents the star’s voyage of self-discovery. Explaining the show’s premise, Shania suddenly gives her shoulders a shrug and offers a revelation: “Being on the stage has always ranked high as one of my greatest fears. I love the people and I love expressing the music, but I don’t love being in the spotlight.”

But you’d never know it, says country-music ingenue Taylor Swift. “Shania comes off as someone who is so confident and on top of her game on stage,” says Taylor. “She can hold the crowd’s attention like no other artist. I can only aspire to be like her.” According to Shania, putting on a brave front was always part of the job. “I had to hide it but this is my torture in being a performing artist!” Shania says, absent-mindedly squeezing the three-carat-diamond engagement ring on her left hand. “Documenting my challenges on the show helped me face some of my fears, and stopped me from being so closed all the time.”

Shania refers to her journey as a re-emergence and “redirection.” Now the 45-year-old mom is doing something that would have been unheard of while she was racking up number-one hits: taking her sweet time. And as she works on her next album , taking her time is exactly what she intends to do with one of the project’s biggest decisions — choosing a studio replacement for Mutt, who is often credited with plucking her from country-music obscurity and turning her into an international sensation. “I’ve enjoyed going back to writing alone,” she says before issuing a piece of hard-earned advice. “Listen, even if your marriage lasts forever, there are moments when you need to make time for yourself, for something that is just yours and yours alone.”

Click here to read an excerpt from Shania’s memoir, From This Moment On, and here to watch her behind-the-scenes cover shoot!