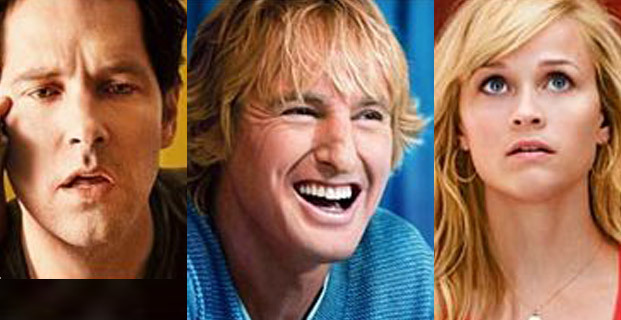 In theatres
Reese Witherspoon juggles two men in the fluffy rom-com How Do You Know, which opens this weekend. In the flick, Witherspoon has to decide whether to settle for her current beau, a chilled-out athlete played by Owen Wilson, or to take a chance on her attraction to goofy nice-guy suit played by Paul Rudd. Wilson or Rudd, who’d you rather take home for Christmas? (And no, you can’t say “Jake Gyllenhaal.”) See the trailer before you make your decision.

On shelves
Just in time to plan your Christmas dinner menu, comes Great Food, All Day Long from renowned poet and diehard foodie, Maya Angelou. Great Food offers Angelou’s favourite recipes: cornbread! pork fried-rice! More importantly, the recently svelte author offers tips on how to eat well without having to resort to wearing the dreaded elastic waistband for the better part of 2011.

Watch
‘Tis the season for celeb-inspired Christmas carols. Funny or Die’s Will Ferrell and John C. Reilly put on their best 70s attire for a spot-on recreation of Bing Crosby and David Bowie’s classic 1977 version of Peace on Earth/Little Drummer Boy. See Ferrell and Reilly’s version here. For old time’s sake, check out the Bowie/Crosby original too.

Listen
Ryan Adams & The Cardinals new double album, III/IV has been called a 80s-inspired rock opera. Featuring 21 previously unreleased songs written during the making of 2007’s Easy Tiger, the album is in stores this week. Also on shelves: singer Ciara’s new album, Basic Instinct. The hits-heavy CD from Beyonce’s producers is designed to pump you up for the office Christmas party.

On TV
Survivor Nicaragua wraps up on Sunday night with the big finale and reunion special. Who will go home with the million dollars? Who will go home empty-handed? And who is going to make the biggest trouble during the reunion? (Our money is on Naonka.) One thing is certain: for one lucky survivor, it’s going to be a pretty great Christmas.