Five real-life strategies to help you conquer your deepest phobias 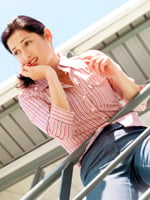 By most accounts, Lucy Johnson isn’t a scaredy-cat. She’s not afraid of the dark, she doesn’t cover her eyes during slasher flicks, and she takes thunderstorms in stride. But show her a butterfly and she loses it. “I can’t remember a time when I wasn’t terrified of them,” says Johnson, a 27-year-old from Toronto. “I get panicky, my heart races, and I have to cover my face and get away. Sometimes I even cry.”

Is she crazy? Nope. “A certain group of people are simply afraid of things for reasons we can’t pinpoint,” says Dr. Mark Watling, a psychiatrist at the Anxiety Treatment and Research Centre in Hamilton, Ont. An estimated 11 per cent of Canadians suffer from a phobia. While the most common triggers are animals (such as snakes and spiders), heights, enclosed spaces, flying, blood and needles, people can develop phobias of just about anything.

The difference between fear and a phobia is the intensity. “Phobias are exaggerated fears that interfere with day-to-day functioning and may even have an impact on relationships,” says Dr. Watling. Theories abound about how and why phobias develop. Some say they’re learned directly (someone who has been in multiple car accidents, for instance, may develop a driving phobia), while others say they’re learned by observation (if your mom is afraid of snakes, you may learn to be afraid, too). Sometimes, as in Johnson’s case, the root of the phobia just can’t be explained. The good news is, there are ways to overcome phobias. Read on for some tips to soothe your fears.

Enlist a cheerleader Tell a trusted friend or family member about your phobia and your plans to overcome it. “Having someone who will encourage you to do things that are difficult can be a big help in dealing with a phobia,” Dr. Watling says. Remember to choose wisely: you want someone who will encourage and support you, not force you into anything you’re uncomfortable with.

Face your fear Exposing yourself to your phobia in a gradual, controlled manner is one of the most effective ways of getting over it, says Dr. Watling. Start by breaking down your fear into a rank-ordered list of situations, beginning with the least threatening. For example, if you’re afraid of spiders, the first step may be looking at cartoon pictures of the creepy-crawlers. Next, look at photos of the real thing, and so on.

The key is to remain in each situation long enough for your anxiety to pass before moving on to the next step. “If you leave a particular scenario while you’re still feeling anxious, it reinforces your impulse to avoid it,” says Dr. Watling. “You want the experience to go away while you’re still in the situation, whether it takes five minutes or a number of days.”

It sounds difficult, but exposure works for two reasons. First, it signals to your brain that the situation is safe and you’re in no real danger. Second, it builds habituation. “You learn to get used to the situation without panicking,” Dr. Watling says. It’s important to remember that everyone has different end points in exposure therapy – you don’t necessarily have to hold a spider, for instance, to overcome your phobia of spiders. “It’s up to each individual to draw the line at what she’s comfortable with,” Dr. Watling says.

Challenge your thinking Ask yourself what’s the worst that could happen. “When people have phobias, quite often they’re based on irrational predictions, meaning their ways of thinking do not reflect reality,” says Dr. Watling. “What we want people to do is learn to shift their thoughts into more realistic interpretations.”

One of the best ways to think realistically is to learn more about your phobia. If you have a fear of flying, gather some statistics about plane crashes or learn more about the various sounds of the engine (no, that rumble wasn’t the sound of a wing falling off). The more informed you are, the better your chances of thinking rationally.

Avoid avoidance If you turn off the 6 o’clock news for fear of seeing blood or refuse to open a magazine in case there’s a picture of a snake inside, chances are you’re avoiding unplanned exposure. Train yourself to stick through situations that may expose you to your phobia, even when they’re unexpected. “Like with planned exposure, the idea here is to create a new, positive learning experience,” says Dr. Watling. “When nothing terrible happens, it signals to the person that she’s not in danger.”

See a therapist Some phobias – such as agoraphobia, a fear of open or public spaces – are difficult to overcome on your own. Talk to your doctor about finding professional help.