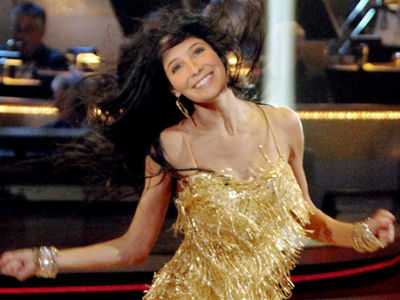 Everyone’s favourite Alaskan mom made an appearance on everyone’s favourite celebrity dance show yesterday, as Sarah Palin dropped by Dancing with the Stars to support her daughter, contestant Bristol. Asked by co-host Tom Bergeron to pick a favourite, Palin responded “Oh my goodness, they’re all amazing,” before putting her money on Bristol. Audible booing could be heard from the audience as Palin came onscreen, but the show’s hosts finessed their way around it.

Though more of you are breaking through the glass ceiling than ever before, new research shows there is still a price to pay for being a working woman. According to a study released today by the American Government Accountability Office, women in managerial positions make 81 cents for every dollar a man makes, are less likely to be married, and are less likely to have children than their male counterparts. Fair? We think not.

Got a question about religion? Ask an atheist! A recent American survey of general religious knowledge found that those who know the most about religion are in fact, not religious. Atheists and agnostics scored highest on the 32-question quiz, followed closely by Jews and Mormons. Catholics and Protestants scored considerably lower than everyone else.

An Iranian woman accused of adultery could still, in theory, be stoned to death for her alleged crime. Iranian president Mahmoud Ahmedinejad last week said the stoning charges against Sakineh Mohammadi Ashtiani were “made up,” but yesterday Iran’s chief prosecutor refuted the president, saying that an Iranian woman could still be stoned for the charge of adultery. Those sentenced to stoning in Iran are buried up to their neck and then pelted to death with rocks.

It’s a topic that divides Canadians – and apparently very evenly. A new Ipsos Reid poll released by the CBC shows that Canadians are almost perfectly divided on the issue of oilsands development in Alberta. Of those surveyed, 51 percent agreed that “while there are some risks to the environment with this development, the need for energy in Canada outweighs those risks.” The other 49 percent felt that “while there is a need for energy in Canada, it does not outweigh the environmental risks with this development.”