The doctors were holding off on delivering what they thought was terrible news about our baby. But we already knew - and it wasn't terrible at all. 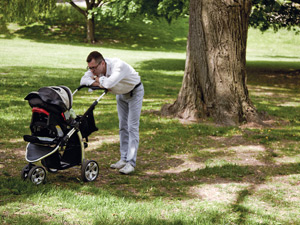 Our third ultrasound, we had a phlegmatic technician with an eastern European accent. You just knew he was dying for a smoke. He wouldn’t answer questions. After 10 inscrutable minutes, he said, “You want to know sex?” Yes, we said. I held her hand.

“I see testicles,” he said. I was peering at the screen myself: it showed a throbbing mass of grey blobs, an unsexy lava lamp. “Where do you see them?” I said.

With a look of great disgust, he said to me, “Between the legs.”

To this day I don’t know if he was seriously being a prick or being funny. This is the thing about eastern European humour. I know this because my girl is Polish.

Whatever. I was fairly happy about it being a boy, because my father had just died, suddenly and unexpectedly, a few months before, and I had a sentimental feeling about replacing him or maybe pleasing him with a son.

But the technician wasn’t so happy: he got quieter and quieter as he went on, and I could tell he was paying particular attention to the hands, as we knew he would, and getting irritable with his equipment and sighing and snapping his fingers as the blobs spun on his screen. He couldn’t get a clear look. We went through another half-hour of silence as he tried to scan the feet. Then he got up and said, “Wait here,” and we knew he was looking for a doctor.

We saw lots of doctors that day, and there was a great sense of gloom as they pushed us from one waiting room to the other, holding off on what they thought was terrible news. It was silly, as I already knew the news, and it wasn’t terrible; I knew the second I saw the grainy bunched little fists, a mass of webbed flesh, and in fact I had known somehow all along that our baby would be a boy and that he would have inherited the deformity of the hands and feet that I have and that my father had and his father had.

It’s called syndactyly, Greek for “digits together”; we have the complete complex form, in which the bones themselves are fused, the length of two fingers on each hand. And a couple of other fingers are twisted and knobby in improbable ways too. Same with the toes. I can’t open my left hand fully, or move the central fused fingers at all. So I can’t hold a basketball or catch a baseball, and my career as a concert pianist was limited from an early age, but the thumb and index are opposed, so I can hold a pen and a wineglass, which is all the dexterity my career as a writer has demanded of me so far. There’s a 50-percent chance of my passing it on to offspring of either sex.

We knew the risks, so we didn’t need all the sombre counselling that lasted the next six hours; we wanted to go home. I felt like snapping at them: “Look at me. Can’t you see I’m okay?”

I cried a bit; I felt guilty. I knew he was in for surgery over the next few years, to separate his fused bones and flesh and enable him to type and hold a suitcase. I spent the first years of my life in frequent surgery, and although I have only one clear memory of it – probably my earliest memory of all, actually: a doctor in a green-walled room picking black stitches out of my feet – I still get weepy and mildly hysterical on entering children’s hospitals, and even in doctors’ waiting rooms where there are bright plastic toys strewn about. I know that I was traumatized by the surgery, possibly more than by the disability, and that my parents suffered my pain in a helpless guilty way, too.

I was crying then, though, as much for the sudden absence of my father, for I knew that in that moment he would have been nothing but happy, purely optimistic and reassuring. He would never have thought of our condition as a disability: in fact he forbade me to. We never mentioned that word. He grew up in white South Africa, in a militaristic culture, and in that straitened macho enclave it was accepted that everyone had some kind of disadvantage and everyone was expected to do their best. There were no exceptions made for him: he had to throw balls and climb ropes and fire weapons with everyone else.

He had a difficult time with some of these things – he had to practise particularly hard to hold a cricket bat, and my grandmother said as a small child he used to go into a closet to cry after every practice, an activity as necessary and embarrassing as using the bathroom – but he did extraordinarily well at others, and later became captain of the Lincoln College rugby team at Oxford. It’s a visible de­formity, but it didn’t seem to hurt his chances with the ladies either. (My mother is a noted beauty; my pictures of her modelling at 19 or 20 give my friends mixed and alarming emotions.)

And so I, as a child, was also made to endure practice with musical instruments (in Halifax in the 1970s it was the ukulele; when I tell people they never believe it). It was a task I simply couldn’t do, and yet I went through every lesson coming up with an approximation of each chord with whatever stubby fingers I could move. There was never any question of me sitting it out.

I try to remember if I was bullied because of it, and I can only come up with a couple of mild memories: I’m sure the kids with darker skin or funny voices had a harder time than I. My girl says she was teased far more in high school for her Polish accent, and I believe her.

And because I never knew anything else, I really didn’t think about it much. I still don’t.

But I thought hard about passing it, and its attendant childhood surgeries, to my son. I had never wanted children for this reason. But when the pregnancy happened – accidentally – there was no way I was going to even try to convince my lover of six years that there was any reason to avoid or fear delivering a child that resembled me. It was going to happen and I was either in or out. I was relieved when it happened, for it was what I wanted, and yet I hadn’t had to make the decision.

Hugo is now a strapping, rosy, energetic, quite unbearably beautiful baby, and he is perfectly healthy. As I write this, surgeons are deciding whether they will be able to operate to improve his dexterity. He apparently has less fully formed bone to work with than I did. Meanwhile he is grasping small objects with ease and holding his own bottle to his mouth with gluttony and abandon. He looks like my dad.

Of course I worry for him. Of course I still wonder if we should have hesitated before passing on my condition. I know my dad wouldn’t have either worried or hesitated. My son will have his mother’s beauty and he will get eastern European jokes. And if he’s like my dad, and if I can be as good a father as he was, he will have more advantages than disadvantages.

And everybody – everybody in the whole world, even clever WASP boys and tall beautiful Polish girls – has some disadvantage.

Russell Smith is an award-winning writer and journalist. His latest novel, Girl Crazy, came out in April.