Rinelle Harper told a crowd 16,000 strong in Winnipeg how she moved forward after she was viciously attacked last year. 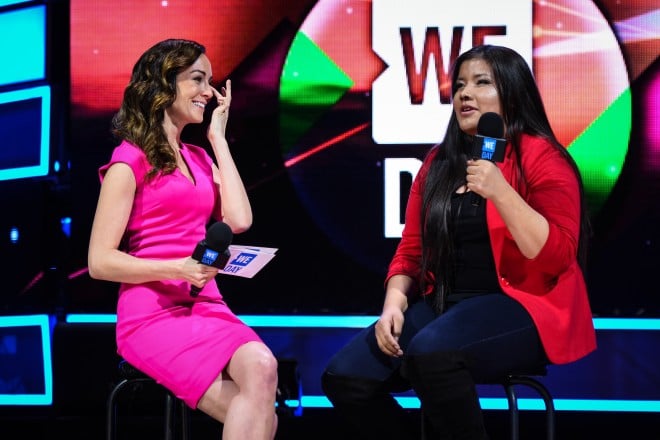 Rinelle Harper is the very face of resilience. After being viciously attacked and sexually assaulted, she crawled out of Winnipeg’s Assiniboine River only to be beaten again on a cold night last November. But she rose to fight back. Despite her physical and emotional wounds, she returned to school and graduated Grade 11 with her peers. When her home on the Garden Hill First Nation reserve in Manitoba burned to the ground this summer, she and her family stayed strong.

Through it all, the 17-year-old had been called on to share her story — a major task for a shy teenage girl seeking normalcy on the hard road to recovery. But Harper wanted to share her resilience with Canada, and did so wonderfully well at WE Day in Winnipeg this week. The crowd of 16,000 youth assembled at the MTS Centre was silent as Harper spoke about what got her through it all.

“When I was in the hospital, my mom wanted me to take the semester off to recover, but all I could think about was moving forward. I didn’t want to let my experience to hold me back,” she said. “Yes, I was hurt, but my spirit was still very strong. I learned from a young age that education is a doorway to a better life.”

Although she was still “hurting a lot,” Harper made the choice to return to school just two weeks after the attack.

Interviewing Harper on the WE Day stage was Amanda Lindhout, herself a survivor of sexual violence, but at the hands of captors in war-torn Somalia. The two formed a friendship after Harper’s mother reached out via Facebook to say her daughter was familiar with Lindhout’s story. They bonded over the experience of reading blaring headlines about their personal pain, about the language that was used. Lindhout became a mentor to Harper and they worked closely together to prepare for WE Day.

“I want to teach people that change starts with us, through education, by understanding more about the world. We have to ask ourselves how we contribute to violence and take responsibility to change our words and our thoughts.” she said.

“It’s not easy to speak up sometimes. It feels like a risk. It can be scary. But I’ve learned that if you use your voice, others will join you.”

Her answers to Lindhout’s questions elicited multiple cheers of support from an audience hanging on every word. She would glance at Lindhout during these moments looking very much like a shy teenager nervous about being in the hot seat, but determined to get her message out.

“I didn’t choose what happened to me but I did make a choice to speak out against violence,” Harper said. “That’s how I think of myself — not as a victim, but as a voice for change.”

‘I was 19 the night I was kidnapped and raped’
Michèle Audette: “We don’t want our sons to become the perpetrators”
Ashley Callingbull is all kinds of amazing