Resistance 150: Indigenous artists challenge Canadians to reckon with our history

'It’s time that people really listened to what Indigenous people have been saying for years.'

For many Canadians, July 1 will be the high point in a year of celebrations for our nation’s 150th birthday. But for many Indigenous people, the framing of “Canada 150” represents the country’s long history of colonialism and inequality, injustices that persist today. Their experiences chafe against the self-congratulatory narrative of the anniversary of Confederation. For them, even the name — Canada 150 — erases the histories of Indigenous people who have lived here for more than 15,000 years.

Some Indigenous people are pushing back, calling for our country to confront and acknowledge the past. The #Resistance150 project, led by Métis artist Christi Belcourt, has emerged as a prominent voice of protest. Many other artists have joined the movement, sharing work that celebrates the resilience of Indigenous communities and challenges Canadians to reflect on our country’s complicated legacy from a new perspective.

Meet five of them. 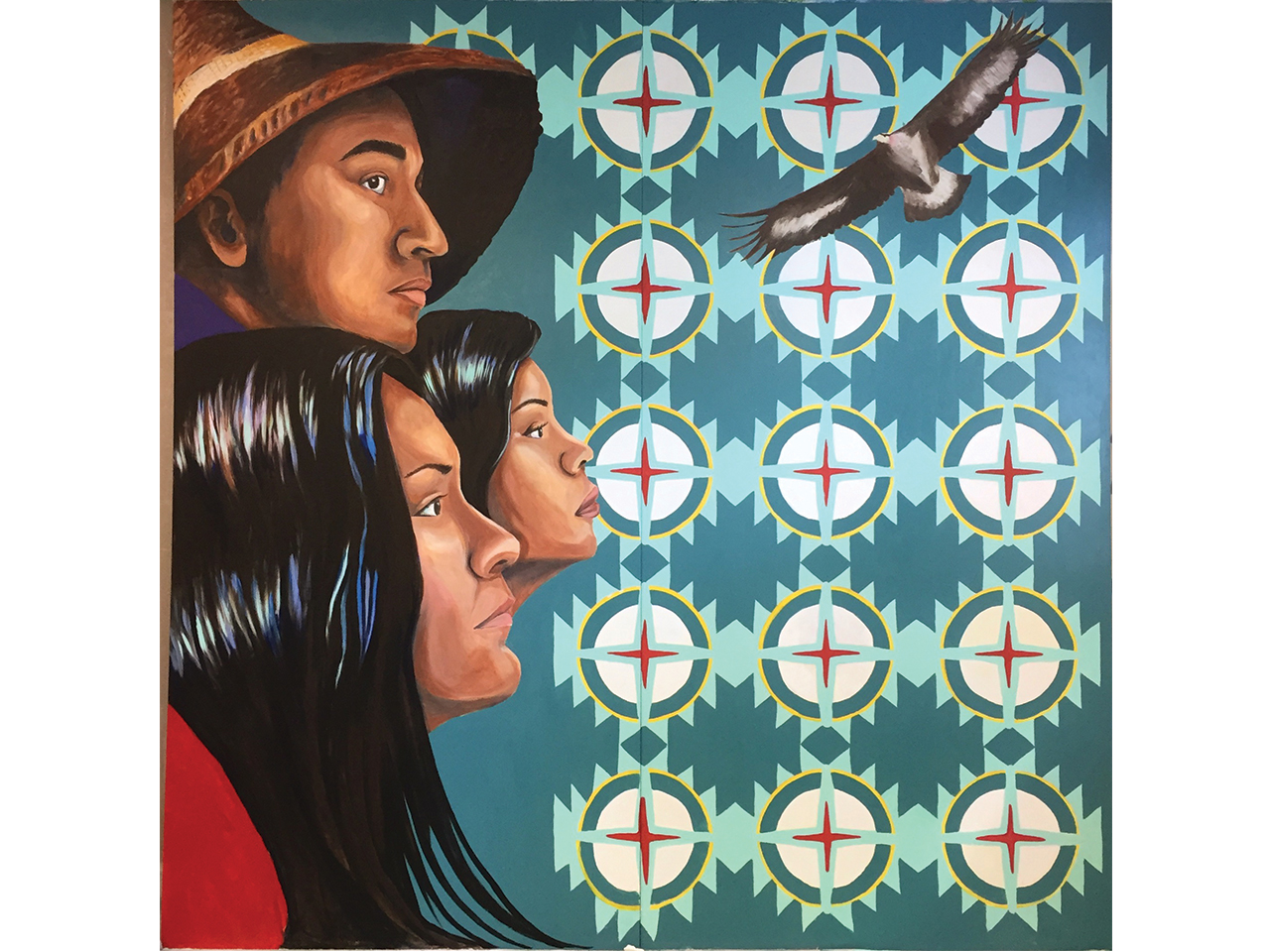 Mural of local Indigenous youth, created for the Bridgeview Community Centre for National Aboriginal Day, with the support of the Aboriginal Leadership Committee in Surrey.

Jeska Slater
Slater, a Nehiyaw iskwew (Cree woman) whose mother’s family is from Ochekwi Sipi (Fisher River Cree Nation) in Manitoba, has been painting for as long as she can remember. “Painting was a huge part of my healing and wellness as a teen,” she says. “I grew up with a lot of issues around identity, and faced barriers, but I found a lot of relief in the creative process. And it helped me connect with my culture.” She made it her mission to provide youth with the same outlet, founding Young Artist Warriors, an organization for Indigenous youth, in 2008. “All our work has a social justice aspect,” says Slater. “It’s not just making artwork, it’s coupled with learning about the effects of colonization and learning about our cultures as well.”

For Slater, public art created by and featuring Indigenous youth is a way of reclaiming their identity. “I call it visual sovereignty,” she says. “Where do we see our young people presented in a powerful light? They are so strong, so grounded in their culture, doing amazing work. That’s what we want to highlight and represent to other youth, who don’t see many Indigenous people in art, in the media.” This is evident in her new mural, celebrating the large Indigenous community of Surrey, BC. The three youth represent future generations, and each star represents 1,000 Indigenous people living in Surrey; the eagle stands for Indigenous teachings and protocols that guide their work.

For Slater, Canada 150 is complicated. “It really marks the start of oppression for our people. I’m happy in a way that Canada has considered the unique experience of Indigenous people and provided resources [for us to participate].

[But] I have really mixed feelings about it. This is the time to delve into what these last 150 years have meant for our families. [Canadians] can say ‘we want dialogue, we want reconciliation,’ but it’s the actions that speak louder than words.” 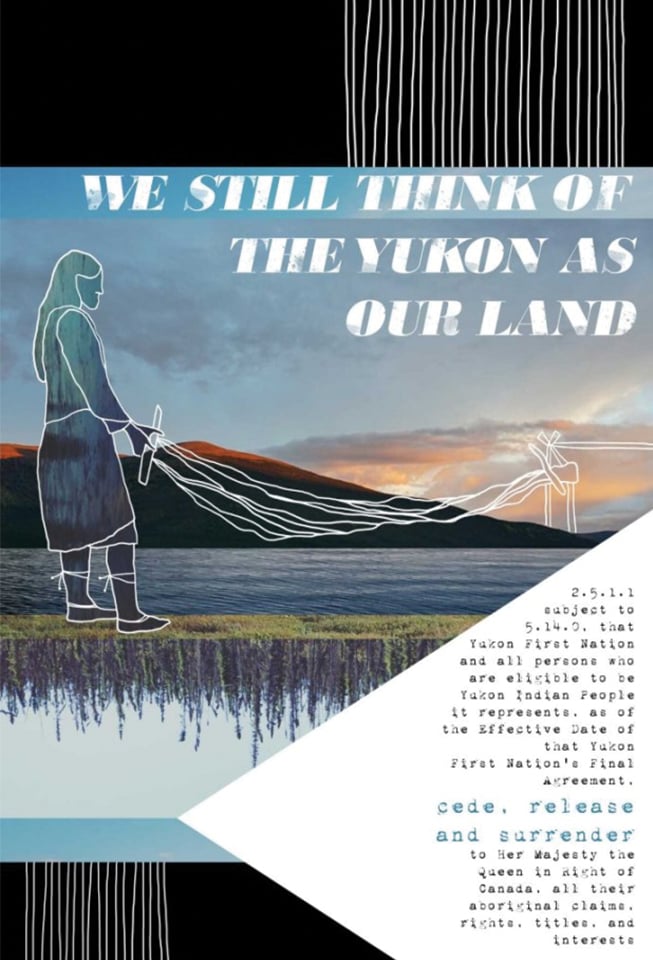 Lianne Charlie
Charlie is a Ph.D. candidate at Yukon College in Whitehorse and a digital media artist whose collage work layers photography, digital drawing, and text. A member of the Tagé Cho Hudän (Big River People), she grew up away from the Yukon and returned as an adult to connect with her family and culture. Last year, she was invited by the Graphic History Collective to participate in a poster project called Remember/ Resist/ Redraw that offers alternative perspectives on Canadian history.

Yukon First Nations are self-governing, with modern treaties under the Umbrella Final Agreement, but Charlie was fascinated by a seldom-discussed clause in the treaty called Cede, Release, Surrender. “[In order] to get access to jurisdictional powers and protect certain land bases, we had to surrender a lot,” says Charlie. “Our settlement land is only eight percent of our traditional territory, but what about the rest?”

Her poster depicts a woman engaged in the traditional activity of tanning moose hide, and juxtaposes the text of the Cede, Release, Surrender clause with the statement, We still think of the Yukon as our land. “In my mind, these two quotes are sitting in tension with each other, and creating a big question for us as we move forward with our politics and actions.

“What’s cool is that the poster can stand alone, but when you use it as a teaching tool or a conversation starter, it can go into so much depth,” she explains. “The kind of attention that Canada 150 is getting is certainly an invitation to have these critical conversations. But the work extends beyond those 150 years, and beyond that narrative.” 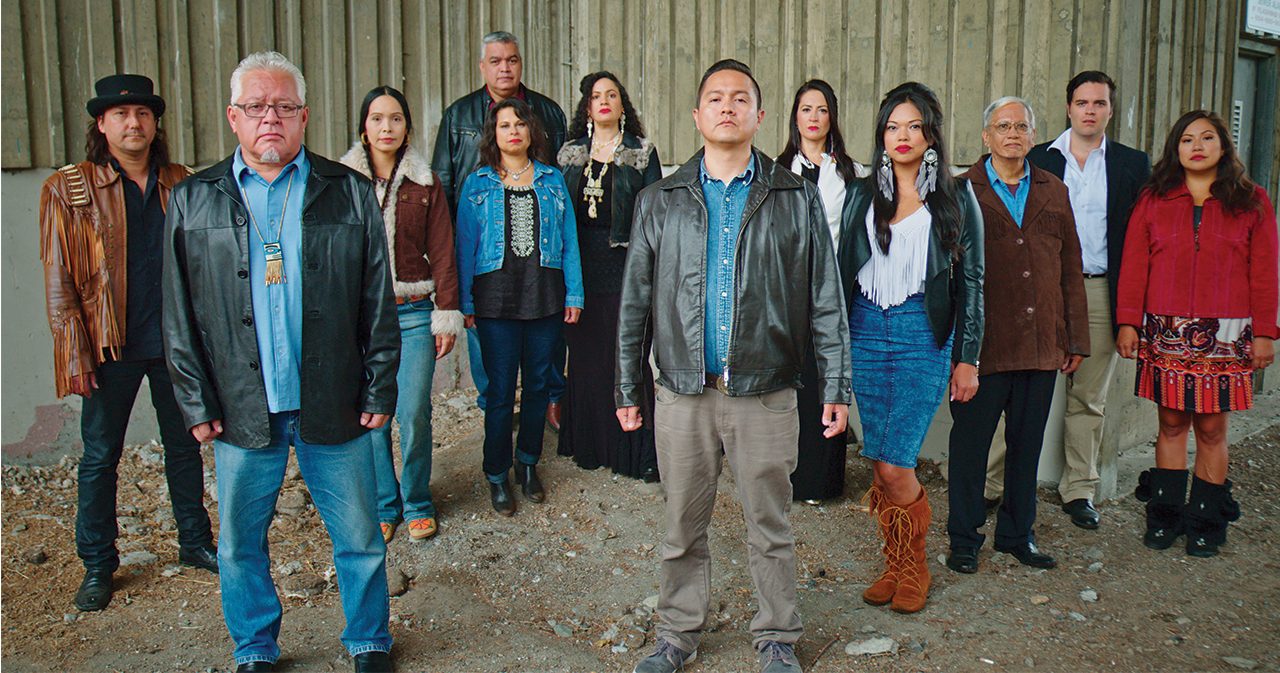 Marie Clements
Metis artist Marie Clements has many titles — director, screenwriter, producer, journalist, playwright. “I mostly just say filmmaker,” she says. Most recently, she wrote and directed The Road Forward, a musical documentary inspired by her research on The Native Voice, a newspaper founded by Indigenous activist organizations in B.C. in the 1940s.

The Road Forward features interviews with elders and activists, interspersed with musical sequences performed by more than a dozen Indigenous singers and drummers, pictured here, many of whom are long collaborators of Clements’s. “I believe that we’re at a critical mass of Aboriginal musical talent in this country. I love that they’re bringing their voices to the causes they think are important and trying to create change.”

Clements says that she didn’t realize her film would premiere the same year as Canada 150, but connects the current resistance to a long history of Indigenous movements for change and justice. “We come from a long tradition of working to make things right,” she says. “We’re conscious of that need to strive for something better and grab hold of it. And Canada 150, it’s a good issue for having that dialogue.” 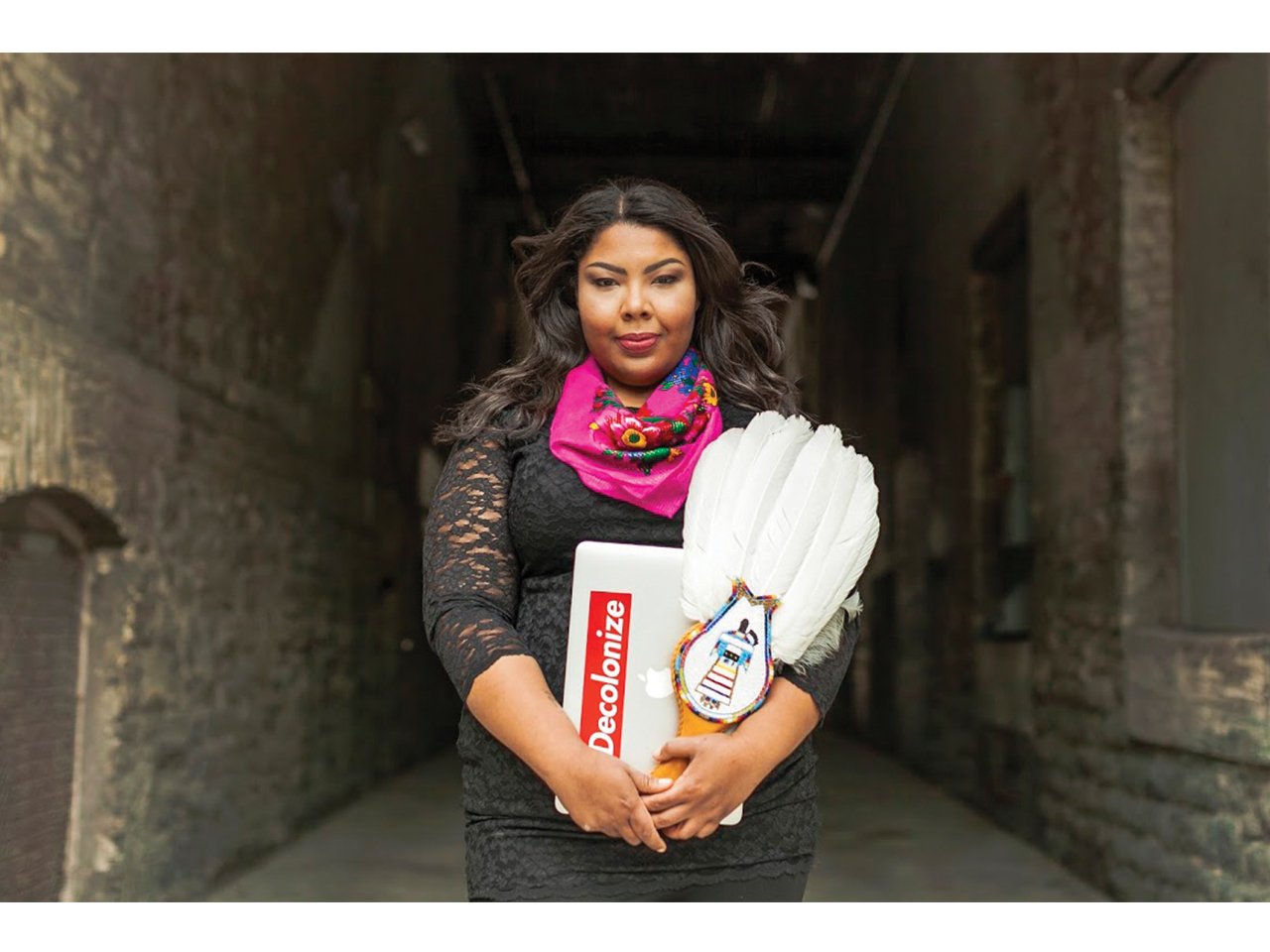 Nadya Kwandibens
When the #Canada150 hashtag began circulating on social media in January, photographer Nadya Kwandibens tweeted, “Don’t tag my art #Canada150 and/or #reconciliation. My art does not celebrate colonialism nor does it bow to the industry of reconciliation.” The tweet was shared hundreds of times, becoming part of a larger critical discussion about the anniversary.“It’s not OK for people to step in and label my work as portraits of ‘Canada’s happy, vibrant, reconciled Indigenous people,’” she says. “Our young people are dying in rivers, our young people are committing suicide. We have people in my generation who don’t know our language. The struggles are constant.”

The Anishinaabe/ Ojibwe photographer calls northwestern Ontario home, but spends nine months of the year on the road, photographing portraits of Indigenous people, and documenting Indigenous communities, events, and concerts under the studio name Red Works. Since her first portrait session in 2006, she’s built a thriving business, but in the past year she’s made the decision to turn down any work associated with Canada 150, explaining, “It’s important to maintain integrity.”

Integrity, for Kwandibens, means documenting real Indigenous people in a multifaceted light. “We’re always depicted with so much negativity, and my work shows broader society another side. It flips that narrative.” In Concrete Indians, she showcases that diversity through portraits of Indigenous city dwellers expressing their identity and culture in contrast to their contemporary urban settings.

“There’s still so much that needs to be done. And it’s not my job to do the work for you, speaking as an Indigenous person. You have to take it up yourselves, be genuinely interested, genuinely concerned,” says Kwandibens of reconciliation. “It’s time that people really listened to what Indigenous people have been saying for years.” 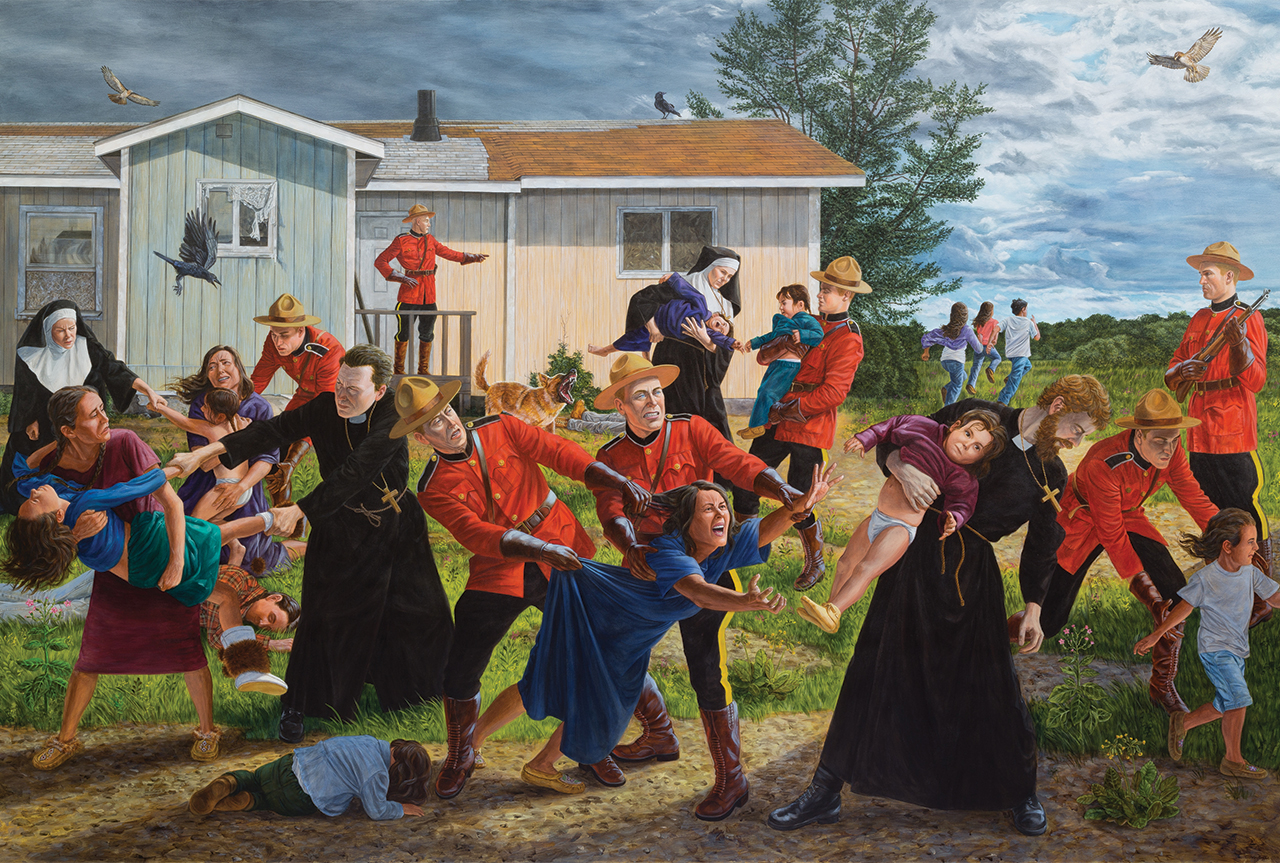 Kent Monkman
“Resistance has been part of my practice for my whole career,” says Monkman, a Cree artist whose body of work spans more than 20 years and includes painting, film, installation, and performance. His latest exhibition, Shame & Prejudice, confronts the issue directly. “What do the last 150 years mean to Indigenous people?” says Monkman. “I decided to create a narrative to take a critical perspective on the last 150 years, because it hasn’t been great for Indigenous people, to put it bluntly.”

Monkman borrowed artifacts from museums across Canada, curating them as the starting points for paintings that are divided into nine chapters of Canadian-Indigenous history, spanning topics from Confederation to residential schools to missing and murdered Indigenous women in vibrant, unsparing detail. The Scream depicts Indigenous children being torn from their families by priests and Mounties. Shame and Prejudice will tour Canadian museums until 2020, exposing Canadians from coast to coast to the dark chapters of our history and, Monkman hopes, provoking conversation and action.

“The TRC report is out now. There’s no excuse for every Canadian not to read it. That’s where I’m trying to bring awareness to people who have no idea. For generations, our country hasn’t been truthful to its own constituents. This exhibition is just one tiny sliver of that story.”

More:
Vitamin K: How to reap the benefits of this essential nutrient
‘Mummy, am I white?’ What I’ve learned from raising a biracial child
Subscribe to our newsletters