In one of the world’s most patriarchal societies, some women swore to celibacy and lived as men to gain civil rights 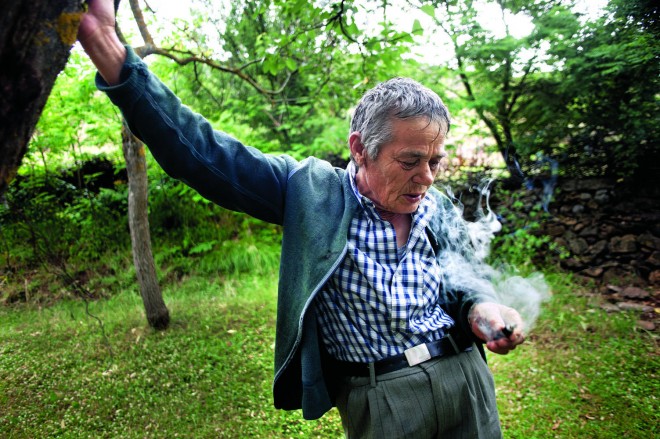 Stooped, with cropped hair and wearing a checked shirt and trousers with pleats, Hakije Shehi sits in a yard among weeds tall enough to tickle his knees, chain-smoking. He looks like any other old man in this tiny eastern European village, but on second glance, there is something slightly off.

Hakije was born a girl in Tpla, a lonely hamlet on the high plateaus of Albania. She’s always lived as a man,
which no one here finds surprising. In this isolated region, the locals are used to this age-old custom, where women have taken on the social identity of the opposite sex in exchange for what were once male privileges: owning land, living on their own, having a job and drinking in the tavern. But Hakije and others like her are the tail end of a 600-year-old patriarchal tradition that is dying out in the face of modernity. There are fewer than 20 sworn virgins, as they are also known, left in the country.

Qamile Stema, aged 92, is perhaps the oldest of the group. Her father died when she was young, and without a man in the house, her mother had no way of supporting her nine daughters. “She wanted to marry me off,” says Qamile. “Instead I decided to become the head of the household.” She took off her skirt and put on the tirce, the traditional trousers, and the qeleshe, a little beige felt hat she’s been wearing ever since. In 1940, at the age of 20, Qamile became a burrneshë (the Albanian word for man but with a feminine ending).

“Becoming a sworn virgin was not a free choice,” explains Albanian ethnologist Mark Tirta. “Only two reasons were accepted: the lack of a male head of the household or withdrawal from an arranged marriage.” In the second case, a girl who broke off an engagement would incite a vendetta —carried out by the rejected man—unless she swore to remain a virgin. The former happened when the father died without leaving a male heir. Who was there to inherit the land? Certainly not a girl. Since an unmarried woman had virtually no social identity, the burrneshë simply assumed the role, haircut and clothes of a man. From then on she could do all sorts of things: drink, smoke, wear a watch, go out alone and even kill. In Albania men are expected to seek vengeance for long-running blood feuds.

Shkurtan Hasanpapaj, 78, refers to herself in the masculine when she tells her story. She remembers becoming a burrneshë so that she could look after the cattle and play the flute. “When I was little, I didn’t want to take orders from anyone. That’s all there was to it.” And it seems that some women have adapted the tradition to suit their needs. Sultana Bici, 62, swore never to marry in order to stay with her disabled brother. To indicate her vow, she dressed in black from head to toe, but she didn’t renounce female clothing and kept her long hair. “Men hired me for the same jobs they did; that was enough.”

The sexual equality imposed by Communism eventually brought about a revolution in relations between men and women. According to Shkurtan, the change can be summed up in a single word. “Love,” she announces. “In my day romantic love didn’t exist, so it was easy for me to make the decision. Today a girl would be silly to give up on love. Sworn virgins are going to disappear.”