Meet the woman who was fired for being too 'irresistible'

An all-male jury stood by James Knight's decision to fire his 'exemplary' (and married) dental assistant because he found her too tempting. 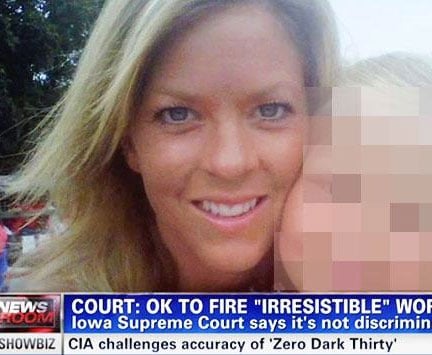 Melissa Nelson was fired because her boss, James Knight, found her too attractive (Photo CNN).

You might want to rethink that cute little summer dress you bought for work, you know, the sweet, conservative, perfectly appropriate one that nevertheless confirms your status as a woman with waist and hips and thighs and all those other potentially disturbing body parts.

A better choice might be a pair of scrubs, shapeless and gender-concealing. Oh, wait, maybe that’s not a good idea either because that’s what dental assistant Melissa Nelson says she typically wore to work over a 10-year period of “exemplary” service in the office of her boss, Iowa dentist James Knight.

He fired her, alleging that her clothes were “too tight and revealing…distracting” and as a result her “irresistible” presence threatened the well-being of his marriage. What’s more the Supreme Court of Iowa agreed with him in a recent ruling that upheld their previous conclusion, according to The Daily Mail.

Knight’s termination of Nelson, who challenged the legality of her dismissal, didn’t rise to the level of “unlawful gender discrimination,” the court ruled. Knight, the all-male jurists concurred, was “motivated by feelings and emotions and not gender.”

He didn’t fire her because she was a woman, said the court. He fired her because he admittedly found her attractive and was concerned that, despite their two-decade age difference, he might decide to have an affair with her, even though she indicated that she was happily married and viewed him as a “father figure.”

Her lack of interest in him as a potential sex partner seems to be a non-factor in all of this; apparently women are now to be held accountable not just for their own personal and professional behaviour but are somehow responsible for the moral shortcomings and inner churnings of their drooling supervisors.

According to several media accounts, Knight’s wife found about his little preoccupation with his longterm staffer and she was the one who demanded that he let Nelson go if he wanted to keep the marriage intact.

While Knight’s lawyer was quoted in December as heralding the initial ruling as a victory for “family values,” it’s hard not to think that if Knight’s wife was really so eager to show someone the door, she might have been better advised to start with her husband.

We can’t decide who is the most at fault here — the justice system, the dentist, or his wife! Tell us your thoughts in the comment section below.