Why you should probably be nice to your barista

Nicole Saltz was a barista for seven years. Now she's taking you behind the apron and revealing her well-kept secret. 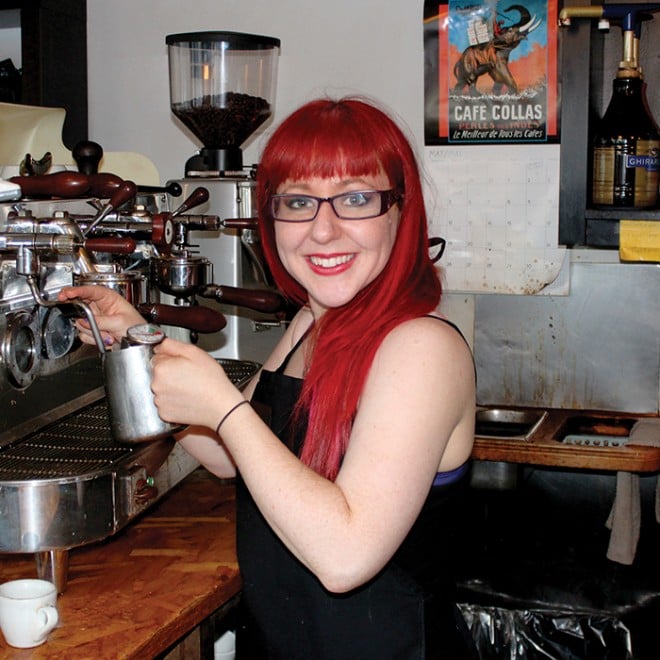 Like many writers before me, I’ve done some serious time slinging dark roast. I call it “doing time,” because that’s what it feels like when you’re longing to be recognized as a Dickens-meets-Dostoyevsky type but instead are referred to simply as “that girl who made my drink wrong.” Reality can be as bitter as a bad espresso.

As a barista, I started my day at 5:30 a.m., when we would begin prepping for the morning rush. At 5:50 a.m., the doors would start rattling like they do in horror movies, only the monsters outside were early risers desperate for their first fix. My colleagues and I pretended not to see them, knowing that eye contact with the un-caffeinated can be dangerous.

My favourite customers were the retired ladies in velour track suits who didn’t care if you were destined for literary greatness. They routinely sent back their lattes, insisting that this time they be extra-extra hot. Then there were the runners: packs of middle-aged men in spandex or short shorts (depending on the season), who inevitably stretched uncomfortably close to the windows of the café. When it came time to pay, they’d reach inside their tight Lycra suits and unapologetically hand over limp, sweat-drenched bills in return for their iced macchiatos.

My proudest accomplishment was the implementation of a secret barista policy. I called it Coffee Justice. It involved giving decaf to rude customers and full-fat milk if those customers appeared to be on their way to or from the gym. Rest assured, Coffee Justice is usually not deployed against the groggy, the tired or the rushed; rather it is reserved strictly for yellers, name-callers and the generally obnoxious. Take my former customer Mike. He was a morning regular. I was the morning barista. Mike would bark out his daily order while attempting to jump the line. He unwittingly drank decaf triple lattes for five years straight. I regret nothing.

Finally, after seven years grinding beans and sneezing out coffee grinds (a common barista experience), I quit my job to make a career of writing. I’m still working on my masterpiece, and I find myself doing a lot of my research on the other side of the countertop in neighbourhood cafés these days.

My order of choice is a single-shot extra-hot almond-milk latte, and I’m pretty sure I’ve never been served decaf. I often have to stop myself from wiping down the counters or suggesting a new drink idea to the person in line behind me. Of course I treat my baristas with the same respect I’d afford the Queen of England or Beyoncé, even when they make my drink wrong. After all, I didn’t do all that time just to drink decaf.