What it feels like to totally disconnect from city life

Brittany Mahaney had a nasty social-media habit she couldn’t kick — until she found she preferred the sound of birds singing to tweeting. 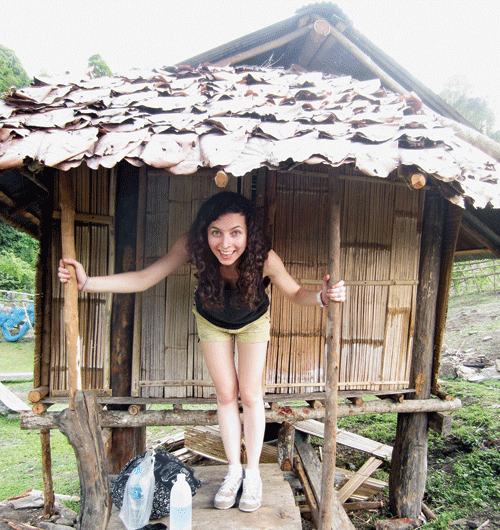 Brittany outside her sleeping quarters deep in the Thai jungle.

As I laboured through a remote area of jungle in Thailand, sweating profusely in the 38-degree heat, I compulsively reached for my iPhone to Instagram a photo of lychee trees for friends back home. Then I remembered — I hadn’t brought it with me.

Maybe I should actually start with “My name is Brittany and I’m a social-media addict.” It’s my job, really. I’m a digital strategist, Twitter-obsessed and renowned for my witty status updates.

I had spent my entire six-week backpacking holiday in Asia so far flooding my feeds with musings about tuk-tuks and temples. Lucy, the close friend I was travelling with, was growing increasingly irritated by my social-media obsession. Her plan to cure me: a daylong trek to a remote Lahu hill-tribe village.

While our guide,“Jungle King,” swatted away stray branches and biting flies, I caught myself crafting the perfect tweet in my head: “38 degrees. 15 mosquito bites. One #QueenOfTheJungle. Will I survive?”

After four hours of hiking, we finally arrived in the village. Jungle King gestured toward a hut just big enough to fit two sleeping bags. “This is your five-star hotel,” he laughed. Our toilet was a hole in the ground, and we were to shower in a nearby waterfall. No electricity. No running water. No technology.

After a sunset meal of rice with curry and fresh, locally grown vegetables, Jungle King opened a beer and sat down with us under the stars to chat. He told us he’d tried city life but didn’t like it. “City people are so dependent on technology that when they travel to the jungle it’s difficult to adjust,” he said, explaining that for him, it’s the opposite. For him, modern “necessities” are convenient, but not worth the stress of finding a job and relying on technology for everything. He said being self-sufficient is liberating, because you don’t have to depend on anyone or anything else.

I suddenly realized that I experience the world through the lens of an Instagram filter and feel a constant pressure to be “on,” tweeting every thought and labouring over hourly status updates. Yet here I was without any phone buzzing beside me — and I felt more connected than ever.

That night in the Lahu village gave my brain a chance to turn off and probably saved my friendship with Lucy — and I doubt my Twitter followers missed me for a second. When the roosters crowed the next morning, I slung my heavy backpack on my shoulder but felt lighter than I had in years. Hiking down the mountain, I gazed at the view, and I swear I wouldn’t have tweeted it for the world.