When Rhonda Wiles was told it would be unlikely she could carry a baby past 20 weeks, they looked to India for a surrogate. Here she shares her inspiring story. 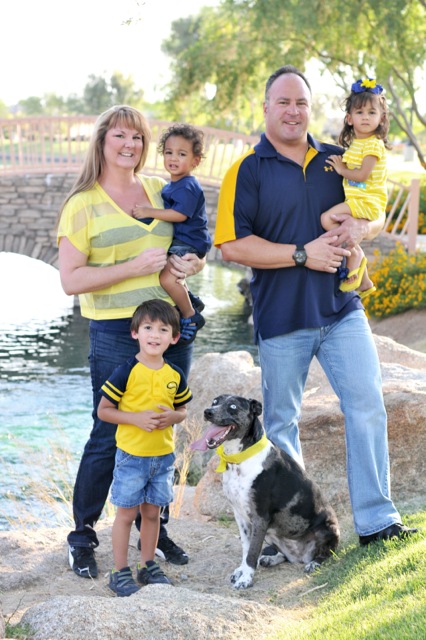 Rhonda and Gerry Wile with kids

In Leslie Morgan Steiner’s new book, The Baby Chase: How Surrogacy is Transforming the American Family, she explores both sides of the equation, both parents and the gestational carriers. One of the couples she profiles are Rhonda and Gerry Wile, a Canadian couple living in Arizona, desperate to start a family but limited in their options. And so they turned to surrogacy in India to have their first baby, Blaze, and then twins, Dylan and Jett. Here, Rhonda describes how they came to use Indian surrogates, and what it felt like when that baby was finally placed in her arms.

We were trying to get pregnant, and after a miscarriage I found out that I was unlikely to carry a baby past 20 weeks. We started looking into other options, and several doctors recommended surrogacy. One of the women I worked with at the time had acted as a surrogate, and she told us the ballpark amount for surrogacy services was $80,000 to $150,000 — so there was no way we could afford that as a nurse and a firefighter. But I knew this couldn’t be the end of our journey. So I took to the Internet and found a show that Oprah did years and years ago about surrogates in India. The show mentioned a clinic located in Mumbai. Their bottom rate started at $26,000, plus travel and living expenses. My husband called and spent an hour on the phone, and everything they said just clicked with us. They said we could have a baby by the end of the year.

Three months later, we were on a plane. It was my first time outside of North America. The closest I had ever been to the developing world was Mexico. This was something completely different, and I was immediately on sensory overload. The humidity, the smells, the masses of people — it all hits you in the face. After a couple of days, the beautiful colours and the culture and the kindness all began to set in. People on the street smile at you. It was an incredible cultural experience.

We had to choose a surrogate. The company has a whole website of profiles with photos, heights, their gynaecological history, their family and an explanation of why they want to do this. The information on the surrogates is less detailed than in the U.S. because a lot of the women lack information about their own medical history. They asked us to pick at least three so we would have a couple of backups in case our first choice didn’t work out. We were coming so far, and they wanted to make sure things went as smoothly as possible. Our first meeting with a surrogate happened over lunch, with us, a translator and her entire family. We brought gifts from Arizona: a watch for her husband and backpacks for her son and daughter. We really wanted to show our appreciation. It was a strange feeling to know that this person is about to give you the biggest gift anyone can possibly give, something that will change your life forever.

We did two cycles of IVF and made good embryos, but they didn’t result in a positive pregnancy. The negatives were really the hardest part, and I relied on my husband a lot to keep me going. Eventually, we decided to use an egg donor — which was something I didn’t really want to do. But my husband said, “Rhonda, do you want your baby or do you want a family?” And I knew that I wanted a family. We chose an Indian egg donor, which seemed to make sense because of the bond we had already established with the country.

I know that there’s a perception that using a surrogate in India is exploitation because it’s a poor country and women have lower social status than men. People assume these women are being forced into this. But after being there, after seeing the surrogates and meeting the doctors, you realize how professional it is. Very few surrogates anywhere do it for altruistic reasons — it’s almost always for the money, even in the United States.

Blaze was born in August, and he was a couple weeks early. They try to coordinate it so you’re there a few days before the birth, so we got to be there. We got to go into the labour suite and feel the baby kick. If she had Blaze naturally, I would have been able to go and watch him being born, but he had the cord around his neck so he was a C-section. As soon as he was born, they brought him out and put him in my arms and it was the most amazing moment of my life. We were really crushed when we initially found out that we would have to go the surrogacy route, and I remember something our OBGYN told us. He has his own kids, a mix of biological and adopted, and he said that it makes no difference when someone puts that baby in your arms. It was absolutely true. I was holding him, and my husband was standing over my shoulder and whispered his name, Blaze. The baby looked right up at him. That was so emotional.