When Alexis Calice and her family moved to Nairobi they did not expect gunfire, armed gangs and a militant siege. 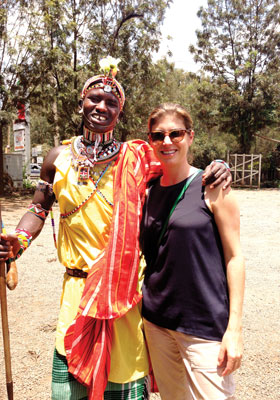 The author, Alexis Calice, with a Masai in Nairobi National Park.

September 21 was just another sunny Saturday until all hell broke loose. I woke up early to explore Nairobi National Park with my husband and two children, Zeno, 6, and Eleonore, 8. We’d moved to Kenya a month earlier from the U.K. for my husband’s work, and our kids couldn’t wait to see the wildlife. Little did we know that while we were driving among the zebras and giraffes, gunmen were opening fire at Westgate Mall, less than a mile from our new home. We were blissfully unaware until we arrived at some friends’ house for lunch. “Something’s happening at Westgate,” they told us. “They’re saying an armed gang tried to rob a shop or something.”

I’d been to Westgate several times since our move; it was our neighbourhood shopping centre. Malls here are an emblem of Kenya’s economic prosperity and modernity. And they’re almost unavoidable, because most goods and services, as well as cafés and restaurants, are in them. Westgate, in particular, always struck me as bustling and upscale with a diverse cultural mix. Arab and African Muslims, Indians, black Kenyans, white Europeans all went there. It was a true cross-section of Nairobi society.

After learning of the shooting, we spent the next 24 hours glued to the news, hunkered down in the house, phoning friends and family. By then we knew the mall had been taken over by the Somali terrorist group al-Shabab. Most Kenyans believed the government wasn’t giving accurate information and was lying to cover up its own incompetence. Witnesses who had escaped from the mall — including parents from my son’s school — told of terrorists quizzing Muslims on their knowledge of the Quran, and of a Muslim woman who was shot, purportedly for not wearing her hijab. There was (and still is) talk of beheadings and hangings of hostages, and of first responders looting and stealing from the dead, and of the confusion and unpreparedness of Kenyan forces.

On the third day of the siege we awoke to rapid bursts of gunfire that seemed to be coming from the woods next to our house. My first thought was, “Could a military exercise be going on at 6 a.m. in the woods?” Then I realized that the sound was coming from Westgate, a mile in the opposite direction, and bouncing off the morning cloud cover. My daughter was nervous. “Mommy, I hate guns,” she said. Later that morning we heard about people we knew who’d been caught up in the violence: My landlord’s son-in-law was shot, a friend’s work colleague was killed, a grade 9 girl from my son’s school and her mother were shot and killed. Zeno’s school sent out an email appealing for information, as several people from the community were missing. 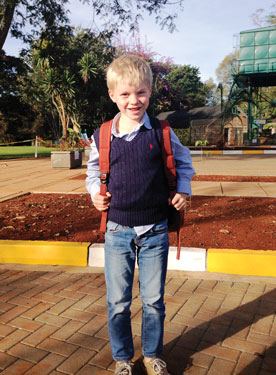 Before the attack: Zeno on his way to the International School of Kenya.

Many parents kept their children at home, but I sent  Zeno to school. He told me everyone in his class made a card for a boy in grade 3 who’d been shot and was in the hospital. Zeno wasn’t upset; in fact, he seemed surprisingly unfazed. I think he’s too young to fully understand what was happening. I did keep some details from my children even though they’re aware of the greater threat of violence here compared to back home.

Our house in Nairobi has panic buttons throughout, and I had to explain to them that if there was any danger they’d have to run to my bathroom, which has a special reinforced metal door. I then practised it with them, which was an odd moment as a parent. I felt as though they were moving from innocence to experience. I’d been told endless stories of armed gangs making the rounds in gated communities, been given advice on how to deal with carjackings and heard about children being kidnapped on their way home from school.

Security is a big issue here — and big business. There is no 911 number to call, and police are known to be corrupt. As a result, middle-class people have a siege mentality: They live in gated communities or behind high brick walls lined by electric wire, with 24-hour security guards.

Two weeks later, as we were beginning to settle back into a normal routine, there was violence in the coastal city of Mombassa: a shooting of an Islamic cleric rumoured to have links with al-Shabab, followed by deadly riots. A warning against travel to the Kenyan coast was issued by the American government. At dawn on Saturday, October 5, there was an American commando raid on the Somali coast (and another in Libya), an attempt to capture or kill a Somali who was a known agent for both al-Shabab and al-Qaeda and who had planned violence abroad. The man has not been tied to Westgate, but it feels to many like an increase in counterterrorism efforts, at least by the U.S. (It may just be wishful thinking on my part.)

The mall attack was a shocking escalation in scope and brutality. Kenyans are questioning whether their government can prevent future acts of terror. Locals have told me that their biggest problem in tackling terrorism is corruption: The long porous border with Somalia cannot be secured, and anything and anyone can be smuggled into Kenya, because the border police can be bought.

Meanwhile, in the aftermath of the attack the general public is expressing its outrage at the Kenyan military, specifically at their methodical looting of the mall. There are lots of rumours swirling around. We still don’t know how many terrorists there were, who they were, how many managed to escape or how many victims were involved; the Red Cross and the government have released different numbers.

In spite of everything that’s happened, we’re here for the foreseeable future. That said, I’ve decided if there’s another attack, we’re leaving. Unlike most foreigners, we’ve chosen not to live behind barbed wire. We’re in an expat community that looks out onto forests. I’m more vigilant now, but I’m trying to get on with things, even if it means living with less certainty. I’ve taken a page from veteran expats and local residents who say you just can’t live in fear. 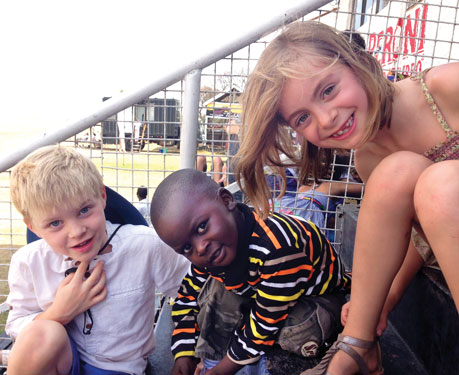