He lost over 80 lbs, then he divorced his wife

When Gwen Dundonald’s husband shed weight, he also shed her. He couldn’t understand how she could ever have loved the fat man he once was. 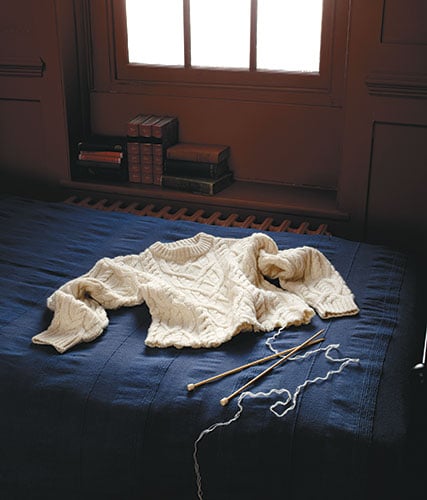 Lying in bed in those first few hazy weeks of new love, I asked B the usual questions one asks a new partner : “Would you love me if I lost my legs? Went blind? Grew antlers? Gained 300 pounds? Danced like those weird hippie girls who swoop their arms a lot at concerts? Converted to Scientology?” (He actually had to start limiting them to three a day, so I chose carefully. His answer to every one was yes, yes and yes.) We firmly established that he would love me no matter what form my transformation took. Silly girl. I never asked if he would still love me if he was the one to change, but I didn’t because I just assumed he would.

There’s an urban legend in the knitting world called the Boyfriend Sweater Curse. The story goes that you should never knit a sweater for your man, because when it’s done, he’ll break up with you. Ridiculous, I thought, so I knit my husband a sweater. Then he started to lose weight. Soon, the cardigan was comically large. He would put it on and sway from side to side as it rang like a bell against his torso. We would laugh – the sweater became his “Can you believe I used to fit into these pants?” comedy prop. I painstakingly ripped the sweater out and started again, this time carefully, repeatedly measuring his ever-shrinking body and adjusting as I went. Finally, he had his sweater, a beautiful, perfectly fitting sweater for his new thinner-than-ever-before body. Two weeks later, he asked for a divorce.

My first few boyfriends had been skinny, but the first time I hugged a big guy, my heart melted. I felt enveloped, contained, collected. Friends joked that they would buy me a “Dip me in honey and throw me to the bears” T-shirt. B was a big guy—close to 300 pounds. Every time I told him he looked good, he would grimace. We had to stop going to an Italian restaurant near our home, because he was convinced the waiters were laughing at us, saying, “Why is she with him?” He told me once of riding his bike past a guy who hissed “Fat ass” at him. Those stories enraged me, made me hold him tighter. I told him over and over how beautiful I found him—just the way he was.

We’d been married for a few years when we decided to start running. Me, to shake off the winter blues; him, to get healthier. Our first run had both of us panting around a small track in a schoolyard near our house. When we finished, we were drenched in sweat despite the cold and proud of ourselves. After completing a Couch-to-5K program, I returned happily to the couch while he kept going. Running led to intense cycling, which led to a change in his eating habits. Raw almonds replaced crullers; salads replaced chicken wings; and within mere months, he had lost an amazing 80 pounds. He walked with new purpose. I helped him pick out a new wardrobe. Girls started checking him out on the street, I noticed, and he noticed even more.

As his body shrank, so too did his focus on me. He became consumed with working out, and I, used to being the Thing That Made Him Happy, found myself desperately trying to claw back into the light. His hilariousness went away too. Maybe he was hungry all the time. Maybe he felt that he didn’t need to be anymore; funny was for fat guys, and slim dudes just needed to not be fat. My adoring husband became a miserable, silent fury.

I never say to people who have lost weight, “God, you look great.” Because what does that say? That they didn’t look great before? Bullshit. I said I was pleased he had more energy, that I was delighted he felt happier with his body. But one night he asked me, genuinely perplexed, “How is this not an upgrade for you?” I told him that the shape of a person didn’t matter to me. He paused. “What is wrong with you that you were attracted to that?” he asked. His old body was disgusting, he thought (confirmed by the number of people who told him how great he looked now). What kind of messed-up woman is attracted to a fat man? He shrank and shrank and then he left .

I heard somewhere once that the biggest side effect of substantial weight loss is divorce. There are lots of reasons: Perhaps the person had married when their self-esteem was low, and they now realized that they could “do better .” Maybe they were both heavy, and the newly thin person is worried that their still-heavy partner will sabotage them. Maybe they want to make up for missed opportunities and sow some wild oats.

B never told me the reason he left , but I can guess that it’s the latter: He’d never picked up a girl in a bar, never walked up to one at a party, never smiled at one on the street. He suddenly felt like he had sexual currency and, I think, wanted to splash it around like a dot-com billionaire. I think he wanted to start fresh with a new job, new friends and a new girl who hadn’t known him when he was big. I think he thought I was gross for liking him before. And I think of shows like The Biggest Loser, where they show photos of the fat guy, usually holding a baby or wearing a Santa hat. The sad music makes it clear: He is miserable, because he is fat. But maybe he wasn’t. Maybe that moment of holding a baby was the happiest of his life. But no: Fat equals sad and thin means happy, and if you used to be fat then you must have been miserable. Jettison your life, boy, because now that you’re thin, your real life can start. Thank God.

So we divorced and pretty much never spoke again. I see him from time to time, and he wafts past me like a ghost, like we never met. His head sinks down toward his shoulders like an animal that doesn’t want to be spotted. He is heavier than he was when he left , but not as heavy as he was when he loved me. I have no idea if he’s happy.

Good news, though: I am. Divorce plumb near destroyed me, but I Gloria Gaynored. I have a lovely boyfriend (a medium-sized one, for the record, so handsome that I suspect people whisper, “What’s he doing with her?”) who is happy in his skin. He would love me if I grew antlers.