Wearing hijabs: How a girls' soccer team changed the rules

Samah Aidah was benched for wearing a headscarf at her high school soccer match. This is how her teammates responded. 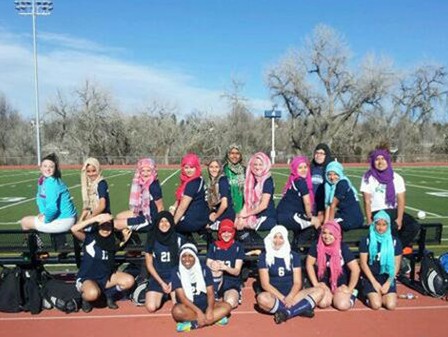 Fighting for everyone’s right to play.

It started as a friendly game of high school soccer in Aurora, Colorado, until Samah Aidah was benched for wearing her hijab. The refs deemed it “dangerous.” Their call came on the heels of a ruling from world soccer’s governing body, FIFA, which had lifted a seven-year ban on players wearing turbans and hijabs after a two-year trial period. Players had been allowed to wear “sport-specific head scarves” during that time as a test — no one was ever injured.

Samah’s teammates were outraged. In a show of support they all wore head scarves to their next game. A picture of the team tweeted by one of the players, Divine Davis, in March went viral with more than 20,000 retweets. “The refs wouldn’t let Samah play with her hijab, so today we all wore one for the game #lovemyteam #letsamahplay.” Even the opposing team showed support, saying the girls had “a lot of class.”

Understanding for women who wear hijabs is rare these days, even in Canada. In fall 2013 the Parti Québécois proposed a secular charter that would have made wearing hijabs in the public sector illegal. In December, Sama Al-Obaidy was attacked while in the Montreal subway by a woman who tried to forcefully remove her hijab, telling her she didn’t belong in Quebec.

Thanks to Samah’s teammates, the referees relented and let the girls play. It’s been reported that Colorado high school referees are looking at amending the rules to allow for hijabs on the field. Even though the team lost that day, they got the attention of thousands of people around the world, raising awareness.

In the words of one Twitter supporter, @samreennnnn: “You all might have been players. But you guys just became a team.”