What it feels like to survive a devastating typhoon

Elaine Springgay, a 30-year-old volunteer from Richmond, B.C., would have died when Typhoon Haiyan hit the Philippines had a split-second decision not saved her life. 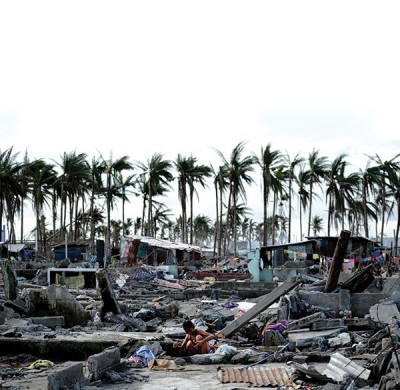 On Wednesday, November 6, 2013, I was at a conference in Tacloban City in the Philippines. (I volunteer with Cuso International, an agency that works on reducing poverty worldwide.) Suddenly, the coordinator stepped up to the mike. The conference was over, he said. A huge storm was approaching, and we all needed to get to safety.

At first, my friends who’d organized the event were miffed that all their hard work was going down the drain. After all, the storm might not materialize — the Philippines receives tropical storm warnings all the time, and people have become used to it. Besides, it was a beautifully sunny day with clear skies.

I texted my boyfriend, who is in the Peace Corps and was stationed on a nearby island, and he told me I should stay put. I headed back to the dorm I was staying in and looked up the latest weather alerts. A storm was definitely on its way, and what worried me most was that the city was right in its path.

I stayed up all night, glued to weather alerts from the U.S. Navy. By Thursday morning, they were predicting that the winds would be category 5, or 280 km/h — enough speed to pick up and move a bulldozer. And it looked as though Tacloban City would be hit hardest.

Right then I made up my mind: I needed to leave and head home to Paranas, a town two hours from Tacloban. I pleaded with my roommate to get out too and am now so grateful she listened. (She has since told me that I saved her life that day.) 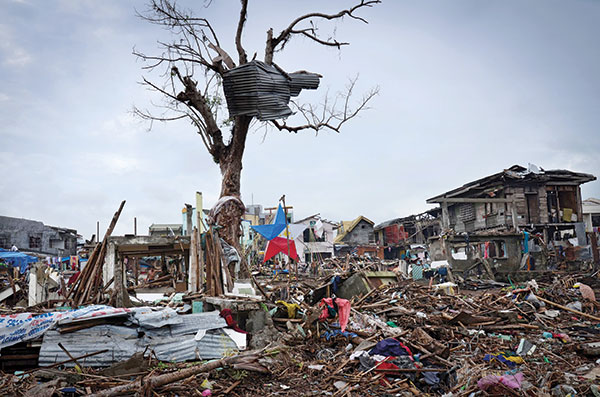 A giant Christmas star decorated with the Phillipines flag sits among the debris on Christmas Eve. Photo, Dondi Tawatao/Getty Images.

It was already raining by the time I got in my van. The drive was one of the most stressful of my life. When I got home, I dashed around the house, taping up windows. At 3 a.m., I woke with a start — my electric fan had stopped working. The power was out: Typhoon Haiyan had officially arrived.

By 8 a.m. I could hear my neighbours’ doors slamming in the wind. I peered out my bedroom window —  my closest neighbour’s roof was flapping wildly. Not long after that, I saw him up on his roof, trying to hammer it back into place without being blown off.

I thought about hiding in the basement, but I was terrified of flooding. At first I stayed in bed, but I realized that if the window shattered and debris flew in, I’d be in grave danger. So I grabbed a second mattress, placing one on the floor with the second leaning over me against the bed frame, like the forts I made when I was a kid.

I texted my mom to say I loved her; then I lost cell reception. The deafening noise of the wind and the crashing and banging seemed to go on forever, but around 11 a.m. it was suddenly still. I stepped outside to see trees uprooted and chaos everywhere.

I spent the next day and a half in a bubble. With no reception or electricity, we had no way of communicating with anyone outside of the community. We shared what food we had; I broke up a package of doughnuts and distributed them among my neighbours. Finally, stories of the damage in Tacloban City came trickling in: Houses had washed away, neighbourhoods were completely destroyed, thousands were dead. One co-worker told me he drove into the city on his motorbike and started counting the bodies by the side of the road. He stopped at 56. There were reports of looting — people were stealing washers and dryers from store display windows. 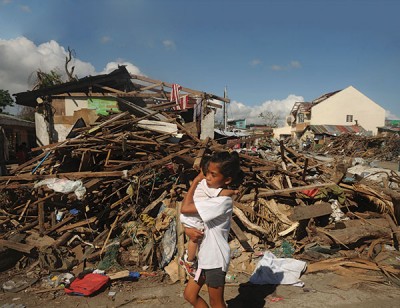 A girl carries a baby as she walks by destroyed houses in Tacloban City. Photo, Noel Celis/Stringer/Getty Images.

I made a list of about 20 friends and co-workers I needed to reach. On Sunday, I hopped into a passing Jeep, hoping to find an area with reception. Cellphone in hand, when I finally saw my reception bars appear, I shouted at the driver to stop. I sat on the side of the road, texting with friends and family to let them know I was alive and to see if my list of 20 were okay.

I hadn’t realized how concerned my relatives were when they didn’t hear from me. My older brother was a wreck, glued to CNN 24-7, and my boyfriend had contacted the army to try to have me evacuated when he thought I was still in Tacloban. When I texted my mom that day, her immediate response was “Thank God.”

The weeks after the typhoon were traumatic. I learned the dorm we’d been in had completely flooded — anyone who’d stayed behind didn’t survive. Friends in the Peace Corps are now beginning to show signs of PTSD from what they went through in the city. When I finally got out and reached Manila, I suffered from severe insomnia — I could sleep for no more than three hours at a time. Even now, I still wake up a few times a night.

My biggest regret is not convincing more people to leave the city that Thursday. Typhoon Haiyan was one of the deadliest storms to ever make landfall, and the aftermath is almost impossible to comprehend. Buildings were completely flattened by the 300-km winds, trees were smashed like matchsticks, and the bloated bodies of goats, dogs and people were washing up on the shore. Three months later, almost half the city has no power and bodies are still being pulled from the ruins.

I’m now safely back in Canada, where we recently endured a deep freeze, and many parts of the country suffered power outages. But the use of the word catastrophic by media and government officials to describe the situation here frustrates me. Lacking food, clean running water and shelter while the stench of dead bodies is thick in the air is catastrophic. It’s so easy to move on and forget a disaster once it’s left the headlines, but the repercussions and suffering will be felt for years to come by the people of the Philippines.

Donate to relief efforts at redcross.ca/donate.