When Priscila Uppal was eight years old, her mother left Priscila and her brother to be raised by their quadriplegic father. Twenty years later, she's reunited with the woman who abandoned her. 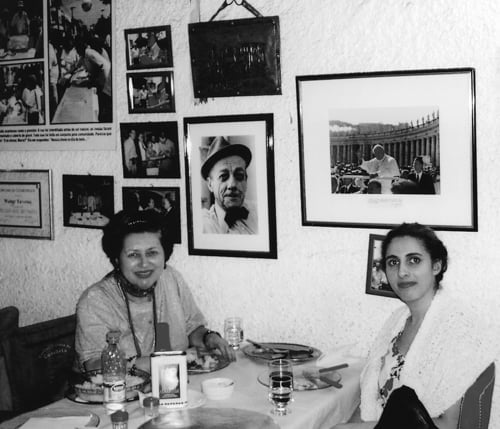 Priscilla Uppal and her mother

Priscila Uppal, poet and professor at York University, was just eight years old when her mother packed up and moved back to Brazil – leaving Priscila and her brother to be raised by their quadriplegic father. For 20 years, she heard nothing from her mother. Uppal recently published a book, Projection: Encounters with my Runaway Mother, about her attempt, decades later, to reunite with the mother who left her behind. And here, she describes what it’s like to reunite with a mother who’s a stranger.

My father worked for the Canadian government and on a trip to Antigua, he was in a sailboat that tipped over and he swallowed contaminated water that attacked his immune system. Within 48 hours, he was a quadriplegic. I was two, so I don’t have any clear memories of my father walking

Six years later, my mother, who had gradually been losing a grip on herself as she dealt with the difficulties of a quadriplegic husband and trying to raise a family, was having mood swings and exhibiting very erratic behaviour. One day, she drained our bank accounts – including my piggy bank – and bought a plane ticket to Brazil. That was the last time I saw or heard from her in 20 years.

I had very mixed emotions. I was angry and upset that my mother had abandoned us and left a quadriplegic to raise two children – for which he was not equipped physically, emotionally or financially. A lot of people leave their marriages, but she severed all ties and disappeared.

When people found out I didn’t have a mother, they often looked at me like I was some alien life form – like there must be something wrong with me for my mother, after knowing me for eight years, to leave. I was so curious about other people’s families, and I was that kid who was always trying to get invited to dinner. I wanted to see how other people lived. It really reinforced that my own home life was quite tragic and weird.

Twenty years later, in 2002, I was on the Internet looking for reviews of my first novel. I came across a link to a website that had both my name and my brother’s name, and when I clicked on it, it took me to my mother’s personal website as a film critic in Brazil. The site had pictures of me and my brother, and lots of personal information – including thanking her cancer doctors for taking such good care of her. I was in complete shock. I had always planned to go and find my mother, and, learning that she had a very serious disease, I figured that I should take my chance to go meet her. I was hoping to have my mother to explain to me why she did what she did. I wanted her to tell me who she was. I hope that once I knew her story, I would have some sort of relationship with the real person and not just some figment of my imagination.

I called and left a voicemail message for her, and she called me back a while later. My mother was over-the-top effusive, encouraging me to come. She kept calling me “my angel,” and telling me not to pack because she wanted to buy me all new things. I tried to take it as a good sign, but it was a little off-putting coming from someone I just assumed didn’t love me. I got on a plane and met her in Sao Paulo, where she was working, and we later went to Brazilia, where she and the rest of her family live.

I arrived in the airport to find her dressed in the exact clothes I remembered: loud style from the seventies. Over the course of the trip, I discovered that my mother, the film critic, sees multiple films a day and lives in a fantasy world so that she doesn’t have to remember her past. As I asked her questions about her life, trying to find out what happened to her, she kept blocking me. Because even she doesn’t want to know who she is, and she has spent decades trying to put that away. She wanted a reunion like she had seen in movies – that I would come to Brazil and we would hug and then we would have a barbecue – but that’s not how it works for most people. I was trying to get to know her, but I eventually came to realize that her coping mechanism was escape from reality. Seeing me cracked her facade, and she was confronted by the fact that she hadn’t been there for me. She didn’t take it very well, and it was very difficult for both of us.

My mother followed me everywhere, desperate for me to tell her that I liked her and loved her. I couldn’t do it even though I wanted to because I didn’t even know her. By the end of the trip, it was clear that we wouldn’t stay in contact. My mother isn’t capable of a healthy, honest relationship. The things I wanted from a mother – like nurturing and learning how to live in the world – I got from other people. Over the course of the trip, we were really learning how to say goodbye to each other. At the airport, when I was leaving, my mother told me that she would erase me from her mind. But she had already done that. Whoever she was imagining for those 20 years wasn’t me.