The chef and author's husband has come under fire after photos of him grabbing her neck at a U.K.-based restaurant surfaced. 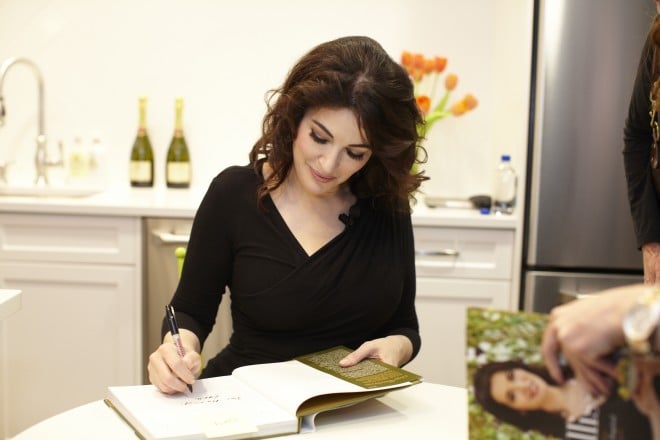 Recently while grocery shopping I witnessed an elderly couple squabble on their way toward the grocery carts. The man, who I assumed was the elderly woman’s husband, was particularly brutal in his treatment of the woman, who I assumed was his wife. He yelled at her in a harsh, loud tone as if she were a stupid child and scowled at her like a mean dad. The woman remained quiet, paralyzed by embarrassment or perhaps inured to his rough treatment.

I didn’t like what I saw or heard. My heart went out to the woman and I felt like throwing one of my heirloom tomatoes at the jerky husband. I didn’t though. I kept walking toward the parking lot.

I felt much the same way — disturbed, confused, angry at a jerky man and like I’d seen something I shouldn’t have but wanted to do something about — when I saw tabloid photos of what appears to be a public argument between celebrity cookbook author and TV star Nigella Lawson and her husband of 10 years, art collector Charles Saatchi.

According to Us Weekly, the photos were reportedly snapped outside a pricey London restaurant where Lawson and her husband were dining al fresco two weeks ago. The images depict Lawson and her husband engaged in what appears to be an intense marital spat. A few times Saatchi reaches over and puts his hand around Lawson’s neck. For her part, Lawson looks tearful and upset in the photos.

Lawson has so far remained mum on the photos and the circumstances surrounding the dispute. Reportedly, she left the home the couple share with her teenage children the day before the photos were released and has yet to return.

Saatchi, however, has tried to explain the photos. He told the Evening Standard that the images, while “horrific”, depict a “playful tiff”.

That tiff, says Saatchi was an “intense debate about the children”. Saatchi says that he, “held Nigella’s neck repeatedly while attempting to emphasise my point.”

Moreover, he says Lawson’s tears were simply the result of her sensitivity: “Nigella’s tears were because we both hate arguing, not because she had been hurt,” he told the newspaper.

Saatchi’s explanation rings hollow. Not because it feels untrue — at least from his perspective — but rather because his justification for stepping over the line with his wife sounds very much like the kind of thing you hear from the habitually badly behaved, from domestic bullies who lose their temper and with it all sense of what’s right and wrong.

One would hope that he might have been more reflective about his actions and his behaviour. Maybe he ought to consider exactly why his wife doesn’t like to argue with him (could it be because he is too volatile for an adult exchange?). More important, he might want to expand his definition of the word ‘hurt’ to include emotional pain. Finally, maybe somebody ought to emphasize a point with him in a similar manner so he gets a sense of what it feels like.

If the incident doesn’t result in an epiphany for Saatchi, perhaps his recent visit to the police might be illuminating. They might be able to clue him in on the definition of a playful tiff versus a physical assault.

What are your thoughts on the situation? Tell us in the comment section below.