My daughter's severe autism and how she found her voice

Carly has autism so severe she is unable to speak. When she learned how to type, her words took everyone’s breath away. 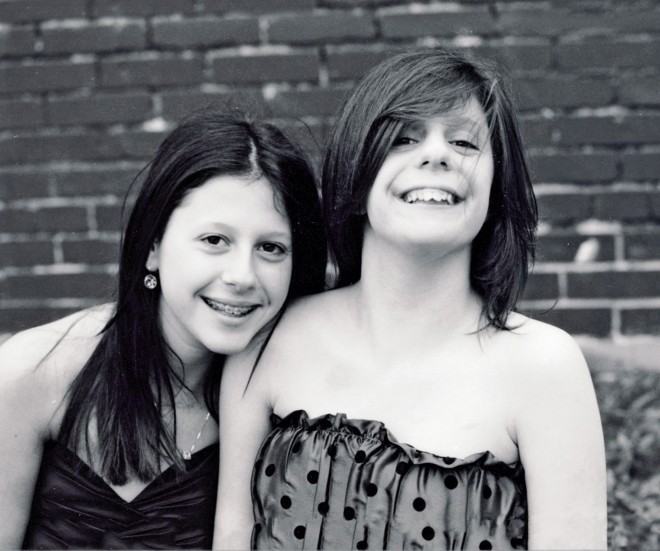 Epiphanies are tricky things. They are reputed to bring clarity and peace and show us the road forward. But they can also lead to dark, seething places.

When our twins were born in 1995, my wife, Tammy, and I were ready for a fresh start. First we had coped with the sudden passing of Tammy’s mother in 1989. A few months later, our son, Matthew, was born and was soon plagued with respiratory issues. Then over the next four years came a series of miscarriages.

Finally, after a course of treatment for what’s known as a luteal-phase defect, my wife gave birth to our daughters. We considered naming them after the medication that enabled their successful birth, but Clomid and Progesterone Fleischmann would have been a cruel fate, so we settled on Carly and Taryn.

Taryn left the womb smiling. With a dark cap of hair and laughing eyes, she was cracking jokes before she could speak. Carly, who had been the feistier in utero, seemed to look around and say, “I’m in the wrong place.” This world would never be in step with our little girl. By age two, Carly had been diagnosed with autism, developmental delay and oral-motor apraxia, a neurological condition preventing speech. “Stay in her face,” our developmental pediatrician said. “It will be like climbing up a ladder. How far she goes, only time will tell.”

So we climbed what would prove to be a well-greased ladder. Physical and occupational therapies to help her stand, walk and eventually feed herself. Behavioural therapy (known as applied behaviour analysis) to help Carly learn basic skills, master her sensory-integration issues and cope with a world that seemed to be screaming at her. Taryn was speaking, dressing herself, going to play groups and dance classes. Carly went to therapy sessions, bleated, screamed and never ever stopped moving. Her actions were feral and, if not tightly monitored, destructive. Left unattended, she emptied containers of baby powder, smeared peanut butter on the furniture and overflowed bathtubs. One evening she slipped out of the house at dusk and crossed four city blocks before we found her stripped naked at her favourite park.

Nights were an endless, gauzy whirl of remaking her bed, tucking her in and practically holding her in place until she’d finally drift off to sleep at 4 or 5 a.m. Her rocking and bouncing were so constant and violent, we had to reinforce her bed frame with steel bars after she shattered the solid-oak bed. To this day I don’t know how we survived 10 years on two or three hours of sleep each night.

By age seven or eight, it was clear that Carly would not make the types of gains we had seen in other children struggling with this mysterious condition. “You may want to consider residential placement, when the time comes,” our psychologist recommended vaguely. I’m sure she was being sympathetic, but this was not the insight either my wife or I wanted to hear. So with few options and an illogical belief that there was a more human, capable and intelligent Carly somewhere inside this whirling dervish, we persevered. After all, she was demonstrating signs of academic capacity at the special-needs school she attended and with her therapists, with whom she worked every single day.

In March of 2005, Tammy, Matthew, Taryn and I were away for spring break. (We had long ago abandoned the notion of a true family holiday due to the logistics and trauma of travel with Carly.) As we travelled from the rim of the Grand Canyon toward Phoenix, my cell rang. “Carly’s been typing all day,” said Howard Dalal, her devoted behavioural therapist and companion. He and Barb Nash-Fenton, Carly’s speech-language pathologist, had been toiling away all morning when Carly grabbed her augmentative communication device and tapped out the words “help-teeth-hurt.”

They were breathless and giggling like children as they repeated the story to us. We wanted to believe them, but without seeing it for ourselves we were skeptical. Given our years of noisy silence we could sooner believe the family cat could type.

But type Carly did. Although in the early years her communication would be halting, terse-phrased and sometimes non-existent, she had found what she would eventually call her “inner voice.”

In the months leading up to the girls’ b’not mitzvah, in January 2008, Barb and Howie were adamant that Carly have a speaking role. “She can write a speech,” Barb told us. Carly laboured for weeks, as the pace of her typing was (and still is) glacial. She is able to use only her index finger on her right hand to type. But when she writes, her sentences are fully formed, insightful and witty.

Carly requested that we petition her heroine, Ellen DeGeneres, to read her speech for her. My wife is a master of exploiting the six degrees of separation that connect the world. Through some well-placed calls to friends and strangers, we were successful, and Ellen recorded the speech on video.

When the time came for speeches and toasts, my wife stood up to speak. “I’d like to thank our friends who helped us accomplish what you’re about to see,” she told the packed ballroom. “We’re told it takes a village to raise a child, but with Carly it’s taken an army and we couldn’t have done this without you.”

The lights dimmed and Ellen’s image shimmered on a 10-foot screen erected for the event. Perched in her signature chair on her festive holiday studio set, Ellen spoke directly into the camera. “The words I’m about to read are Carly’s,” she said before starting.

“I am delighted to be here,” Carly’s speech began. “I really don’t know what to say but thank you for coming. It’s been four months that I have been working hard on this speech and I hope you like it. I was hoping to read this speech to you. But I can’t, so I asked someone who makes me smile to read it for me.

“I have to tell you, I cheated and looked at some other girl’s speech and she thanked everyone who came from out of town. I was told that people are coming on planes and trains just to see me. Okay, you can go now!”

At that, Ellen cocked her eyebrows and smiled. “That’s funny.” She continued: “I know I might act or look silly to some of you, but I have autism that makes me act this way. A lot of kids and older people have autism, too. I am not the only one. Autism is hard because you want to act one way but you can’t always do that. It’s sad because people don’t know that sometimes I can’t stop myself and they get mad at me.”

Carly went on to explain that she would like to be like everyone else, though she would miss that which makes her unique. She movingly thanked her family and Howie and Barb for their tireless efforts and understanding and went on to talk about acts of kindness.

“What I am going to talk about really should not be just for Jewish people, it should be for the whole world. It is called tzedakah. It is when we are giving not just things like cookies, but giving of ourselves.

“If everyone in the world did one nice thing for someone other than yourself the world would be a nicer place. I can’t say that we should be nice all the time because I think it’s sort of like me. I can’t help it when I do things, but I think we should try hard to be nice when we can.

“I would like to make people in the world happier so I made cookies with Dad for people who don’t have food. It must be sad not to have food. I love food. I think I would be happy if someone took time from their day to make food for me; then maybe I would want to do something good for someone else. It was lots of fun and rewarding knowing that I made cookies for people who really needed them and that’s why I did not eat all of them. I gave the men the cookies and they were happy to get them. The strange thing is even though it was my project, my whole family took part in it one way or the other.”

She concluded by saying, “Okay, I thanked everyone for coming, I talked about autism and my Jewish topic but how should I end this? I know. A wise woman once said that if you don’t have anything else to say then you should just do one thing. Dance. Have lots of fun. I know I will.”

As I watched, I slipped my arm around Tammy. Although I had seen the video numerous times (to convince myself it was real), sharing it in a grand venue gave it an impact I was not ready for, and I found myself winded.

Over the course of her speech, Carly helped people see sides of her that many of us had taken for granted. Instead of being bitter or petulant, Carly exhibited the same sense of humour that often kept our family from careening off the rails.

A friend of ours who had known Carly since childhood approached me later that evening. “I will never look at your daughter the same way again” was all she could say before she drifted back into the crowd.

And neither would I. Carly was standing just outside the group on the dance floor, those who were laughing, clowning around and drinking. She stood apart but closer to the crowd than she had ever been, clearly content, even proud, maybe for the first time in her life. She smiled as friends grabbed her arms and danced her around in circles.

I observed the scene, briefly removed from the festivities and reflecting on a comment Carly once made about her ill-functioning mouth and her wish that we could “fix her brain.” I watched my daughter that night — able to move people with her words — and I realized that not everything that is ‘broken’ needs to be fixed.

Carly’s Voice, a memoir written with her father, is out now.