How I Learned To Mountain Bike On The Rim Of The Grand Canyon. Sort Of

'Feet even. Square your shoulders. Look ahead. Float over roots and rocks. Breathe. I’m trying to do everything right, but it all feels wrong.' 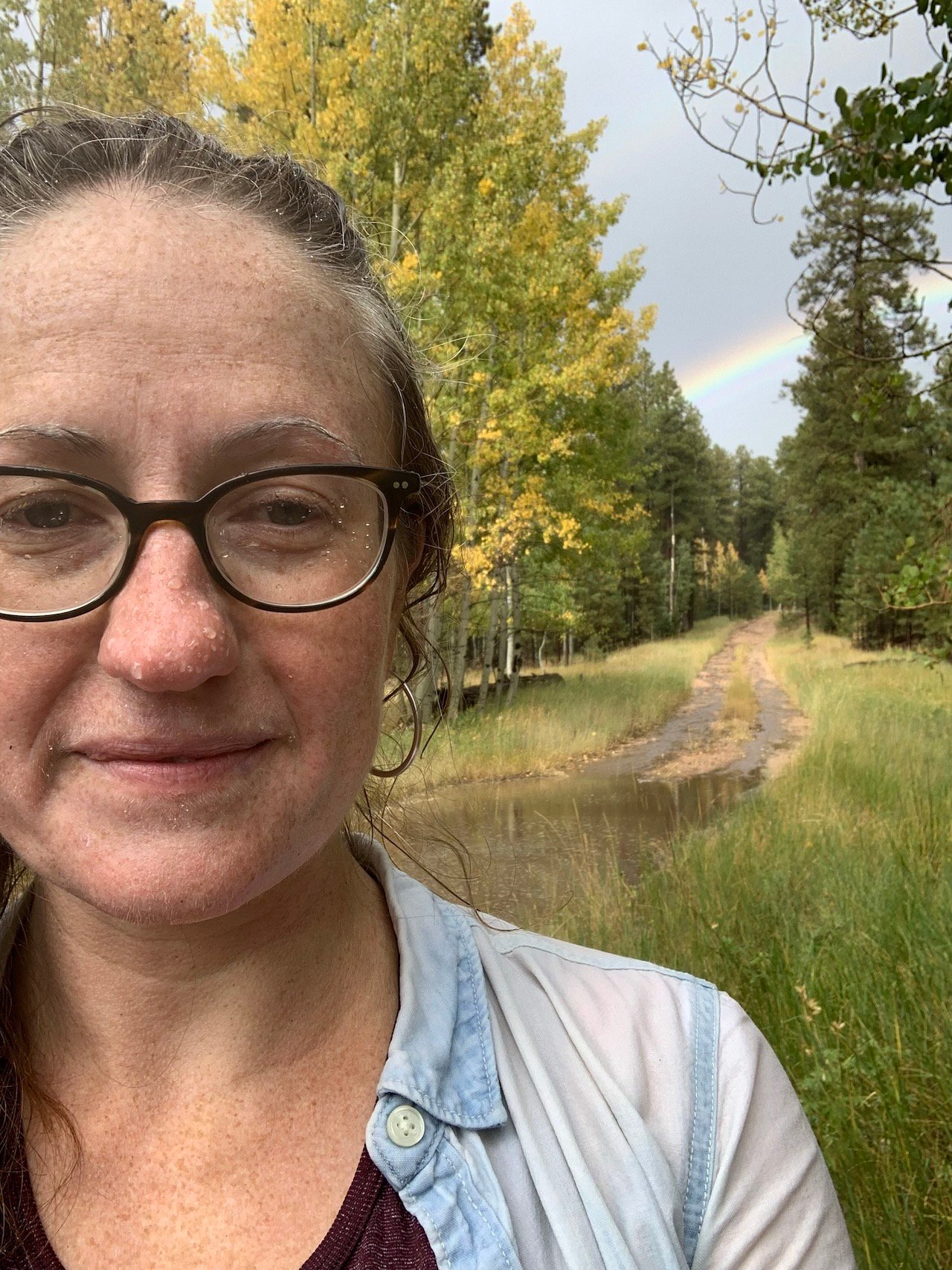 Arizona gets less than 10 inches of rainfall per year—all of it, apparently, on this day. Photo, courtesy Christina Palassio.

We are wet, like the wet that you get when you’re being blasted by a hose. Wring-your-underwear-out wet. I’ve got a death grip on my handlebars but my fingers are too cold and stiff to engage the brakes. And I can’t see through the rain streaming down my glasses.

We are seven sopping cyclists splashing down the Arizona Trail on a narrow that’s turned into a rushing river. Our destination: a campsite on the north rim of the Grand Canyon. Three of us—me included—have never been on a mountain bike before. Getting used to a new bike, new brakes, new shifters, and a new trail was going to be a challenge no matter what. Trying to acclimate in a thunderstorm while half-blind is terrifying.

And then, of course, it starts to hail.

Nowhere in the research I did for this trip to the desert did it say to prepare for a hailstorm. Arizona gets on average less than 10 inches of rainfall per year—all of it, apparently, today.

With hailstones pinging off our helmets and thunder cracking so loud my bones shake, we continue our slow, drowned rat parade and, after an hour, finally make it to the tour van, which has mercifully come to pick us up. I get off the bike, dump a half a cup of water out of each of my shoes, and squeeze my way into the van to warm my prune hands by the heat vents. Troy, our impossibly chill Idahoan guide, is saying he’s never biked through a storm that bad.

And then bubbly Bren, the only person in our group who’s survived the soaking with spirit more or less unscathed, calls out excitedly. We slosh out of the van just in time to see the storm stop as quickly as it started, and a triple rainbow appear at the end of the trail. Nature 1. Humans: 0. 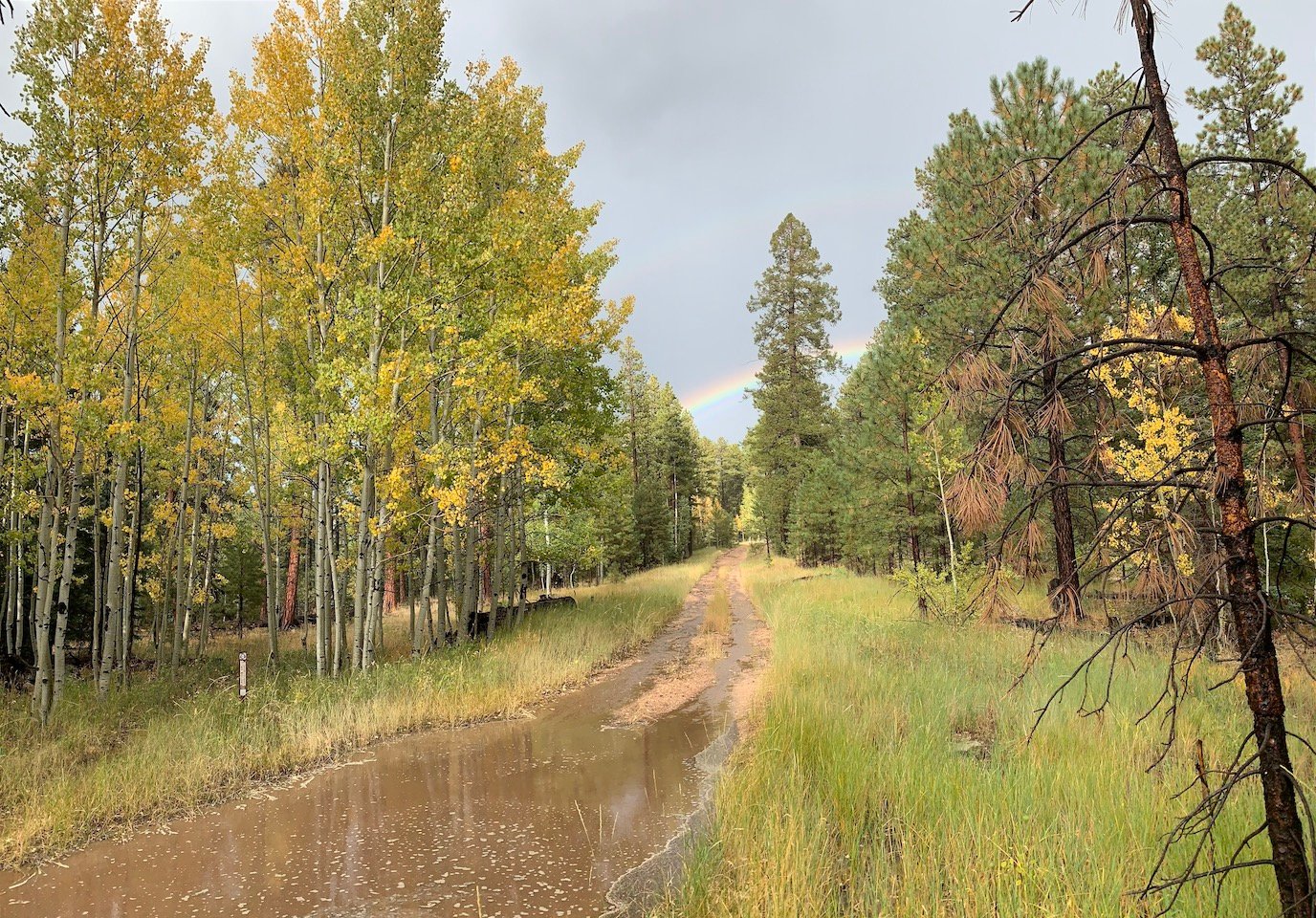 A strong bottom rainbow with two others faintly visible above it were the prize for a long haul in the rain. Photo, courtesy Christina Palassio.

I’ve been riding road bikes for 15 years. Those spandex skin suits most people wouldn’t be caught dead in? I love them. My sock tan? I’m working on it. Traffic? No sweat. I can slip between a garbage truck and the curb at 25 km/h without missing a pedal stroke. I’m not a natural athlete but road cycling comes easily to me. My bliss is going fast on a long, open road with a beer at the end of it.

Seven years ago, when I was 33, my father got sick, and riding went from being a fun hobby to a mental health necessity. The stress of being his primary caretaker and advocating for him through Quebec’s byzantine healthcare system was heavy. Without a partner or kids to distract or support me, the role started to define and consume me.

I needed something that could be mine—an escape, a source of strength, something I could talk about at parties. Cycling was it. On a bike, I was free: no care teams to manage, no bureaucratic roadblocks, no hospital gowns, gloves, and masks to get tangled up in. On a bike, I was outside, in a world that required nothing from me but admiration, pushing hard and fast towards a destination, strong and in control.

Over the past seven years, I’ve pedalled away anger, frustration, fear, and sadness. Even when it’s hard, or the conditions suck, or I’m exhausted, cycling always makes my day. So when I got the opportunity to go on a weekend mountain biking getaway to the Grand Canyon last fall, I jumped. It was perfect timing: I was feeling beaten down by love, work, and family responsibilities, and I wanted to feel strong again. I’d been on a mountain bike exactly zero times in my life, but the Rainbow Rim Trail—63 kilometres along the north rim of the Grand Canyon—seemed like an awesome place to learn.

“The Rainbow Rim Trail is closed.” We’re not even dry when Troy breaks the news. He got the news the way you get the news when there’s no cell service: from the clerk at the North Rim Country Store. Apparently, the massive Ikes Fire that’s been burning its way through the park and nearby Kaibab National Forest has grown big enough to force the closure of many trails, including the Rainbow Rim.

Closed?! It takes me a while to absorb the news. Surely we’ll go anyway. I mean, I came here to disconnect and prove something to myself, and the plan was to do it on the rim of the freaking Grand Canyon! The trail can’t be closed.

But it is. And Plan B, which involves riding a bunch of nearby trails I’ve never heard of, sounds decidedly less promising. Still, like a good cyclist, I decide to shut up and go along for the ride.

My cousin-in-law, Kris, teaches girls to mountain bike in Squamish, B.C., so I’d asked her for advice before my departure. “Just keep your feet even, look where you want to go, and breathe,” she texted back. “Easy enough!” I replied.

On the trip, Mark, a competitive mountain biker and trail-builder from Vancouver Island makes things seem a little more complicated. “Square your shoulders and take the downhills like a linebacker. Push your heels down for balance. Don’t forget to use your drop seat,” he says as we get our bikes ready. As he demos different stances and moves, I realize I’ve seriously underestimated the level of technical skill, spatial awareness, and physical aptitude mountain biking requires. 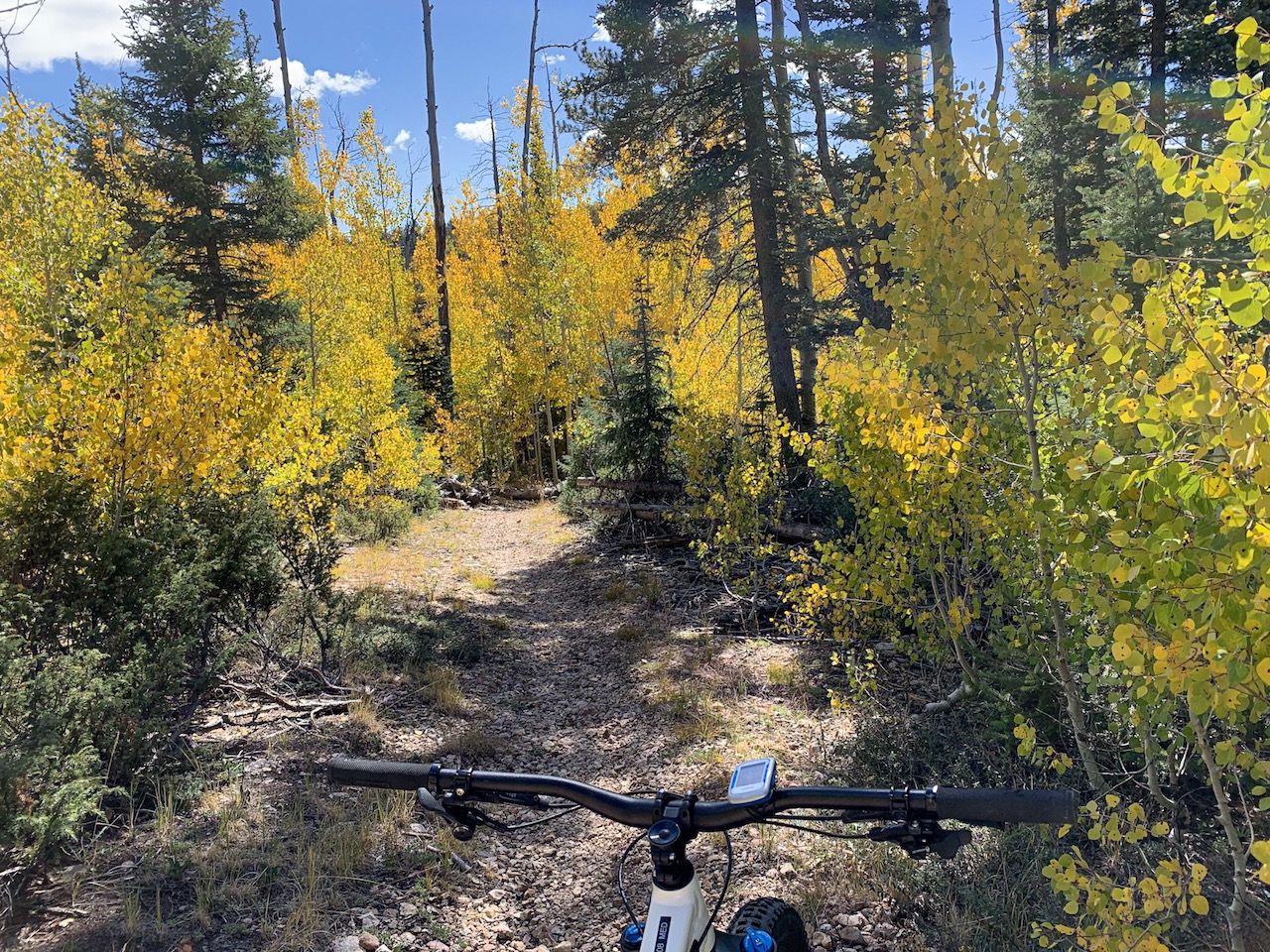 But it’s ok! It’s a new day, and I’m ready to put everyone’s advice to the test. I’ve had the best breakfast of my life: eggs, grits, chorizo, and coffee overlooking the Grand Canyon. The sun is out, and most of the trail has dried overnight, so we won’t be biking through a foot of water. Things are looking up.

As we climb and descend through Ponderosa pines and blazing yellow aspen, I run through my checklist: Feet even. Square your shoulders. Look ahead. Float over roots and rocks. Breathe. I’m trying to do everything right, but it all feels wrong. Every time a small hill appears, or a medium rock, or a gust of wind, or a gnarly root—gnarly bad, not gnarly good—I panic, hit the brakes, and it’s over. I can’t move forward.

“One wrong move,” my brain is telling me, “and you’ll end up a heap of broken bones at the bottom of the canyon.” The fact that we’re nowhere near the edge of the Canyon means nothing—in my head, disaster is just around the bend.

In the city, getting caught between streetcar tracks and an iPhone-wielding Uber driver causes no discernible rise in my blood pressure. I believe I’m in control, so I am in control. On this trail, every loose rock inspires frustration and a fear that’s totally out of measure with the situation. I feel embarrassed at being so easily shaken. It’s like I’m nine again, trying and failing to keep up with the other kids on the soccer field, wishing I was older and stronger.

Soon, I’m so far behind there are no other humans in sight. I’m spending most of my time escorting my $4,000 Specialized Stumpjumper, which is built to roll over just about anything, down hills that wouldn’t faze a toddler. My checklist now has just one item on it: Don’t cry.

I finally make it to our lunch spot more than an hour after the others, feeling embarrassed and ready to call it a day. I walk up just in time to hear everyone excitedly talking about our next stop: the site of Red Bull Rampage, where the jumps measure up to 23 metres. The annual competition has been called “the wildest extreme sports event on earth.” Those broken bones are looking more and more like a possibility.

I settle into the backseat of the van, close my eyes, and wish hard for a hailstorm. 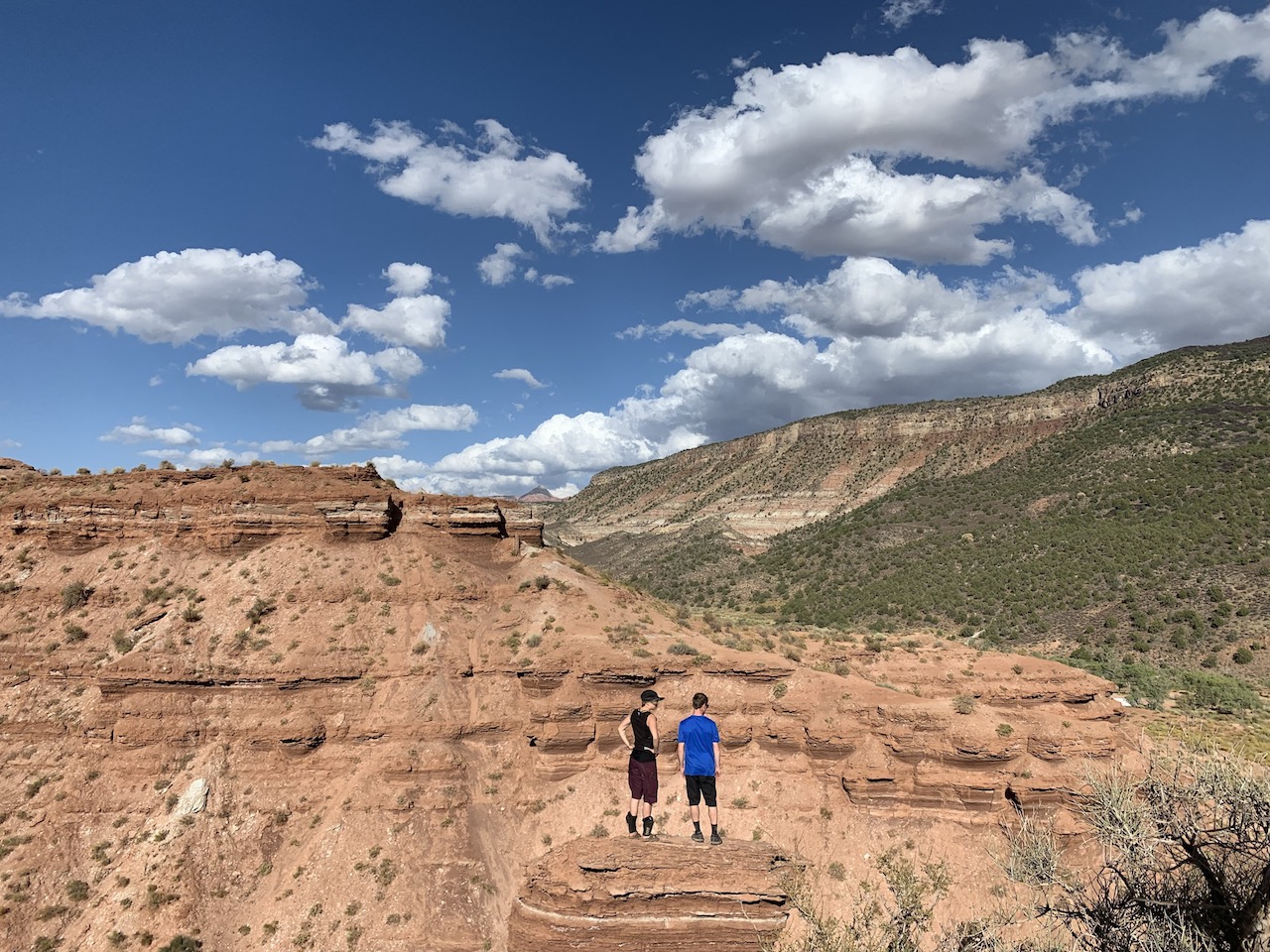 At the site of Red Bull Rampage, the jumps measure up to 23 metres. Photo, courtesy Christina Palassio.

A few hours later we pull into a nondescript spot surrounded by towering red cliffs on three sides. I don’t see anything that looks like a trail or a jump, but everyone piles out of the van, so I follow. We start walking around, but as hard as I look, it’s still unclear to me where the biking happens.

Mark is excited. He’s been here before—in fact, he broke his femur here in 2013. He starts walking around the site, pointing out faded lines that run down some of the steepest drops—tracks left by two tires careening almost vertically down a cliff face. The angles make my heart clench. It’s impossible for me to imagine anyone being able to guide a bike down those rocks.

With 80 km/h desert winds knocking us around, Mark decides to try a small jump. He sets it up while the rest of us point our phones at him. While he’s in mid-air, a gust of wind picks up and blows him straight sideways, wiping out any control he had. He manages to land, shaken but all right, and we decide to quit until the wind dies down. I try not to look too relieved.

Instead of riding, we climb the cliffs, and Mark talks us through some of the lines: why riders chose to build them that way, what makes them gnarly—good gnarly, not bad gnarly. I’d rather be half-drowned in monsoon rain than try any of them but, as Mark talks, I can imagine how amazing it must feel to let go and fly—to push everything else out of your head, look where you want to go, and breathe. 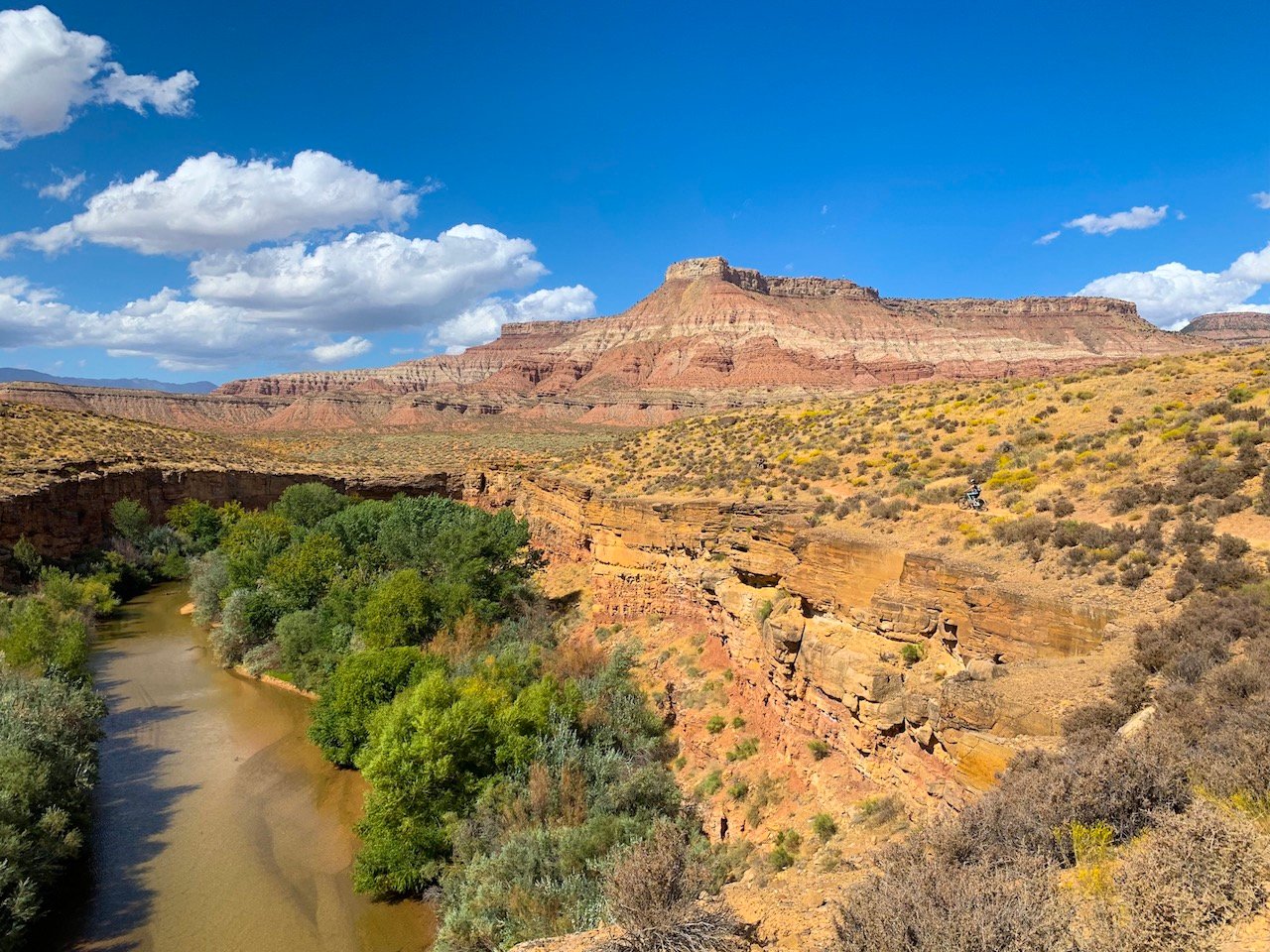 On the Jem Trail, a flowy 11-km downhill that cuts through the vast ochre desert, I start to get better at bike handling, at knowing when to brake and when to relax and let the trail take me for a ride. I finally pick up some speed and stop worrying about what comes next. It’s exhilarating, a total trip. I still dismount on the steepest descents, apologizing loudly into the empty air, but it’s possible to believe that might change with a bit more practice.

Somewhere along the way these past few years—or maybe decades—I stopped giving myself permission to have fun. I was so focused on proving my value as a human being that my human need to play was completely overshadowed.

I wonder if I’ve ever truly allowed myself to believe that there’s value in pure, innocent fun. Knowing how to play is not a quality we value in adults, women especially.

I think about that shy and awkward nine-year-old and what she likely knew but didn’t trust. About that striving and stressed-out 33-year-old and what she had forgotten. And what this almost-40-year-old who’s presently bouncing around in the desert in a ratty tank top on a bike she’s nicknamed Mike now knows: Sometimes all you need to do is play.