For Me, Mother’s Day Is Complicated

Growing up, my mother and I fought constantly, and the older I got, the further we drifted. I always thought we had time to still fix things. 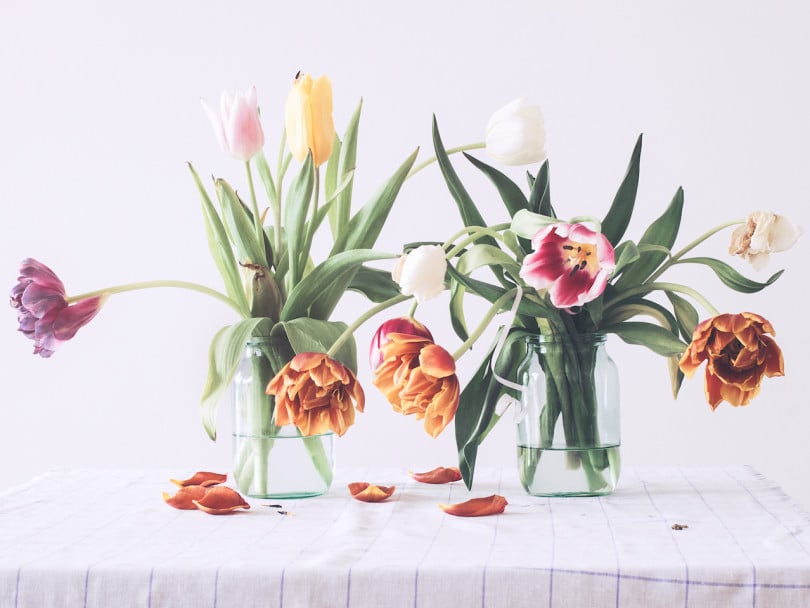 I hate Mother’s Day. It’s not just because my mom is dead, incinerated into chalky grey pellets around the time I should have been showing up at her door with a pastel-coloured bouquet, celebrating her for giving me life. In many ways, I’ve always hated it. My relationship to my mom was complicated, which made Mother’s Day even harder when she was alive.

We fought constantly. She was mercurial, often deeply depressed and I always found her behaviour difficult. The older I got, the further we drifted and it became hard for me to even sit in the same room as her. In the back of my mind though, it always felt like I had more time. Time to fix things, repair our relationship and work through our issues.

“Where are you?” I can remember my Dad asking me, his voice uncharacteristically shaky. I had to plug the opposite ear to block out the buzz of city traffic just to hear him.

“Heading to work,” I said pointedly. I didn’t have time for a lecture on how I needed to prioritize talking to my mom. I was late for work.

“Well. It’s your mother,” he started. Of course, I had thought, annoyed. She put him up to this. The ultimate guilt trip. She loved this tactic. I walked a little faster.

“She’s passed away, honey.” Simple as that. 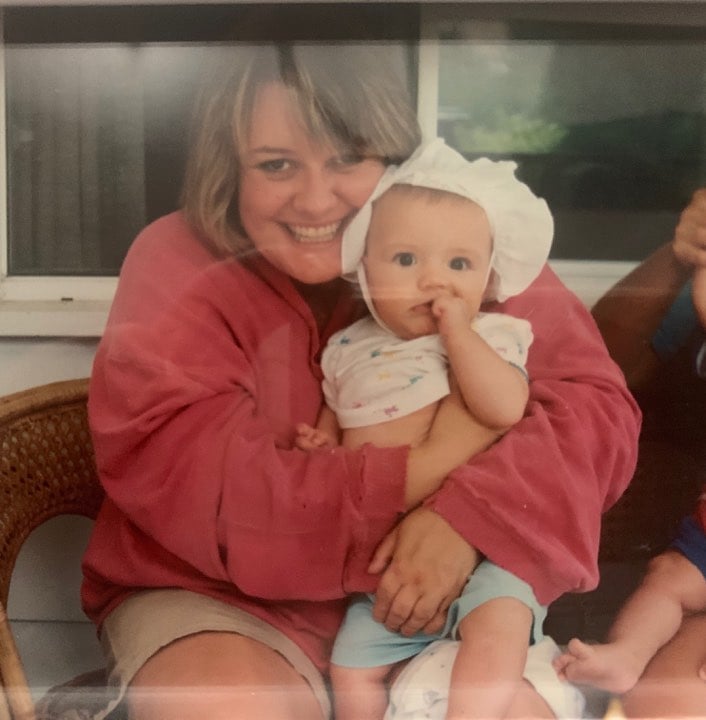 The writer as an infant sitting with her mother. (Photo, courtesy Raquel Farrington)

For years, our relationship was contentious, and as soon as I graduated from university, I moved out for good. I felt free, starting a new life, away from the chaos. Frivolities like Mother’s Day were reduced to a card, when I remembered to mail one, or a text, whenever I felt like hitting send. But a few weeks before she died I had begun having this strange, nagging urge to run full tilt into my mom’s arms, a feeling I’d worked so hard to quell for much of my life. I’d wanted to do Mother’s Day right, to take her out to celebrate, for the first time in my adult life.

My mom suffered from bipolar disorder that mostly manifested itself in intense lows, the depression hanging dark and heavy around her almost constantly, leaving her immobile and hazy. My dad, a kind but slightly distant man, was present but largely quiet during these times. There was never a candid discussion about why we hadn’t seen our mom for weeks or why she was unable to work anymore or why she sometimes got so enraged, scaring us so badly we’d have to call him at work, begging him to get home quick before she drove her car off the road, like she’d often threaten.

Growing up, my siblings and I largely had to fend for ourselves. My dad tried his best but he worked in Toronto, an hour and a half drive from the small town we grew up in and oftentimes when he got home he was too tired to insert himself into the chaos. The football game illuminated his face most nights. I guess his coping mechanism was to check out, and mine was to disappear.

When things were good, they were great. My mom had a lot of light; she was funny, super friendly and charming. People often gushed about how much they loved her—bank tellers, teachers, my friends. No one knew about her darker side, and it made me jealous. I felt cheated that I had to deal with all the darkness—I wanted the happy, fun-loving version of my mom, all the time. 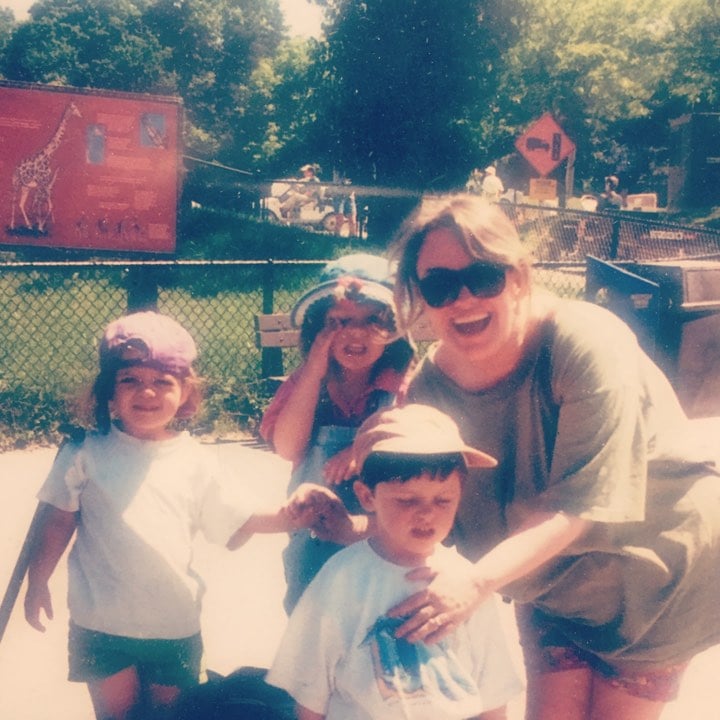 The writer and her siblings visit the zoo with their mother. (Photo, courtesy Raquel Farrington)

As a kid, her behaviour felt lazy. I didn’t know about her diagnosis and I felt resentful that it was my job to manage an entire household when all I wanted was to read Babysitter’s Club novels, hang out with my friends and have my mom stay awake long enough to help me with homework. Mother’s Day had a way of making me feel even worse about the bond I didn’t have with my mom. Marketing told me that it was the one chance a year I had to celebrate all the work she did for me and my family. But I couldn’t relate. What were we celebrating? The towering pile of dishes washed by my siblings and I? Cereal dinners huddled around the TV while she slept soundly at 5 p.m on a Tuesday?

The older I got, the more ubiquitous social media became and I consciously tried to avoid the painful scroll through my accounts. It hurt, when I did inevitably scroll through Instagram, watching the endless stream of filtered photos of love, friendship and mimosas. “Happy Mother’s Day XOXO” I’d text, guiltily, wishing it could be us streaming live at a chic restaurant.

After she died, I went back to the town I grew up. I hadn’t told my mom how I’d been feeling in the weeks leading up to her untimely death, so she had no idea I had been yearning to see her. Picking through her belongings was the closest—and yet furthest—I’d been to her in years.

I came across evidence of the enigmatic, eccentric, hilarious woman she had always been—boxes of funky jewellery scattered everywhere, vintage Polaroids of her topless on the beach in Goa, letters from friends riddled with inside jokes. There was also evidence that explained her behaviour and somehow justified my radio silence over the past few years. I found empty wine bottles stashed in the corner of my sister’s bedroom closet, despite her claims she’d been sober for the past decade. I found plastic straws cut into quarters littering the floors and emails to random credit lenders, with approvals for sums ranging from $300-$800. Hacking onto her Facebook pages led me to cryptic messages to a drug dealer talking about getting more “stuff.”

I felt sick, faced with the truth of a drug and alcohol addiction I didn’t even know she had, the way her mental illness had spiralled while I was working to build a new life in the city without her. I carted my findings downstairs in a bag and presented them to my dad. He sighed, eventually replying, matter-of-factly,”she’s always had a death wish.” 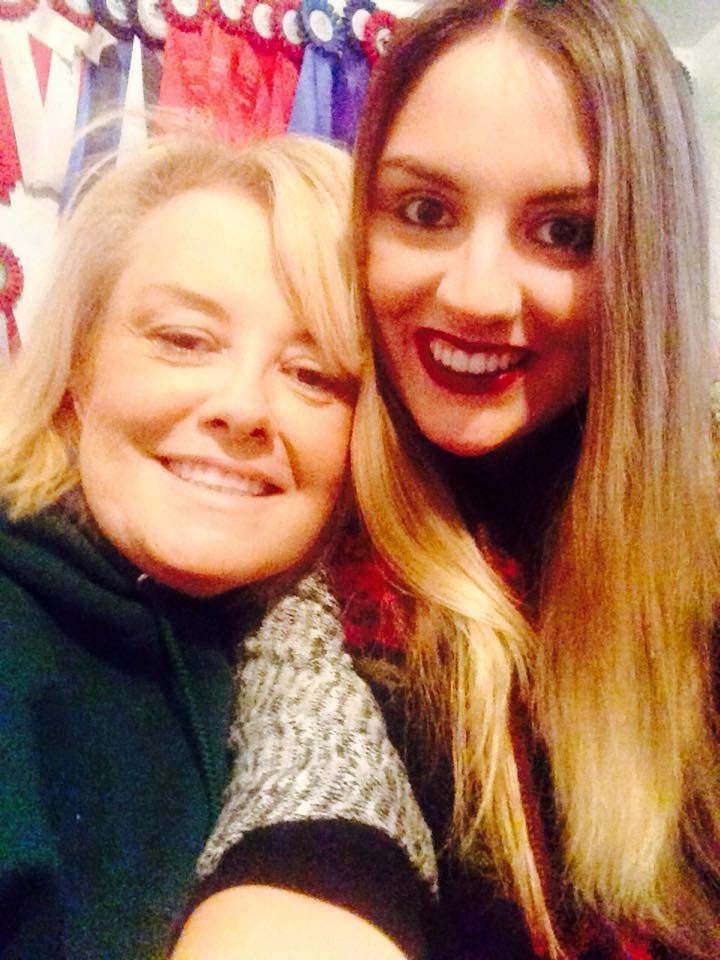 The writer (right) poses for a selfie with her mother. (Photo, courtesy Raquel Farrington)

Over the years my parents had become really good roommates but a horrible married couple. They barely spoke. They lived entirely separate lives, together. He had no idea what she’d been up to and yet, he wasn’t all that surprised when faced with the facts. It felt like all of us had failed her.

The discovery that made me cry though was a shoebox filled with mementos I found underneath her bed. In the box were various keepsakes, one being a Mother’s Day macaroni craft, circa 2000, from yours truly. She had taken the craft in her hands, stared at it for what felt like forever before she started sobbing right there in the kitchen. In my little-kid brain I thought that meant she hated it. Even at seven years old, it had become clear it was my responsibility to manage her moods, and I was beginning to realize I wasn’t cut out for the job.

“My teacher told me it would make you happy,” I had said dejectedly. She wiped her face and held the craft to her chest.

I tossed the craft in the garbage with the empty wine and prescription bottles and straws.

Mother’s Day means different things to different people. I am still consumed with her absence, the betrayal I feel and the realization that we will never have the chance at a redo. I’m also relieved I don’t have to force anything or sit around all day feeling rejected because she failed to show up.

One thing is for certain, I miss my mom, every day. Mother’s Day was and still is, just another one of those days.

Raquel Farrington is a writer based in Toronto.