Men have biological clocks too! One guy tells his story

It's not just us girls who have a biological clock. Adam Segal fesses up to what's really on the mind of one single guy. 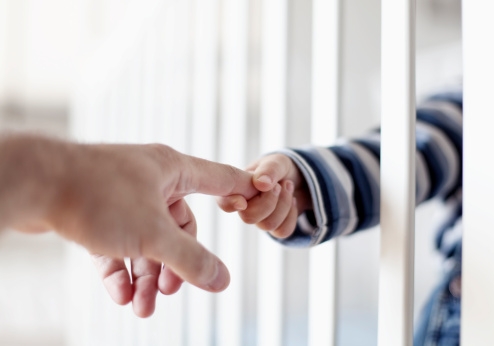 In the ’80s, my family vacationed on the shores of Lake Okanagan in British Columbia. It was a time defined by water-skiing, mini-putt and barbecues. As I grew older, I envisioned returning with my own children to this timeless, sepia-infused place of first bee stings, occasional fist fights, Timbits pit stops and the joy of catching minnows at sunset.

Single and 34, I have since lived a childless urban existence in Toronto. Having little rug rats running around rarely entered my mind, even when my best friends — the boys I once played Nerf football with — started settling down and having kids of their own. But everywhere I turn these days, I hear baby talk.

In the past six months alone four friends have had their first babies; two more are expecting, and the childless couples I spend Friday nights with are tracking to pop out kids in unison. Never one to cater to convention, I was suddenly cognizant of life without children. Was my own biological clock ticking? Is there even such a thing?

Turns out there is. The male biological clock is not some New Age psychobabble. Physically, men go through similar issues to women regarding fertility, only slower. (The male equivalent to menopause is andropause, a gradual decrease in hormone levels.) The Colorado Center for Reproductive Medicine found that when male mice, aged 40 in human years, mated with young females, only half resulted in pregnancy. According to a Columbia University study, male testosterone decreases 1 percent per year after age 30, and, as if that weren’t enough, findings by Icelandic scientists link higher rates of autism and schizophrenia to children born to older fathers with aging sperm. Men, it seems, are as vulnerable as women when it comes to infertility.

It makes sense. Not only was I already worrying about having kids before hitting the big 4-0, but now it seems there is some serious science to back up my pressing urge to procreate before it’s too late.

I realized things had changed when I found myself wanting to wake up early on Sunday mornings and spend time with little people rather than staying late at the bar on a Saturday night. I started making out-of-character decisions, including taking my vacation to coincide with my best friend Josh’s three-year-old’s birthday, rather than joining a guys’ golf getaway.

After years as a bachelor, I was suddenly envying the lifestyle of the Snugli-toting dads in my ‘hood. This past summer, when we were standing over the barbecue, my neighbour remarked that I was “a natural” as I cradled his little daughter Sophie in my arms.

So now I have two worries. First, there is my concern about the impending disintegration of my baby-making abilities. Second, it’s possible I could spend the next five years longing to enlist in the papa army, only to find myself out of step with those closest to me by the time I get there. When their kids are hitting puberty, I’ll be changing diapers. And my secret fantasy of spending long summer nights hanging out with our kids together will simply be a pipe dream.

But even in these more panicky moments I comfort myself with the thought of my own father. He hails from the baby boomer generation, who started families in their early 20s. But he had his first child — me — when he was an ancient 34 years old, the same age I am now.

I have come to realize that my once-casual dating priorities never included finding the future mother of my children. Now, it’s one of the most important things I look for in a partner.