What it feels like to live in the real Downton Abbey

The former chartered accountant turned eighth Countess of Carnarvon shares what it's like to live in a castle. 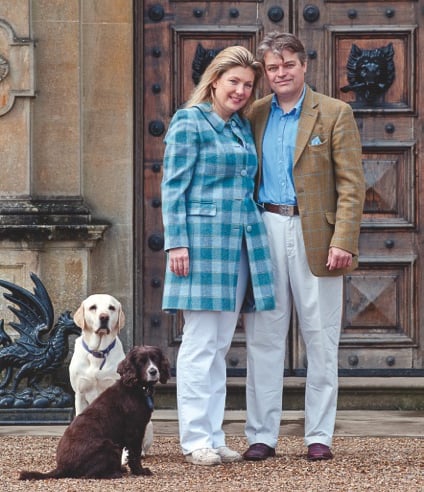 Lady Fiona Carnarvon married the current Earl of Carnarvon in 1999, and nine years ago they took over Highclere, the setting for the very addictive television show Downton Abbey. Her love of Highclere and its history have prompted two books: Lady Almina and the Real Downton Abbey and (more recently) Lady Catherine and the Real Downton Abbey. Here, the former chartered accountant explains what it’s like to live in a legacy. (When I called Lady Carnarvon, her assistant answered and then took several minutes to find her ladyship. “I was in the wrong study!,” laughed Lady Carnarvon, when she was finally located. “This is the problem with having so many studies.”)

I met my husband at a dinner in London. My father had died not long before and I was in a very thoughtful and reflective period of my life. When I first saw Highclere on a foggy January day I thought the trees and landscape were wonderful. I had just come out for a walk in the country, and I didn’t have a crystal ball to predict what would happen. When Georgie’s father, the seventh earl, died, we took on the mantle as the next earl and countess of Carnarvon. Everything has always been step by step, so it wasn’t like a big strategic task. First and foremost, I wanted to support my husband through the loss of his father, a man he adored hugely — and a man I had come to admire in a very short period of time. After that, it was working things out and following the lead and figuring out the day to day. We sat down together and came up with a vision for Highclere, and we started with the Egyptian exhibition in the cellars of the house.

In addition to Downton, we have a lot of other projects on the go. There are always building projects, and I’m always talking to electricians — from rebuilding the floor of the cricket pavilion to the tea room. Then there’s the farm, the cottages and the tenants. Then there’s the television show and the photo shoots and the weddings and the launches. Every day, it’s pretty jolly busy and you have to look both right in front of your nose and way off in the distance. It can be exhausting. But I didn’t want to preserve a museum; I wanted to preserve a home. And I think these great houses are about people, not the dusty old artifacts or the black and white words in books. I want to tell the stories of the people who made a home here, and not just the contextual facts.

I don’t know if I have a favourite room, but I love the library. And this morning, I was in the archive rooms, which I also love. And the muniments room are like a pot of gold. And I love the trees. And I love walking through the courtyard and bumping into people, whether it’s Anna, one of our housecleaners or a team that’s there to steam clean the kitchen. I think, overall, I like the broad challenges of running the place. On a daily basis, running Highclere is really about people; it’s about planning and communicating and making sure there’s a shared system of values. It’s not haunted, there’s just a few ghosts around. Sometimes I really feel them quite strongly and sort of leave them to it — but we all get along quite well.

We’re here the whole time they’re filming the TV show. There’s 90 people in the castle, 15 hours a day and so you can’t really get away. But it’s been an extraordinary ride. My husband loves Highclere, and it matters hugely to him. I love my husband and I want to support him. That’s the basic reason I’m committed to Highclere. As a wife, you try to find your role in the family life and figuring out what works for you as a person and in your marriage. For us, the home and workplace are one in the same, which comes with its challenges. My husband and I had breakfast together, and then lunch together, and I don’t think we’re having dinner together because I have to give a presentation. But it’s not like either of us goes off to work. One of the reasons people respond so well to Downton is because it captures a time where a workplace and a home collide, and it provides a romantic view of the past. For us, today, humanity and compassion and being part of a team are key to how the castle is run today. There’s a duty of service.

What it feels like to become the parent of your grandchild