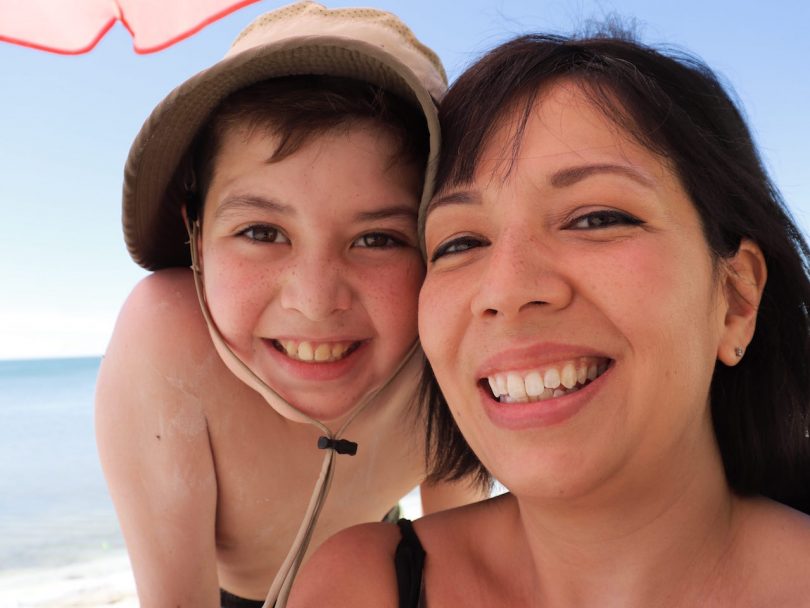 My entire adult life, I forced my body to stay the exact same size. My ideal was 120 pounds, and I clung to this magic number as if I had been flung into the sea and it were my life preserver.

Since shedding about 15 pounds of “puppy fat” at age 18 (I’m 42 now) and landing at this arbitrary number, I’ve oscillated between periods of gobbling burgers and fries with abandon and then severely restricting what I ate. I’d bid adieu to bread, pasta and rice—all the food that puts a giddy smile on my face—and would nibble on salads and meat-centric, Atkins-style meals. I was often painfully hungry (and crabby and overly obsessed with my next meal), but that hunger scratching at my insides was, I believed, worth it. After a few weeks of this self-punishment, I’d re-attain my goal weight and bounce right back to the potatoes and penne. Wash, rinse, repeat.

I only recently realized my on-again, off-again carb restriction was a dumpster-fire of a deal for my husband and son. Driving home from grocery shopping on an icy and grey morning, my husband, Niall, told me something that changed my eating habits forever. I was prattling on about some boring way I discovered to substitute delicious pasta for something stupid like zucchini. (My usual diet routine had stopped working, and seven pounds were stuck on me and I was getting desperate for something to work.) “You know, if you were to die,” he said, “I would definitely remember how caught up you were in your weight and with food.”

Dieting had turned me into a cranky food-obsessed bore who wouldn’t eat a pizza slice after Saturday ice skating with her family. Was this the legacy I want to leave in the world? Or the recollection that my 11-year-old son Cillian would have of me? “Great mom. Too bad she never ate any of the cakes she baked,” is not how I want to be remembered. Even worse, was I passing on my disordered relationship with food to my son? I had been careful never to speak openly about weight loss or food restriction—but still. None of it was looking like a smart life strategy.

I had escalated my war against these seven pounds (which is not very much, but my lens was very distorted by a lifetime of weight-gain-avoidance) by trying the ketogenic diet, a.k.a. eating more fat, more meat and even fewer carbs. If I was no fun on Atkins, it’s fair to say I levelled up to a straight-up monster on keto. I was always irritable, deploying my yelly voice on Cillian for smaller-than-usual infractions. With Niall, I’d drag him into my obsession, detailing everything I ate during the day. That’s why his quip in the car was like Thanos’s Snap in Avengers:Infinity War. However, instead of disappearing, I woke the f-ck up.

The next day, I started “intuitive eating.”

At its most stripped-down level, intuitive eating means that you reject all diets, eat when you’re hungry and eat whatever you want, letting your hunger and fullness cues guide you. It’s not a new idea, having been around in book form since 1995, the first year that Intuitive Eating was published by Evelyn Tribole and Elyse Resch. However, the principles are so practical and so anti-diet (and other than through counselling, it’s hard to make any money off of intuitive eating) that it’s yet to catch on with the fervour of Atkins and paleo diets.

In the days after my Thanos Car Snap awakening, I went into a fugue state of food ecstasy. I don’t know how to describe it, other than that feeling you get after quitting a toxic job or ending a bad relationship. Like, if I could have done some cartwheels without busting a knee, I would have. I hoovered up ice cream and chocolate like it was my job. I brought home four types of bread.

Breaking up with disordered eating and diet culture has not been without its struggles—it’s hard to dump 25 years of obsessing over my exact weight as if it were the fourth member of our family—but it’s been surprisingly amazing. For the first time, Niall, Cillian and I can eat the same foods now—not sometimes, but always. We rarely used to order pizza, because I wouldn’t eat those verboten white carbs. But we’ve since discovered an amazing mom-and-pop pizza shop near us. No more zoodles (zucchini noodles) for me. Pasta dinners are simple now. A box of Barilla pasta served with sauce! Just like the Italians meant it to be. Taking turns with my son pulling off hunks of baguette still warm from the bakery around the corner from my house and stuffing them into our mouths is one of life’s simple joys.

I no longer weigh myself anymore. And I’m brighter in spirit than ever.

As a parent and as a spouse, I’m more present because I’m not always thinking about food and I’m not always starving. My moods are more even. Before I raise my voice at Cillian for tracking dirt through the kitchen, I can actually pause and collect myself. Plus, he and I have discovered that one of our favourite ways to spend time together is to go out for lunch. When he says “Mom, can we grab fried chicken?” I can answer “Sure!” Instead of what I used to say, which was say “Um…ok, I’ll take you,” followed by a scan through all the menu offerings low-carb enough for my diet. Without the spectre of food macronutrient ratios haunting me at all times, I’m free, I’m happy and I can relish life—and I enjoy food to an extent I haven’t since my early teens.

Intuitive eating has taught me how to respect my hunger and fullness signals, so yes, I eat all the bread and white rice I want, but now I know when to stop. I don’t dream about them anymore. I eat them. Then I’m happy. I never need to binge, and I don’t obsess about my next meal because I never let my “gas tank” run low, something I was notorious for doing in my dieting days.

I wish I could tell you this was my happy ending, and intuitive eating changed how I felt about my body forever. It has changed what I eat, but it hasn’t budged my body confidence. I still struggle with wanting to stay the same size juxtaposed against my desire and resolve to eat what I want. I changed my eating habits, but not how I feel about my thighs.

Eight months into this, I don’t seem to have gained weight nor lost those few pounds above my ridiculous “ideal.” It’s possible I never needed to diet at all, and this is my body’s natural size anyway. So many years of hunger pangs in exchange for no perceptible difference in my body fills me with something approaching rage. And yet, I don’t know what I will do if I gain a lot of weight.

I know for sure that I enjoy intuitive eating. When I eat carbs alongside my family, I’m no doubt a better (and a hell of a lot happier) mom and spouse. I’m still working toward accepting myself no matter what weight I am. I’m not there yet—not even close, but this new outlook of life, this new joy in eating, this new lightness in being is definitely the best first step.