Going back to school in my 50s was tough, but not as hard as being an intern at a stage in life when most people are fantasizing about retirement. 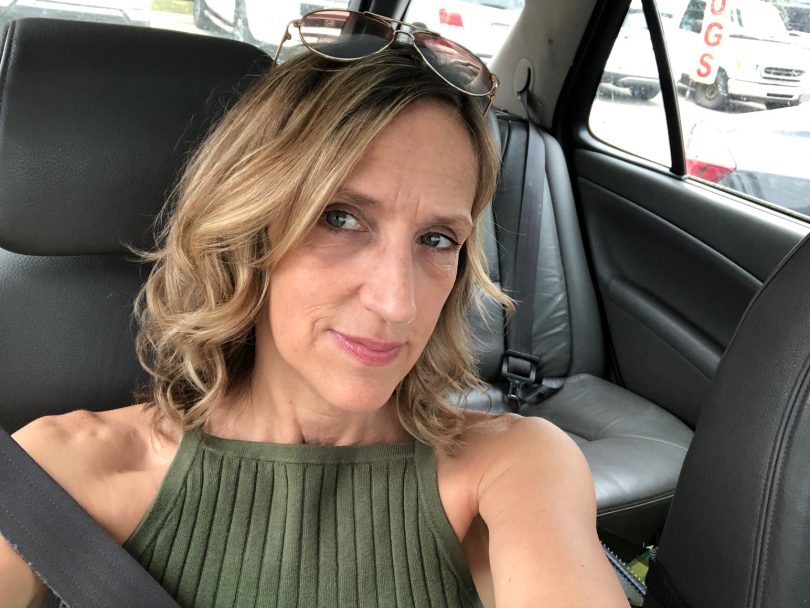 Chris Deacon heading out on day one of her internship.

I’m locked in a stairwell. I’m 53 years old, it’s only day one of my internship, and I’m already screwing up. My pass card won’t work on the floors above and below me—all I can do is wait. At least I’m not alone. My fellow intern Laura,* who is 23 and appears to have no pores, is trapped with me. I take in her effortless outfit and start to second-guess my wardrobe choice of “palazzo” pants that suddenly seem impossibly wide, but that the H&M sales clerk assured me scream “office casual.” After 15 minutes, I start to panic: what if we aren’t discovered till morning? We’re interns. It could be days—maybe months—before anyone even notices we’re gone.

“You’re getting a bit long in the tooth to be an intern,” my 89-year-old father had matter-of-factly told me a few weeks earlier—like I needed the reminder. At the time, enrolling in a writing program and workplace internship had seemed like a good complement to my increasingly unpredictable career as a television director. And while being the oldest in a class of millennials hadn’t been easy, the prospect of being out of school and in the real world learning the ropes with people half—no, make that a fraction—of my age had sent me into a tailspin. I was too old for this! I had kids! And a dog! Hell, I’d directed Drake before he was even Drake!

But it was too late to turn back. I’d already alerted my supervisor of my “mature student” status to avoid embarrassing either of us on the first day. Now, I had three months to make an impression.

Being new is hard.

Standing around a snack table post-stairwell rescue to celebrate a co-worker’s birthday, I feel invisible. My colleagues are smart and funny and I envy their easy rapport. I do a mental scroll of my favourite conversation starters: explosive teenagers, professional envy, debt, fear of failure, fear of death—but none seem quite right. I glance over at Laura, who looks perfectly content to simply stand there and be 23. Any awkwardness she’s feeling will be laughed off later with her housemates over beers. I, on the other hand, will spend the next 24 hours ruminating on my inability to forge deep and lasting connections with perfect strangers on my first day.

Over the next few weeks, I try to project both eager enthusiasm and a Zen-like calm—like I’m totally okay with not knowing what I’m doing. Like the ever-present feeling of being underfoot is just what the doctor ordered at this point in my life. But the truth is I overthink everything. Should I be the first to stand for our daily 9:30 meeting when it’s 9:28, even though no one else is standing? Should I join in on that conversation in the kitchen? Should I speak freely at meetings or pick my moments? It feels strange to be questioning my every move at this stage. After all, I’ve lived, I’ve raised kids, I’ve gone through stuff. At one point I consider trying to be the “maternal” intern, the one people come to for a shot of wisdom—but then I think about my hyper-competent boss, a woman who appears to be killing it on all fronts—and really can’t imagine a single question she might have for me, only the million I have for her.


I’m here to learn—and my ego is having a hard time with that. No matter how much I try to embrace “beginner’s mind,” I can’t stop obsessing about the fact that I graduated from high school around the time most of the staff was born. The self-talk is relentless: What am I doing here? Isn’t this supposed to be the decade where I enjoy the fruits of my labour? How come I’m not travelling and renovating and reflecting? At 53, you’re supposed to be someone’s boss, not someone’s intern.

At the same time, I feel the clock ticking on my placement. Going to school has already meant a year of unemployment and I’m determined to show these people what I can do. At the next meeting, I pitch an idea. My boss declines it. “But thanks!” she says sincerely. “Of course!” I sputter while praying for the earth to swallow me whole.

I enter dark-night-of-the-soul territory when I try to learn the company’s publishing software system that involves working with code—a skill I never dreamed I’d need in this lifetime. By day three, Laura’s doing it in her sleep, but no matter how many times I study the instructions I continue to mess up. I stop counting the times I walk over to Laura’s desk and patiently wait for her to remove her ear buds while I fix her with a silently pleading expression that might be cute if I was a dog. “It’s okay!—It’s complicated!” she lies. “Beginner’s mind,” I chant inwardly as she follows me back to my desk and fixes my problem in two strokes.

Riding the elevator down at the end of each day leaves me drenched in self-loathing: how is it that I can direct a 40-person crew and coach my daughter through a panic attack, yet fail to grasp this most rudimentary of skills? I’m growing weary of pretending I’m okay with not knowing anything. I’m also starting to wonder if I’m more trouble than I’m worth to these people. What if I get fired?—can you get fired if you aren’t getting paid? I’m afraid to find out.

But around six weeks in, something shifts. I finally have my first non-work related conversation and it gives me the chance to show my true self. In meetings, I learn the dance of putting forth ideas and holding back. I master (sort of) the company software. I still engage in relentless self-talk but I’m better at silencing the voices. That exec who walked by and didn’t meet my gaze? She isn’t mad at me—she’s not even thinking about me. The tough but smart notes I just got from someone 18 years younger? So what? Aren’t we always learning from each other? I’m even kind of rocking office casual: Sashaying down the hall in my palazzo pants on a good day in the right light, I could swear I’m in a Nancy Meyers film.

I’m feeling so good that I impulsively fire off a spec opinion piece to my boss and then instantly regret it. Why was I so hasty? Was it even any good? Who says she even wants my opinion? During the next day’s meeting, I can hardly look at her. What was I thinking? I was an intern! I rehearse what I’ll say when she rejects it.

That’s when the voices in my head get pissed: they tell me I’ve been so afraid of running out of time—in my internship, in the industry, in my life—that I haven’t given myself any room to fail. I’m 53 years old, and I still have so much to learn. Then I realize something else: the only person who cares that I’m a 53-year-old intern is me. For the remainder of the placement I finally get out of my own way and embrace beginner’s mind for real….which is when I notice that my boss has replied to my email. She loves my opinion piece and she wants to run it.

Chris Deacon is a Toronto writer, screenwriter and television director.
*Name has been changed.