How tragedy turned this Toronto urbanite into a Virginia farm girl

After Sarah Bradford's son died and her marriage fell apart, she was in a desperate need of a diversion — a fishing lodge in Montana. That's when she met the love of her life 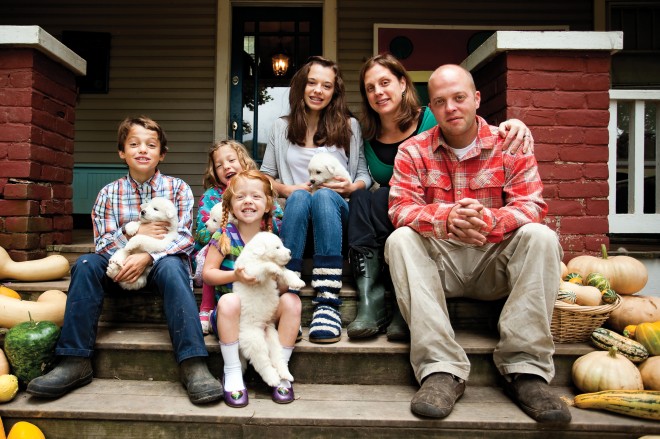 Eleven years ago, two terrible things happened to Sarah Bradford: Her one-year-old son, Bennett, was diagnosed with a rare brain tumour and died four months later. Then, her already fragile marriage collapsed. Although Sarah was pregnant with their third child, she and her husband of 10 years divorced shortly after Bennett’s death.

To recover, Sarah, who worked as a family doctor in a Toronto-area hospital, retreated to a friend’s quiet cottage with her four-year-old daughter, Sophie. Surrounded by rocks and pines, they painted pictures, played by the water and tried not to think too much about anything. “I couldn’t work while Bennett was sick, or for several months after he died,” Sarah says. “I just couldn’t bear the thought of dealing with another child’s emergency.” But when she finally did return to her practice, it was Sarah’s patients who gave her purpose. Many of them wrote letters of support and understanding. “It was the worst time in my life, but people’s kindness reminded me that even though bad things happen, life is good.”

Still, the next two years was a struggle. As the second anniversary of Bennett’s death approached — and what would have been her eleventh wedding anniversary — Sarah found herself in desperate need of a diversion.Where some women might have soothed themselves with a spa getaway, Sarah (who once travelled to South Africa to run a marathon on a whim) did something she’d always wanted to do instead: Go fly-fishing. Leaving Sophie and 18-month-old Aidan in the care of her parents, Sarah fled to a fishing lodge in Montana with images of Brad Pitt in A River Runs Through It playing in her head. “You have your hopes,” she says with a laugh.

At first, her guide wasn’t thrilled that he’d landed a girl in his group. There was plenty of eye rolling, and she was informed that no one believed she could fish. But Sarah learned fast, and when she reeled in a respectable number of trout, it was as good as knowing the secret handshake. She waded out of the river and was immediately invited to join the guys at the lodge for a beer. Afterwards, she slipped into a bright orange bikini for some post-fishing bridge jumping (at five foot 11, “self-conscious” has never been in her lexicon). The matronly housekeeper was overheard to remark, “Well, you don’t see a lot of that around here!”

As the only eligible female to visit the lodge in nearly a decade, Sarah discovered the odds of meeting someone were skewed in her favour — and handsome, soft-spoken Alec Bradford quickly caught her eye. He’d just quit his job as an editor in New York to travel across America, writing about fly-fishing. It was their shared habit of navigating life by their gut feelings that drew them together. “We have this belief that if you really want something, you should try to make it happen,” Sarah says. “If I decided I wanted to become an astronaut and go to the moon, I really think I could actually do that.”

A heady four-day romance led to several months of lengthy long-distance phone calls until one day, Alec simply appeared on her doorstep with all of his gear. (Sarah later created a “Why I love Alec” book and included one of her phone bills with the $1,000 total highlighted in red.) The day after he arrived, Alec took Sophie and Aidan to fly kites on the shores of Lake Ontario, and five months after that first meeting in Montana, they all travelled to Tennessee to meet his parents. While they were fly-fishing on the river where he grew up, Alec suddenly went down on one knee in the water. Worried he’d fallen, Sarah rushed over, and, with Sophie cheering from the bank, Alec proposed. “They’d picked the ring out together, and it was so sweet, I had to say yes,” Sarah says.

On the drive back to Canada, Alec told her, “You should think about moving down here, because it’s really cold in Toronto. We could start a farm.” At the time, Sarah’s life was decidedly urban. She lived downtown, biked to the hospital, met friends for coffee and tended to the tiny Post-it Note of green space that was her backyard. But she’d always fantasized about living on a farm. Eight months later, Sarah found an opening in a clinic in Christiansburg, Virginia, where she could continue delivering babies, a job she loves. Then the couple bought a farm nearby.

But Leaping Waters is not your typical hobby farm with a token pig and handful of chickens pecking in the yard. The Bradfords’ litany of livestock includes 200 Ancient White Park cattle, 500 geese, 200 hogs, 500 turkeys, 15 barn cats, seven horses, six Great Pyrenees (these large white dogs sleep with the livestock and protect them from predators), 30 chickens, two hamsters and one bearded-dragon lizard.

The couple faced a vertiginous learning curve. Alec had worked on his grandfather’s farm as a kid, and Sarah once owned a horse, but that was the extent of their animal husbandry experience. At their first pig birthing, they had to coax a reluctant piglet to nurse by rubbing its snout on the sow’s belly. “Like lactation consultants,” Sarah laughs. This year, a bobcat killed 100 turkeys — a $10,000 loss. And then there was the time one of their cows abandoned her new twin calves. The calves stopped moving, and the couple raced them inside, wrapped them in a silk blanket from Pottery Barn (a remnant of Sarah’s old life) and warmed them with hair dryers. Soon the calves were racing around the room.

“We didn’t mean to farm this big,” Sarah says. “But everyone who comes here gets excited about what we’re doing, and suddenly the demand was there.” Leaping Waters now supplies 15 high-end restaurants in the U.S. and was featured on celebrated chef Eric Ripert’s show, Avec Eric. He uses their tenderloins exclusively for his steak tartare at four-star Le Bernardin in New York City. “You fall in love with the idea of things,” Sarah says. “And when you taste good food and realize where it comes from, it changes it for you.” She is especially proud of her one-and-a-half acre garden, where she recently devised and innovative way to trellis her 500 tomato plants using wire stakes and Velcro restraints the nurses at the hospital save for her. “I’m exhilarated by this life — it’s never dull or boring.”

Best of all, her children are happy. Sophie and Aidan now have two younger sisters, Sadie and Tallulah. Between getting them all to school, delivering babies at the local hospital and conducting late-night bottle feedings for orphaned calves, Sarah’s days are long and full. She manages to squeeze in a monthly massage and runs the stairs at work in lieu of a gym membership. And, every now and then, she devotes half an hour to sitting on her porch and watching the farm in action. “It feels so right to be here,” Sarah says. “I really believe people have the power to make their dreams come true. We don’t have control over everything that happens in life, but we do have a choice in how we react and carry on.”