How one mother carried on her daughter's stylish legacy

Alli Shapiro was diagnosed with cancer at 19. When her treatment made her gain weight, she dreamt up a fashion line for full figures 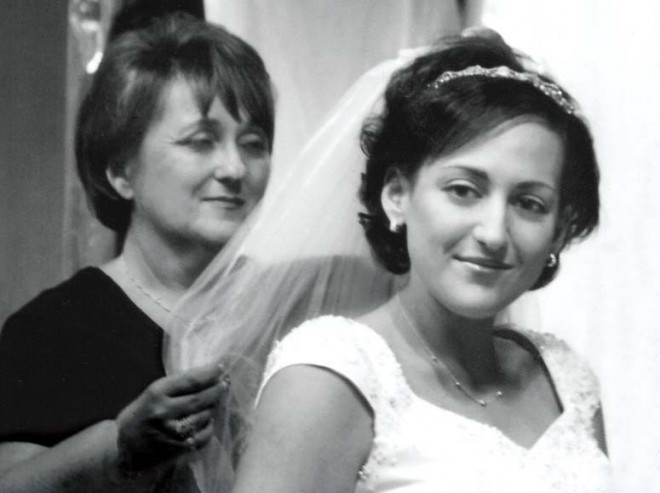 As Pamela Shainhouse watched her 25-year-old daughter exhale her final breath, she questioned her own will to carry on. That day in July 2006 marked the end of Allison Shapiro Amar’s seven-year battle with cancer, and Pamela had stood by her daughter every step of the way. Now she was gone.

“She was my best friend,” says the rosy 58-year-old as she sits at the dining room table of her Toronto home with a photo album laid out before her. She flips the pages, revealing photo after photo of her daughter, Alli. The images show a beautiful young woman, but they also reveal someone who endured massive fluctuations in weight. In one photo she’s a size 12. In the next, a 20.

Beside the album lies a sheet of colour swatches for the fall collection of her clothing line, Allistyle. The concept is the brainchild of this once inseparable mother-daughter duo: stylish, flattering and eco-friendly clothing for women size 10 and up.

A vibrant and strong-willed teenager, Alli always dressed with flair. “She just had an eye for fashion,” says Pamela, smiling. “She could wear pyjamas and diamonds together, and it would actually work.” Alli was a social butterfly, and it came as no surprise to her mother that the tall, bright-eyed girl wanted to study theatre production—she adored the behind-the-scenes action of the stage.

The diagnosis came in February 1999, when Alli was 19: Hodgkin’s lymphoma, stage 4B—the disease’s most advanced stage. Alli would later write about that life-changing instant on Alli’s Journey, the website of her charity for young adults with cancer: “It is hard to explain the feeling of being thrown into a tornado of emotion and change upon hearing three words. ‘You have cancer.’ At that moment and forever on, nothing else is more important.”

The first treatment protocol called for six months of chemotherapy followed by five weeks of radiation. Her doctors prescribed a powerful steroid to combat the intense nausea that accompanied her chemotherapy. Determined to complete her studies on time, Alli would receive radiation at Princess Margaret Hospital and then head straight back to class.

“Alli wasn’t a small woman, but she wasn’t big either,” says Pamela. But during the six-month span of her first treatment protocol, the steroids caused an 80-pound weight gain. It was a gradual change, but one that eventually pushed Alli to a size 20, well outside the size range carried by most Canadian stores.

Pamela vividly recalls the moment they both realized how little was available for women above a size 10. “Alli needed to buy some pants, so I took her to a plus-sized store, and what she saw from the outside made her start to cry,” recalls Pamela. “She said, ‘Mom, I’m not going in there. I haven’t been inside, and already they’re telling me that I’m different, that I’m fat.”

Instead of despairing, the two women found inspiration in the moment: If non one was making beautiful, stylish clothing for women size 10 and up, why shouldn’t they fill that gap? As Alli’s cancer repeatedly regressed and returned over the next three years, the idea never stopped percolating. And Alli never stopped living; she graduated from her four-year program at Ryerson University in just three years.

And then she met a man named Philip Amar on jdate.com. “When I told Philip about my illness, instead of running away or treating me differently, he stayed by my side where he’s been ever since,” Alli later wrote. They were married five years after Alli’s diagnosis.

“The wedding was beautiful,” says Pamela, flipping through an album of the special day. The photos show a beaming bride, with her mother as maid of honour. Soon after, the cancer worsened. “Their first anniversary was in the hospital, where Alli was having a bone marrow transplant,” says Pamela. “She didn’t make it to their second.” On July 12, 2006, Alli passed away peacefully.

“When you lose a child, it’s like starting over again,” says Pamela. “You never truly get over it.” It took her 18 months to make any decisions at all. Once she felt ready, she set to work and started realizing the dream that was Allistyle.

The first line consisted of five pieces Alli would have loved. It was early 2010 and the collection was almost as they had envisioned it. But something was missing: the youthful spark that had come from Alli.

That spark came serendipitously in June of that year, in the form of a curvaceous young woman who happened to sit next to Pamela at Full Figured Fashion Week in New York. It was Whitney Thompson, the recent winner of the 10th season of America’s Next Top Model. The size-10 stunner and Pamela later chatted about Allistyle, and within days, Whitney signed on to become the new face of the burgeoning Canadian line.

“I immediately fell in love with Pam’s story and knew that I had to be involved in some way,” says Whitney, who believes the concept of Allistyle is long overdue. “It isn’t fair that these women have been almost completely ignored for so long, and the available options have always been such low quality and uncomfortable.” As for the plus-sized label, it’s one she’d like to leave behind. “Plus size is size 6 in the fashion industry, when the average North American woman is a size 14. Plus what? It’s illogical.” Pamela is thrilled to have Whitney on board, saying, “It’s as if Alli brought her to me.”

As for the company, Pamela is proud to have created such a legacy for her daughter, though it’s not always easy. “It can be difficult with Allistyle as my job, because she’s always on my mind, but she would be anyway,” says Pamela. “If Alli could see me right now, I know she’d be absolutely thrilled. She’d be saying, ‘Way to go, Mom.'”