How A Rescue Dog Changed My Life

Harriet was a funny-looking beast. She was terrible at going for walks and always managed to find the most disgusting things to roll in. And yet this little dog changed everything. 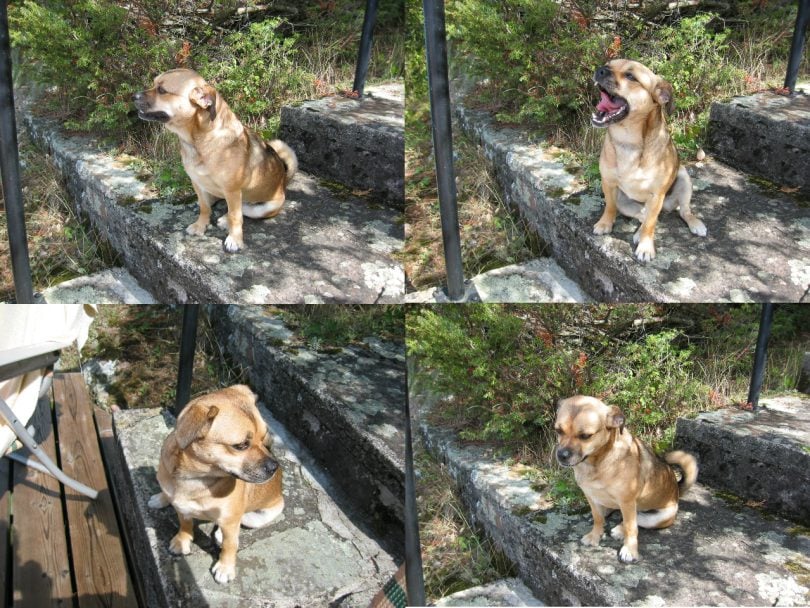 Harriet wasn’t my first choice. That would be Gigi, a glossy heartbreaker with bashful eyes and floppy hound-dog ears. She wasn’t even my second or third choice—Wrigley, a gentle, tawny puggle puppy, and Marley, a snaggle-toothed terrier mix had already stolen those spots. (In the days before Tinder, poring over rescue-dog profiles on adoption sites was one of the fastest ways to go from love at first sight to utter heartbreak.)

Harriet looked as though she’d been assembled from a collection of random dog parts. She was both exceptionally long and oddly barrel-chested. Her curly tail and abbreviated snout suggested she was part pug, but her proportions and prey drive betrayed some kind of terrier lineage. She had a beagle’s soulful, black-rimmed eyes, a German Shepherd’s mottled brown-black colouring, and the delicate splayed toes of a dainty lap dog. From certain angles, she looked like a squirrel; from others, an otter.

She was being fostered by a woman who had also taken in a litter of baby boxers. When I arrived, Harriet ran up, desperate to avoid the swarm of voracious puppies—they’d mistaken her for their mother and clamoured for a turn to nurse, unswayed by the fruitlessness of their mission. Harriet looked absolutely horrified (as horrified as a dog can look). That was the moment she became the dog of my heart. I carefully scratched her walnut-shaped head and her velvety ears. I didn’t see the outdoor exuberance I’d read about in her profile, but I did recognize the self-contained slow burn of a fellow introvert.

Her baby-induced horror struck a chord—back then, in my mid-20s, I couldn’t imagine anything less appealing than becoming a parent. Taking care of myself was a reasonable enough challenge: I could cook, I paid my rent on time, I made it to the dentist every so often. I could handle a dog—she’d run to greet me! We’d be sidekicks, ambling through the park!—but I wasn’t sure if I had the capacity to love a child. Offering Harriet a forever home was all the forever I could fathom.

The first weeks with Harriet were quiet ones. Unlike previous pets who cuddled under the covers and burrowed into my side, she perched on the arm of the couch while we watched procedural detective shows—close enough to pet but far enough away to preserve a certain necessary distance. Her tail, coiled around itself like a kid’s party-favour noisemaker, began to wag whenever she spotted me, unfurling like a joyful ribbon. When I took her to the vet for the first time, he listened to her chest and sighed happily—her heartbeat, he said, was unusually strong and steady for a dog of her size. “I have a feeling,” he added, “that this dog is going to be exceptionally important in your life.”

If I hadn’t been waiting for his instructions on how to treat her (repulsive! Puppy-induced!) case of worms, I would have groaned. Adopting a dog wasn’t going to alter my life. I was content enough, if moody and somewhat unmoored. I’d spent the previous half decade oscillating between yearning and despair in a series of relationships that, my therapist would posit, were designed to preserve a certain distance from making a real connection. Even my previous pets, for all intents and purposes, felt more like convenient background characters. As I reached a point in early adulthood that seemed to promise a coalescent sense of identity, I’d settled into this sense of myself as slightly separate and off-kilter.

Then came Harriet, whose tender nature and vulnerability demanded a certain stillness and focus. I didn’t know much about her history, but it was clear she’d been treated poorly. She was quick to flinch and cower in corners. If I wasn’t steadily there, if I didn’t observe and respond to the gentle boundaries she established, if I expected her to behave like a different kind of animal, she wouldn’t—she couldn’t—build trust with me. It’s silly and a bit cliché to say she grounded me, but she did.

The vet’s loopy prediction turned out to be true. 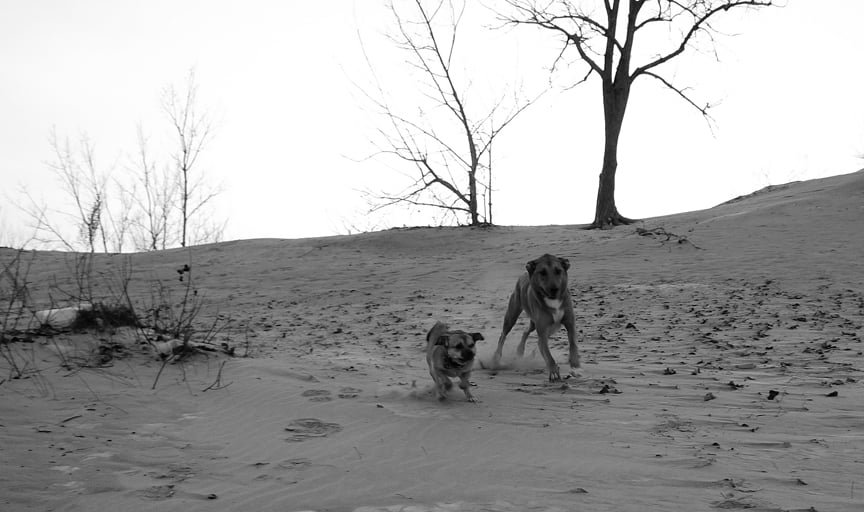 Within a week, I found myself trying to make small talk with a cute colleague who’d complimented my necklace. We bonded over the ludicrously intense vetting process required when adopting rescue dogs—she’d been rejected by one organization because she said she was considering having a child at some point—and wound up planning a park date with our canine companions. A little over a year later, we bought a house together and moved in with Lula B. (her sheltie-Lab mix) and Harriet. The whirlwind decision to simultaneously shack up and invest our collective life savings in a little red-brick semi seemed both dizzyingly romantic and like the inevitable punchline of a lesbian U-haul joke.

Accustomed to occupying separate spaces (and responding to our own needs), the humans in the house bristled and bickered. The question of kids—to have or not to have them?—loomed on the horizon, an ominous low pressure system that caused storms with increasing frequency. As surely as I had always believed I wasn’t meant to be a parent, my partner’s heart was committed with equal ferocity to becoming a mother. But even when we struggled, the animals thrived. Settled in her home, surrounded by her pack, Harriet seemed to find new joy, a kind of contentment in stability and connection.

Harriet wasn’t perfect. When I first adopted her, she refused to pee or poop on grass, opting instead for the middle of the sidewalk (gross)—and, once, a bath mat (even grosser). She was profoundly fearful of men; the presence of even the gentlest, most dog-attuned of our male friends would unleash her latent hound, and she would cower and bay inconsolably. She had a penchant for finding (and rolling in) the most disgusting, most decomposed dead things. She walked terribly—no amount of positive training, no anti-tug harness could prevent her from pulling and straining on the leash. She was a true terrier, and would take off at light speed at the slightest rustle in the brush. But to me, her idiosyncrasies and imperfections felt more like endearing quirks. If I’m honest, I identified with her breed-specific eccentricities: after living alone for my entire adult life to that point, I could be bullheaded, overly sensitive and easily triggered. At times, I’d become consumed by my own fixations and block out reason. I wasn’t partial to rolling in detritus, but I did have an abiding love of pungent pickles. We described her as true goodness, the purest heart in our household.

I never knew Harriet’s exact age—one of the unavoidable pitfalls of taking in a rescue whose backstory is murky—but I’d estimate she was only five or six when she broke away from her walker. It was a few days after New Year’s, a forbiddingly cold winter day. We’d asked that Harriet be kept on leash—she’d been acting erratic, at one point bolting out of the house and disappearing for hours. The weather was horrible; we didn’t trust her instincts. For whatever reason, the walker ignored our request and set her free, watching her bound over drifts and streak through the snow-covered woods. Harriet didn’t come when he called, but we did. We searched all day, fingers and toes numb and throats raw. That evening, exhausted and defeated, we allowed ourselves to be talked into heading home. Less than an hour later, my phone rang. Harriet had been hit by a van. A kind bystander—herself the owner of two rescue dogs—rushed over to help. By the time we arrived at the vet to meet them, it was too late.

I had lost pets before. When I was a kid, my cantankerous budgie had a sudden heart attack. In the year before I met Harriet, I went through the gruelling process of putting down my dilapidated rescue mutt; not long before she died, I said goodbye to our 16-year-old family dog. Each time, I was devastated. And yet, until Harriet’s death, I hadn’t encountered such a shattering loss. Her absence felt like a massive gouge, a missing limb, an arrhythmia.

I was stunned by the magnitude of my sorrow. People often struggle to understand the depth and breadth of grief that can accompany the loss of an animal. A simple theory is that if you’re not a pet owner, you don’t get it. But that’s not quite right. I had loved dogs before, but I had never felt so hollow and bereft. I was consumed by anguish. It lasted for months—years, even—a thick, heavy haze; the gnawing reminder that this essential, hopeful being could be gone.

The nature of Harriet’s death was part of it: given the circumstances, I couldn’t stop my mind from a perpetual whir of guilt-laden what-if scenarios. Why did we let her go on a walk that day? Why didn’t we get to the park sooner? Why did we stop searching when we did? I had failed to grasp how deeply this dog had embedded herself in my heart, how much I’d grown to appreciate her eccentricities and vulnerabilities—how remarkable it was that, for whatever abuse she’d endured, she’d retained such essential sweetness.

Somehow, the process of reckoning—coming to terms with my regrets; missing Harriet’s imperfections as much as I missed the rest of her—shifted something fundamental inside my own psyche. I’d never felt equipped to be a parent; in the wake of this great loss, I started to open up to that possibility. There’s something about the way a dog wordlessly compels you to pay attention to its needs, the way it has the ability to fill an outsized amount of space by offering comfort with its simple presence, that can pull you right out of yourself and shift your equilibrium. I had always believed I wasn’t capable of that openness; that I’d freeze in the face that kind of vulnerability, that I was too rigidly invested in my own needs and idiosyncrasies to fully accommodate others. I couldn’t comprehend how to fix things when I encountered the mistakes I’d inevitably make. And I couldn’t—I wouldn’t—make space for that kind of boundless love because I was terrified that I couldn’t survive the aftermath if I lost it.

A little more than two years after Harriet died, our first kid was born. His brother followed almost three years later. They both love dogs.

Harriet wasn’t my first choice, but she may have been my most important one.

Sarah Liss is a writer, editor and cultural critic whose work has appeared in The Walrus, Toronto Life, New York, The Globe and Mail, Hazlitt and many other publications. She lives in Toronto with her partner, kids, and two dogs.