My Father Was Dying. So I Brought The Wedding To Him

When co-workers ask about my wedding, my reaction is rehearsed and polite. “It was great. It was amazing!” I smile and look happy. It’s a response they want to hear. What I don’t tell them is, my father was dying. 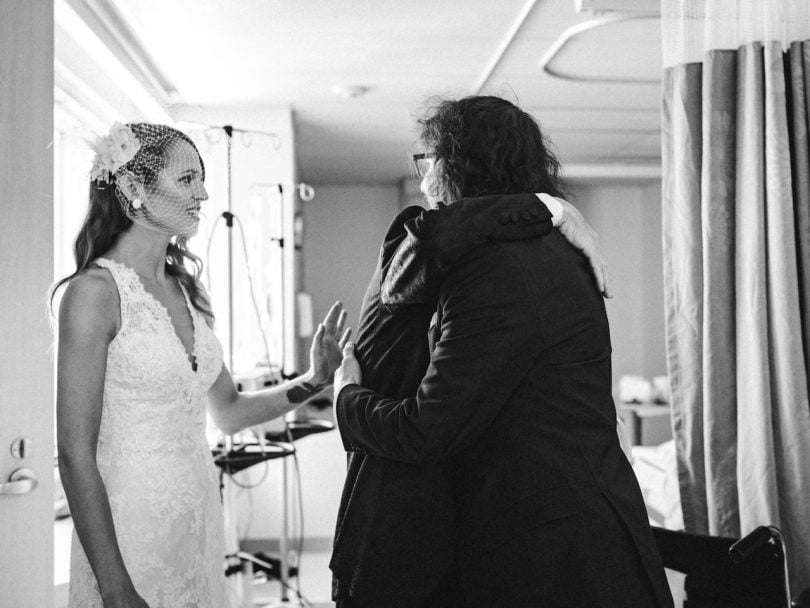 I had never really imagined my wedding before. Father-daughter dances, garters, so many wedding things weirded me out. But here I was. Suddenly engaged to the best man I’d ever met. It was our turn to obsess over table settings (guys, that sh-t is hard!) and pray we could grow abs and impressively high cheekbones in a matter of months.

Weddings demand a certain amount of perfection. One of my friends lovingly told me, “You’re never going to look as good as you’ll look on your wedding day.” It seemed like a threat. There was no room for error or cellulite. Never mind cancer.

Six months before the wedding, my dad was diagnosed with MPAL—mixed-phenotype acute leukemia. Just weeks before he’d been rocking out on stage with his Rolling Stones tribute band. His Jagger-esque locks at 63 were his pride and joy. His band, Hot Rocks travelled all over the world—sometimes mistaken for the real deal. My dad noticed a change in his appetite and his heart would race when he climbed a few stairs. Certain something was wrong, my dad drove himself to the hospital. Even the M.D. was shocked at the results of the blood tests. “Mr. Wotherspoon, you are a very sick man.”

Since my dad was otherwise healthy, he was given an astringent chemo cocktail in hopes of blasting the cancer out of his system. A full recovery was possible. Unlikely. But possible. We held on.

“So, when’s the wedding?” asked a nurse in lollipop pink scrubs as she held a vial of my dad’s bone marrow up to the light. Oh right. I thought. The wedding. I was still getting married. I adjusted my baby blue surgical mask and replied, “June 16th.” She placed the vial on a metallic tray and adjusted my dad’s IV with a casualness reserved for nurses who have seen some serious sh-t. “Oh, that’s plenty of time. You’ll be outta here way before then!” Her cadence was so confident and casual you had to believe her. She was right. My wedding was still six months away. There was plenty of time.


The fate of my father was uncertain, but people kept reminding me, “You can’t just stop living.” Life does not stop for sick people. A fact I still find devastating. My dad could be dying! Yet people still bumped into me on the streets, doctors laughed on coffee breaks, planes flew overhead, airing crappy rom-coms. Business as usual. Everyone should be upset, I thought. It was a ridiculous thought. But it’s what I was thinking all the same. 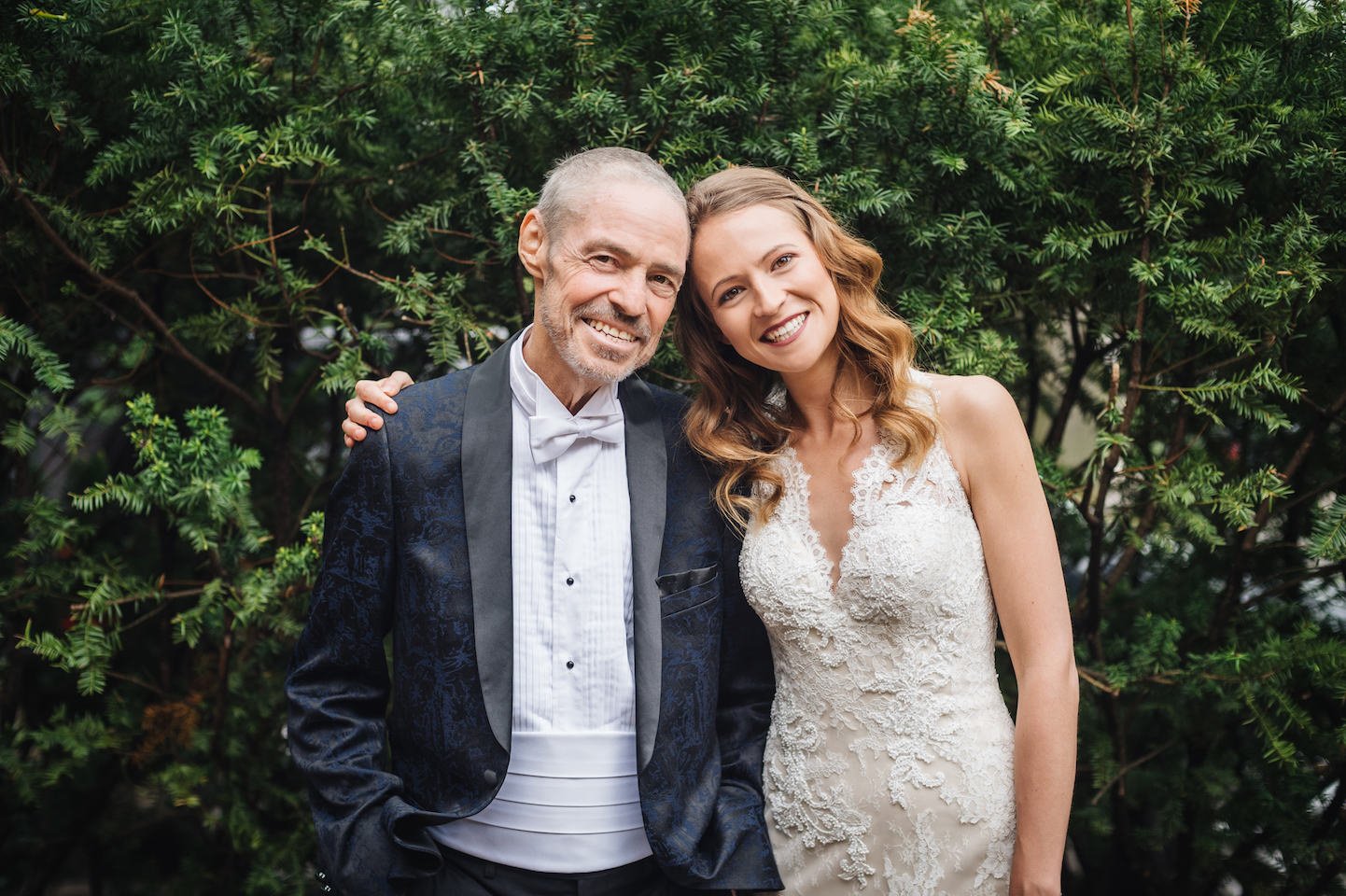 Despite my feelings of protest, life did continue. After all I still needed a wedding dress…

“We don’t have to go in,” said my sister, outside the ivory white bridal shop. We both cried. Our dad was our best friend. He was a man who preferred shopping over football and frequently wore woman’s sunglasses because he thought they were flattering (they were!). We cried because despite all the positivity people insisted drowning us in, we felt negative and scared.

Inside the bridal shop we were greeted with flutes of champagne. I immediately noticed my friends’ smiles were too large. I knew they were trying to keep it positive. Stories of my dying father were not welcome here. This is a place where dreams come true. I mean I was standing beside a bucket of rose gold tiaras. No one wanted to hear about how I just watched a doctor wrench a hollow needle into my father’s back. “So tell me,” said the bubbly sales associate. “What kind of dress are you looking for?! Are you like, a boho chick?”

A day before my dad’s 64th birthday, he was released from the hospital, officially in remission. I have never breathed a bigger sigh of relief. My dad would live with my fiancé and I, so that we could take care of him—he was still very much in a vulnerable immune-comprised state. The next few months leading up to the wedding were some of the best times I ever spent with him. I had a dad. A real live living breathing dad. Who I could spend time with! Doing just about anything with him became a luxury. Going to the grocery store, watching Seinfeld re-runs, Stephen and my dad even started making music together—my dad on guitar and Stephen on piano.

“His blood counts are better than mine!” The nurse practitioner would say at my dad’s weekly check-ups. My dad returned home, went back to work, and even started going on bike rides. He was overcoming the odds and then some. 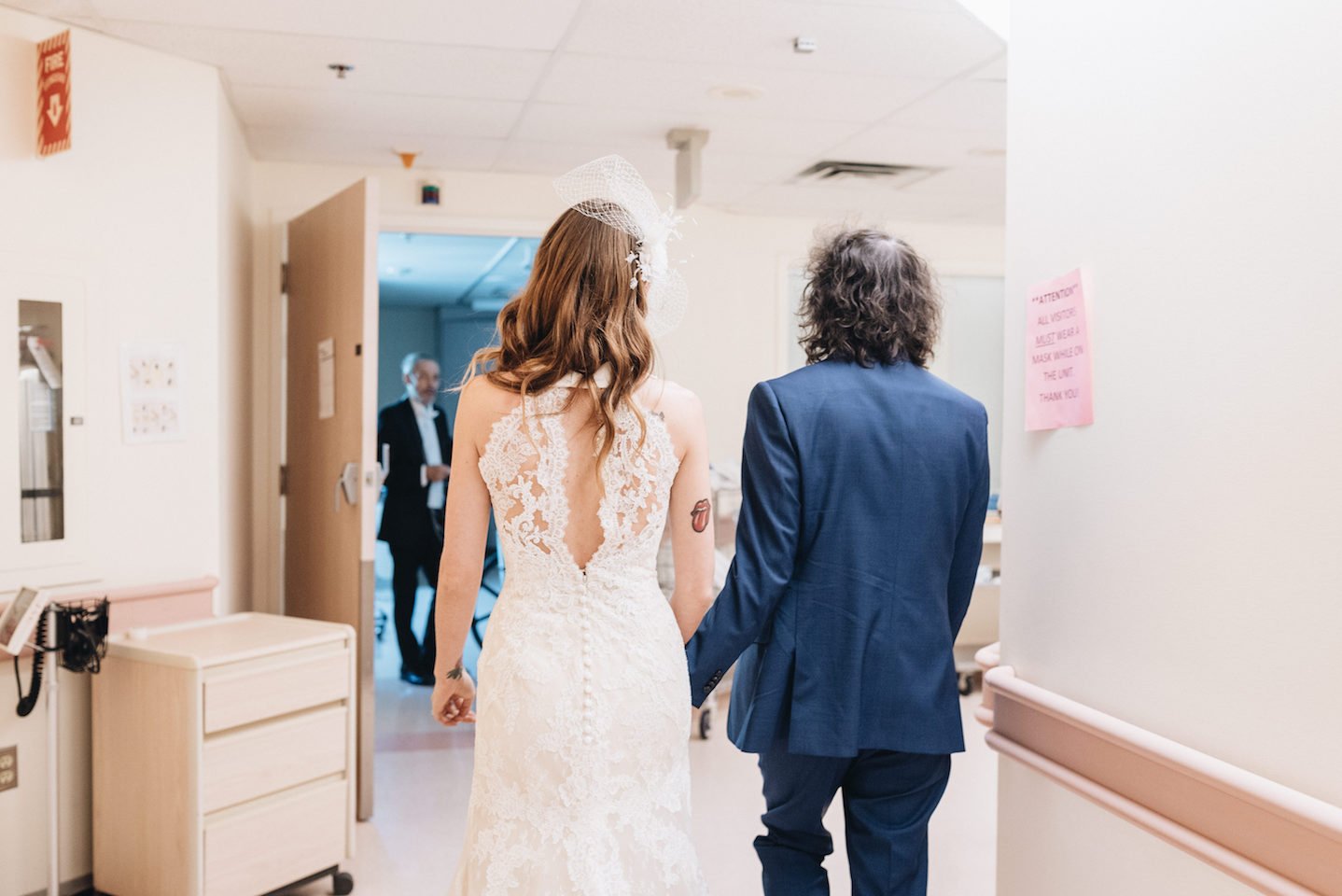 Two weeks before the wedding, we got the news. The cancer was back. When I got to the hospital, I found my dad in a transfusion room where he’d received IV medication many times before. They were going to start a new experimental treatment. We sat together on the bed so close our knees were touching. We hugged each other and cried.

“There’s no way he’s going to miss the wedding,” my sister reassured me. “It’s his daughter’s wedding. The doctors have to let him go.” I could not believe it was really happening. It was time to do this this super adult thing and my dad wasn’t going to be there. The man who was my personal chauffeur for 17 years, the man who came to every single one of my community theatre plays and slept through all of them. I could not do this without him.

So, I decided to take the wedding to him.

In what can only be described as a wedding miracle we managed to organize a hospital wedding in a matter of hours. We’d still carry out the regular ceremony in the evening but during the day we’d be at the hospital for a private ceremony and the marriage license signing. It would be rushed, but it was possible.

On the day, I was stuffed into the back seat of my mom’s car as my sister chauffeured us to the hospital. We met Stephen’s family in the lobby and together, as one big family, marched past Druxy’s deli (and excited on-lookers)—we were, after all, a real live wedding procession. When we reached my dad’s floor, the excitement was palpable. This is way cooler than a normal wedding, I thought.

And there was my dad! My real, live, living-breathing father. He was here. We were all there. We were together.

The rabbi led the intimate ceremony on the sunny ninth floor terrace. My dad was decked out in a dapper tuxedo and were it not for the tiny nasal breathing prongs, he could have passed as a totally healthy father-of-the-bride. The rabbi placed Stephen and I back to back. Our families on either side. A marriage ceremony that, at a different moment in time, would not have had much meaning for me, was now filled with intense emotion. We were two families. That loved one another dearly. And we all knew what we could lose.

My dad and I sat side by side as he signed my marriage license. I was crying harder than I ever had before. It turned out this whole marriage thing did have meaning to me. It wasn’t about some weird archaic ceremony where my father gives me away (gross) and it certainly was not about weaving perfect flower crowns (grosser). 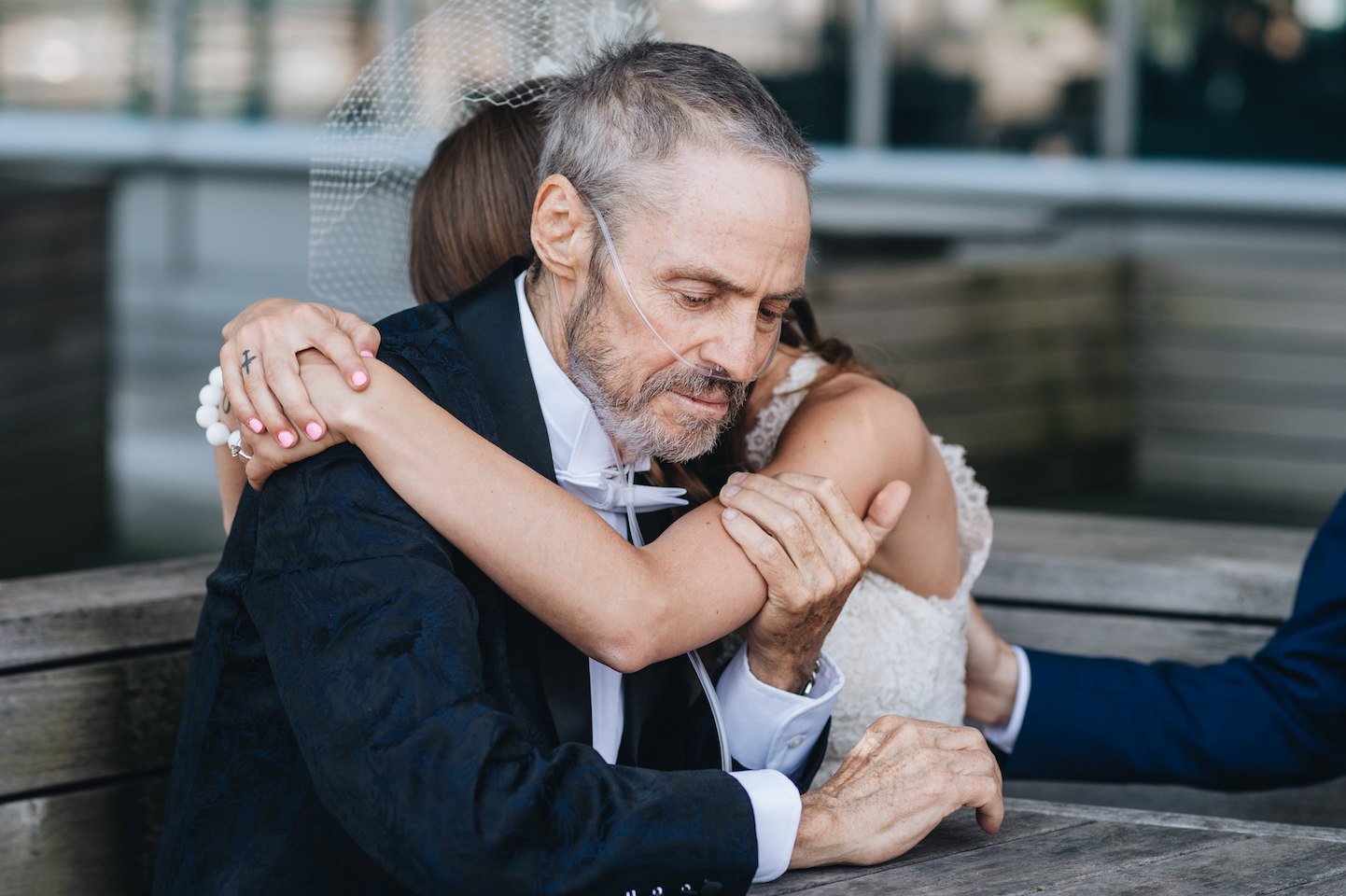 So many people want their weddings to capture a moment in time where everything is perfect and everyone is skinny, and healthy, and glowing. My wedding captured the moment my dad was dying. Arguably the worst, most horrific, most heart-wrenching time in my life. But, we were together.

My father died less than a month later.

When co-workers ask about my wedding, my reaction is rehearsed and polite. “It was great. It was amazing!” I smile and look happy. It’s a response they want to hear.

I don’t tell the whole story of my wedding because I don’t want them to be sad for me. Yes, I had a sad wedding. But it was also the best f-cking wedding ever.

Erin Wotherspoon is a writer and entrepreneur.