What it's like being married to astronaut Chris Hadfield

Their relationship has had its ups and downs, but Helene Hadfield reveals that back here on earth all systems are go! 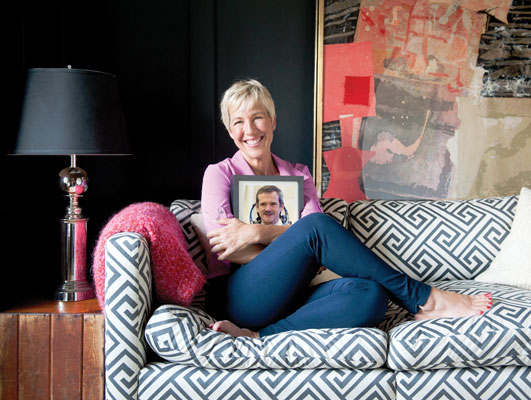 Chris doesn’t leave his socks on the floor, I do!” says Helene Hadfield. “One of my biggest complaints, though, is that it sucks being the spouse of the person who does everything perfectly. I do a lot of stuff well, but he does almost everything better. That said, I’ve always understood him — and that’s why we’re s till married.”

When space hero Chris Hadfield recently announced his retirement from the Canadian Space Agency, he said he was stepping aside to make room for younger astronauts — and, more importantly, to make good on a 30-year promise to his wife that he would one day be home to stay.

The Hadfields have, at times, been in the longest-distance relationship in the universe. Chris’ last mission was five months long, but Helene shrugs it off . “We’ve been doing this our entire married life,” she says. “When your partner’s away for long stretches of time, you both get used to doing things your way: your own cooking, the way you fold your clothes, what time you get up in the morning.” Every time Chris returns to earth, he must readjust to domesticity as well as the debilitating effects of returning to gravity. He goes through months of rehabilitation each time. “There’s some griping involved when he comes back, but we’re used to it,” says Helene.

Chris Helene met while they were in a play together at White Oaks Secondary School in Oakville, Ont. Chris was a farm boy, and Helene lived in an apartment with her mother. “I was only 15, but we knew that we were special together,” she says. Chris had wanted to be an astronaut since he was a kid, but he wasn’t the only one with dreams. Helene wanted to be an actress. But, for the only daughter of a single mother, pragmatism won out, and she went to Ryerson University to study accounting while Chris joined the Canadian Forces, in pre-astronaut training as a fighter pilot. They got married in December 1981, when she was 20 and he was 22, and had three children in rapid succession.

The early years were tough. “When the kids were little, we had no money, and I had a husband who was travelling all the time,” says Helene. “We were trying to figure out how we were going to be in our marriage and who was going to take on the burden of certain things, and that’s a hard balance to have — especially with an overachieving husband. I thought I would be working, and I was, but just at home. At one point I said to Chris, ‘You have to choose the life you want. Do you want a family and a career or a career only?’ That was a real turning point for us.”

A few days after the conversation, Chris dropped some of his extra commitments and refocused on his family. “Maybe this is old-fashioned, but I think that often for someone to reach their zenith, the other person has to step back,” Helene says. She walked away from a programming job when Chris’ work demanded yet another move. “Even though you know you could be the superstar, a long time ago I recognized that he could get there, and there was only this one shot. We worked hard together to make that happen.”

In addition to a lot of time spent apart, the couple have had to uproot themselves constantly for Chris’ career, from basic jet training in Moose Jaw to flying CF-18s in northern Quebec. Eventually Chris was named director of operations for NASA, and the family moved to Star City in Russia, where they lived in an army-base-like set-up with other astronauts. Overall, they’ve travelled to more than 50 countries, for work and pleasure.

Everywhere they’ve moved, Helene has adapted by finding new interests. “I love variety, and that’s what has made this life so great,” she says. Helene has spent time in law school, been a chef, worked for motivational speaker Tony Robbins and learned how to ride horseback.

Watching her husband leave for work in a space shuttle has always been a little scary, but the worst time was during Chris’ third and final mission in December 2012, when Helene developed a nasty staph infection. “I could barely stand up,” she says. “I was really scared because I thought I might die. It was the first time I felt really alone.”

Helene also had to cope with the fame that followed her astronaut husband wherever they went. There was a time in the ’90s when women would slip Chris their phone numbers at every opportunity. “Fortunately, we’ve always been very comfortable with our marriage,” Helene says. “We trust each other.”

After 32 years the couple continue to support one another’s whims and ambitions, even the more offbeat ones. “If I say, ‘I want to walk the Inca Trail with a friend,’ he says, ‘Yay,’” says Helene. “When he says he wants to go and fly a Sabre fighter plane, I say, ‘Yay.’ We ‘yay’ each other.”

Although Chris has retired from space exploration, there are plenty of plans on the horizon: his memoir, An Astronaut’s Guide to Life on Earth, plus speaking engagements and teaching. Chris and Helene recently rented a house in Toronto — a base for their kids, who are now 30, 28 and 27. “Nowhere feels like home to us as much as here,” says Chris. “I ironed a shirt last night and hung it in the closet, and I realized that it might actually stay there for more than a week. And that felt great.”

“I’m pretty happy with the choices I’ve made,” Helene adds. “You make sacrifices, but it doesn’t have to be bad. I really do think you can have it all — just maybe not all at the same time.”

Watch more: Helene Hadfield shares her thoughts on marriage, being an astronaut’s wife and what it’s like now that Chris has retired. Click on the video below.