Imagine having 85 of your closest kin over for dinner. Terrifying, isn’t it? But not for Hudson’s Bay boss Bonnie Brooks. We got behind the scenes at her family reunion —  turns out it’s as easy as (homemade) pie 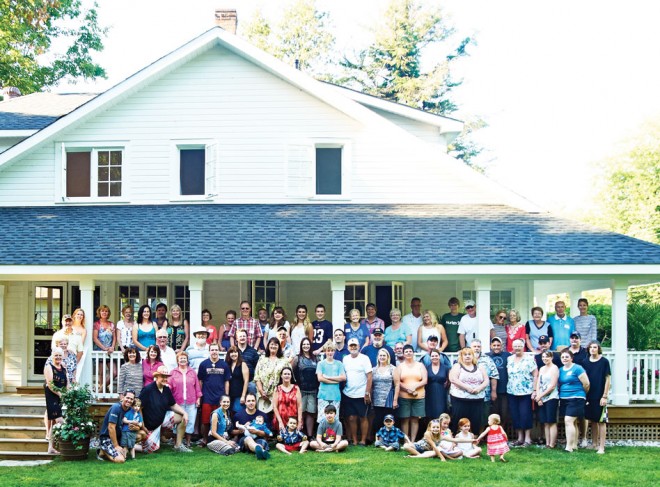 The Forman family reunites 55 years after the special event was featured in Chatelaine in 1959. “I once again felt connected to something that had been lacking in my life, “says Sue James, 59. “The hugging and kissing never seemed to stop; some hugs lasting so long, they left an imprint on my heart.”

One of the first cars to wend its way up to the trim white cottage on a cliff overlooking Ontario’s Lake Simcoe belonged to Marilyn Forman, age 67, who had made the trip from Dartmouth, N.S. Not far behind were Sue James (59) and her daughter Kassia (28) from Leduc, Alta. Even cousin Mary, who runs a dogsledding business in the Yukon, was flying in for the festivities. Soon, the air was filled with the jubilant honking of car horns announcing each new arrival  — a tradition dating back to the first Forman family reunion, 62 years ago.

“We stopped counting at 85 people,” laughs Kristin Kidd, who organized the reunion at the behest of her aunt Bonnie Brooks, vice-chairman of Hudson’s Bay Company. Bonnie is the granddaughter of Walter Forman, who launched the yearly event that became so renowned it was celebrated in the pages of Chatelaine back in 1959. But as the years passed and the family grew (Walter had 10 children), relatives were scattered across the country. Soon, the family was gathering more frequently for funerals than for reunions — until Bonnie, who was five at her first reunion, decided to hold the first full-scale get-together in many years. “I think we just started taking our very large, and very close, family for granted,” she says. “It wasn’t until recently that I realized how special it was.” 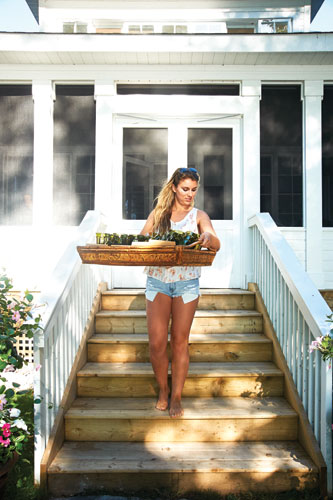 Sara McLaughlin, 18, is tasked with carrying 90 glasses out to the table. Photo, Sian Richards.

Special indeed, considering the way families have shrunk over the past few decades. For the first time ever, there are more Canadians living alone than there are couples with children. In 1961 (nine years after the first Forman reunion), the average family contained 3.9 people; now that number is 2.9. Last year, a German study found (not surprisingly) that close family relationships lead to increased happiness and life satisfaction — so what better reason to call the clan together? “I’m an only child, have lost both my parents and live where I don’t have easy access to family,” Marilyn says. “I’m really glad I made the trip. It was so nice to be around family, to reminisce about old times, and to just be happy in each other’s company.” 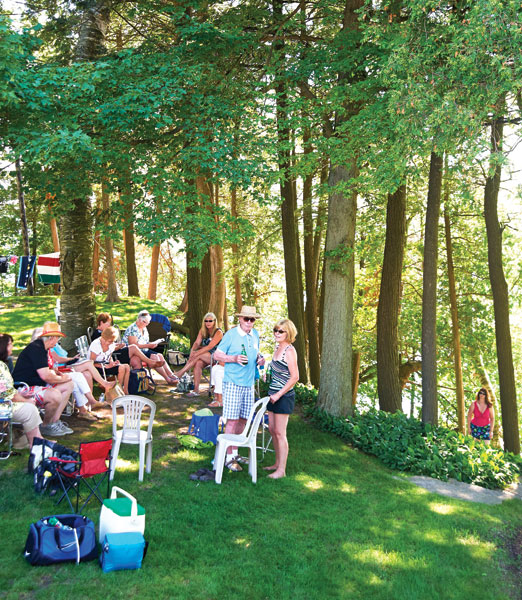 The family relaxes in the shade. “There is a quiet security in knowing you’re part of something bigger, that you have history and roots,” says Sharon Cuillerier, 69. “I still get all warm and fuzzy when I think about the reunion.” Photo, Sian Richards.

In the end, five Forman generations gathered last July to celebrate all things familial. Name tags were necessary, as many of the relatives had never met before. The youngest attendee was Cameron Devereux, at six months, and the oldest was Rose Henderson, at 94. “My favourite moment of the day was greeting everyone as they walked up to the veranda where I was sitting,” Rose says. “It was quite a revelation to see the children who were no longer children but adults, and all the new little ones — I can’t possibly remember who they all belong to!” Later, she sat in a chair by the cliff and watched the family play by the water, swimming, making sandcastles and paddleboarding along the beach. “What made me laugh the hardest was the water volleyball game,” she says. 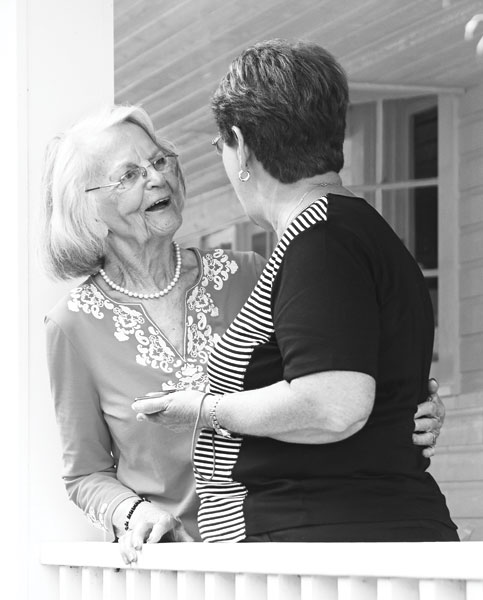 Rose Henderson, 94, greets new arrivals. “Family connections are something money can’t buy,” she says. “We’re over-blessed to have such a big family to enjoy, to laugh together and reminisce with.” Photo, Sian Richards.

By mid-afternoon, there was enough of a breeze to fill the sail on the Laser. Fourteen-year-old Thomas Kidd (Kristin’s son) took his 85-year-old great-great-uncle Murray, whom he’d met for the first time that morning, out on the lake. “Murray always had a passion for the water, but had some hiccups with his health and hadn’t been in a boat in 25 years,” Kristin says. “It was a very special moment — and there were many like it throughout the day.” 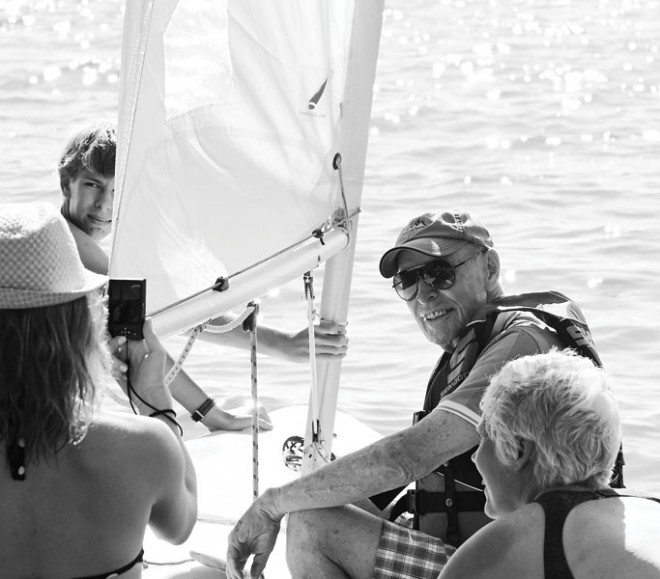 Thomas Kidd, 14, and his great-great-uncle Murray, 85, met each other for the first time and bonded on board the family Laser. Photo, Sian Richards.

In the 1950s, a chain letter was mailed out to announce the date of the annual get-together. Each family added its news from the year, along with a joke or two, before sending it on. The letter, by then 20 feet long, would be read aloud at that year’s reunion. Kristin used the internet instead but kept up the tradition of adding news and collecting photos. She was the driving force behind the day, and the planning began in March. “I’m an organizer by nature, and it’s fun when you know the outcome is going to be priceless.”

By the time the day of the reunion arrived, Bonnie’s cottage (circa 1904) had been updated with elegant flagstone entryways and a new cedar hedge. Three towering white pines were freshly planted, the beach was raked, the Muskoka chairs were wiped down and a summer playlist to appeal to all generations (everything from Bobby Darin’s “Beyond the Sea” to Daft Punk’s “Get Lucky”) was cued up and ready to go.

Kristin prepped the salads — red potato and radish with fresh dill, strawberry and cucumber with fresh mint — in the morning. “I kept them simple and practical, just washing and chopping. I didn’t want to be in the kitchen for hours afterwards cleaning up.” Due to lack of space (and refrigeration), most of the salads were stored at nearby cottages, and Kristin’s sons worked as runners whenever a refill was needed. “The kitchen was a beehive of activity,” Sue James says. “Full of butts, elbows, mixing, stirring, looking for serving tools and running dishes out to the table.” Extended family filled a table in the cottage with homemade pies, cookies and mini cupcakes with pink, white and yellow icing. Soon, the smoky summer scent of steaks cooking on the charcoal grill signalled that it was time for dinner. 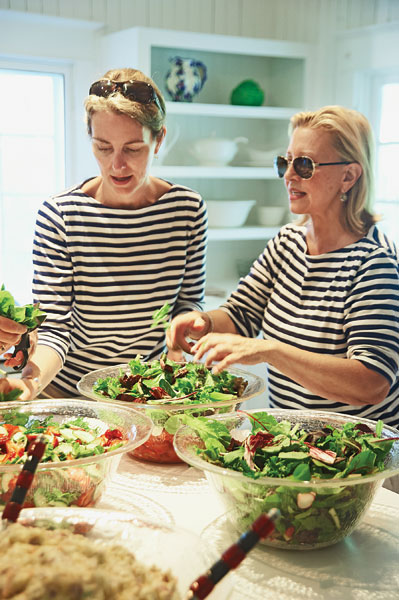 Kristin and Bonnie (in matching tops so they’d be easy to spot) put the finishing touches on the salads. Photo, Sian Richards.

Staying true to tradition, the family was summoned by the ringing of an antique triangle bell and sat down together at one long table. “What cemented the day was seeing everyone seated, everyone smiling, engaged in conversation and enjoying the meal,” Kristin says. “I sat down and thought, ‘Here it is, it’s all come together.’” Kristin had rented a dozen tables to create a single long one, and 100 folding chairs to ensure there’d be room for everyone. Almost every seat was taken. Flowerpots filled with miniature roses anchored the kraft paper runner on the table, and the lake sparkled through the trees at the top of the cliff. “It was the perfect scene,” she says. “And there was so much laughter. We lingered as long as we could, and everyone kept asking when the next reunion will be. There will absolutely be another one, but this time with a much shorter gap in between.”