Bra history: The evolution of a simple (yet elaborate) innovation

Happy birthday to the bra! It’s been 100 years since women were freed from the constraints of the corset and converted to the liberating (and risqué) brassiere. This simple, but architecturally complex, innovation has allowed us to hoist, separate, smooth and enhance. What’s next? Cooling systems, built-in GPS and a whole new way of measuring the girls 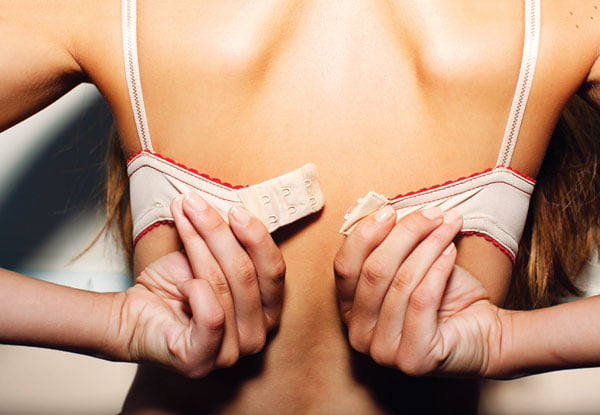 In a perfect world in the not-too-distant future, lingerie stores will stock Julie Steele’s smart bra. Developed at the University of Wollongong in Australia, it’s made with motion-detecting, instantly self-adjusting fabric. When you’re at your desk posting pictures of your pet on Instagram, it’s loose and forgiving. But when you dash for a departing bus, sensors send an alert and — wham! — the bra harnesses your hooters. “I can’t say much more at this point,” says Steele, stressing that she hasn’t yet developed a prototype tough enough to handle regular batterings in a washing machine. Still, fingers crossed.

If you don’t automatically think “innovation” every time you slip into your favourite push-up, contouring, seamless bra, consider that NASA turned to a division of Playtex to fashion Neil Armstrong’s spacesuit for the 1969 lunar landing. And that the U.S. government recruited Maidenform to design military supplies during the Second World War (one of the company’s most memorable contributions: a harness to strap carrier pigeons onto the chests of paratroopers). Or consider that more recently, Japanese lingerie designer Ravijour announced plans for a bra that unclasps only when the wearer is “in love.”

Even the most conventional set of cups and straps is an engineering marvel: a lace-trimmed suspension bridge that uses physics and biomechanics and 50 or more separate components to lift and shape anywhere from five to 23 pounds of flesh (a set of Ds can have as much heft as two small turkeys). Oh, and it needs to stretch comfortably and weigh only an ounce or two. If it can look sexy while doing all that, all the better.

It’s no wonder that Mary Phelps Jacob, a resourceful New York socialite with an “ardour for invention,” wanted to take credit for creating the world-altering undergarment when she patented a bra design 100 years ago. Her ancestor Robert Fulton had designed the first working steamboat. Phelps Jacob hoped to leave a lasting legacy too. “I can’t say that the brassiere will ever take as great a place in history as the steamboat,” she wrote in her memoir, “but I did invent it.”

Actually, she didn’t. The bra’s history stretches back to ancient Minoa, where female athletes wore bikini-like breast harnesses. French and American lingerie makers were working on new designs as early as the 1860s, though most women stuffed themselves into bone- and metal-lined corsets well into the early 1900s.

What Phelps Jacob’s design accomplished, however, was comfort. Fashioned from little more than two handkerchiefs and some pink ribbon, hers may have been the first bra to liberate women’s breasts from corsetry. “The result was delicious,” she wrote. “I could move much more freely, a nearly naked feeling.” She sold her patent to Warner for $1,500, and manufacturers have been aiming for lighter, stretchier, more comfortable bras ever since.

DuPont, the industrial-chemicals producer, offered a huge assist in 1962 when it unveiled Lycra, introducing the possibility of undergarments that didn’t constrict breasts the way that wired, boned and rubberized bras did. Not long after that, the first push-up bra appeared. An inventive Canadian named Louise Poirier found a way to give the breasts an extra nudge skyward, hoisting them together in a pretty little contraption, now legendary, called the Wonderbra. (Her employer, Montreal-based lingerie maker Canadelle, was thrilled — as were the hordes of women who bought it.) During the last few decades, manufacturers have reinvented the bra countless times, experimenting with silicone gels for better lift, replacing stitching with flatter bonded seals and developing the moulded, seamless cup that gave rise to the now-ubiquitous T-shirt bra.

The latest holy grail for designers? A better underwire — one that doesn’t leave scratch marks in your armpit from wires that have popped their seams. Bra technology is top secret, so Warner won’t reveal what it uses to support its Unbelievable Unwire design, but it promises a fit with all the support and none of the metal (the secret lies in a “proprietary composite material”). Triumph’s new Magic Wire Bra, scheduled for release this fall, uses silicon instead of metal to lift more comfortably.

Buttressing is especially important today because women’s breasts are getting bigger. The average bust size in North America has edged up from 36B to 36C, thanks to rising obesity and the widespread use of hormone-altering birth control pills (not to mention all those Real Housewives who are spiking the numbers with silicone).

For bra designers like Tiffany Taylor, a Canadian in London, England, who’s developing a new line for larger-busted women, the shift in the market creates fresh opportunities for innovation. “Our line is de­signed as if there isn’t heavy engineering involved,” she says. “Bras are something women actually make personal choices about. They’re not as trend-focused as fashion, which dictates an awful lot to women. Women buy bras because of how they feel — and how they feel in them.”

Bras also represent a girl’s first public step into womanhood — they may be concealed under clothing, but there’s no mistaking the track lines of a strap under a sweater, or the silent retreat of nipples under a layer of fabric that wasn’t there the last time the boys in geometry class checked. Which explains why women remember their first bra purchase so clearly. For the late Nora Ephron, it was a 28AA, bought at Robinson’s Department Store in Beverly Hills. “I went there alone, shaking, positive they would look me over and smile and tell me to come back next year,” she wrote in her essay “A Few Words about Breasts.” My first time was the polar opposite of Beverly Hills: the dour Ogilvy’s department store in Ottawa. A fitter averted her eyes as she handed me bras to try. I picked a beige one (they were all beige) with a ribboned rosette. As for the fit, this was the late 1970s, and bra makers were focusing on “natural look” designs. I could’ve used a little more scaffolding.

So where is the bra heading next? Some more radical developments aim to turn them into wearable tech, though so far, none have reached the market. The Techno Bra, for instance, has a built-in cellphone, GPS locator and heart rate monitor that can detect if the wearer is in trouble and alert police. And at England’s De Montfort University — where students can actually take a master class in bra design — researchers developed a bra that uses electrical pulses to detect cancer. The stuff that women are likely to see sooner is coming out of places like Silicon Valley, where app developers are applying big data and algorithmic programming to the search for a better fit. ThirdLove, a bra-fitting app launched this year by a former Google executive, promises to find a woman’s perfect size in seconds: All she has to do is snap two selfies with a smartphone.

If you’re thinking that all we need now is a bra that, say, cools you off on a hot day, just check out Triumph’s Cool Sensation Shapewear (the wicking fabric is designed to create a cooling effect). But Triumph’s greatest achievement this year may be decidedly more old school: The company’s rolling out fitting sessions across the country, highlighting often-cited industry estimates that up to 80 percent of women wear bras that don’t fit.

I didn’t think I was one of them — until Melissa, a bra fitter with a distinctly less Presbyterian approach to lingerie sales than that matron from Ogilvy’s, dragged me back into the fitting room for a proper sizing. She didn’t avert her eyes.

Maybe someday I’ll own a bra that’s irresistibly sexy, monitors my ovulation cycle and loads the dishwasher after dinner. But the lessons I learned after my last fitting? Turns out I’ve been squeezing into a C cup when I should have been a D. (Goodbye, bra-line muffin tops.) And I realized it’s time to toss the T-shirt bras I’ve been sporting since the early 2000s. Technology’s great and all, but there’s nothing wrong with a little lace.

Evolution of the bra

1914 Mary Phelps Jacob patents her bra (possibly the first to use the name brassiere).

1917 Bras get a boost from the U.S. government’s decision to ration metal for domestic use during the First World War. Bras used less metal than corsets so they became the undergarment of choice.

1932 Maidenform advertises “uplift bras” that are a departure from the flattened flapper lookof the 1920s.

1940s The bullet or torpedo bra, an architectural marvel with a name inspired by the military, shootsto prominence.

1943 Howard Hughes custom designs a bra for Jane Russell to show off her spectacular cleavage in his film The Outlaw.

1990 Madonna brings back the bullet bra, with a pink-coned Jean Paul Gaultier creation that eventually sold at auction for morethan $55,000.

2014 Jockey releases its new “volumetrically sized” bras in Canada, introducing a new system that aims to reinvent the bra with more than 50 new sizes to replace cup sizes.