Who said it: Justin Timberlake or Justin Trudeau?

They're harder to tell apart than you'd think.

By Christina Vardanis Updated May 6, 2016

They grew up in the spotlight, have walked red carpets and appeared in the pages of Vanity Fair. They’re considered royalty in their respective fields. Their weddings were covered feverishly by the press. They both tour across the country. And they have the same initials: Two letters that, having caught as a moniker for one, has forever linked him to the other.

We’re of course talking about two the JTs — Trudeau and Timberlake. Their (albeit surface) similarities make them easy targets for a bit of “who said it” fun, and with Timberlake a releasing a new single, there’s no better time for a round of “JT, or, JT?”

Take our quiz and see how you do. (Answers below.) 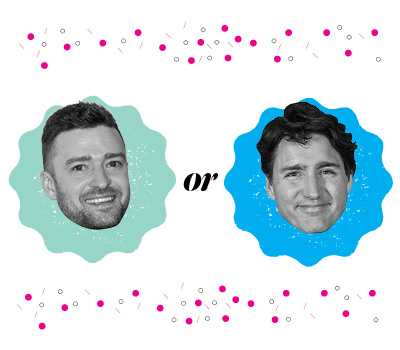 2. “I realize that we’re defined in life not by what we get from this world but by what we have to offer it.”

3. “Everyone knows how challenging it is to balance family responsibilities with a job that takes me across the country and working extremely hard.”

6. “I think the mistake is that people commit to who that person is right then and not the person they’re going to become. That’s the art of staying together, is changing together.”

7. “I think we’re pretty much where we need to be on corporate taxes.”

8. “I don’t see myself as someone who’s ever going to be defined by one moment.”

9. “I sort of locked into the idea that if I could be the perfect son to both of my parents, well maybe that would be enough to keep them together. And ultimately, obviously, it wasn’t.”

10. “I think I have to laugh about the fact that I grew up in public. All these weird stages in my teenage years are documented. Why did no one tell me how terrible some of those outfits were?”

Text Up side down

More:
Are Canadian universities failing students?
Boom! That’s the sound of Trudeau’s honeymoon bubble bursting
I tried to warn women about Jian Ghomeshi — and it nearly destroyed my life