Quitting a bad habit: Hanging up on people

I was unaware, until very recently, that I have a very bad habit. I hang up on people. And I don’t mean if you piss me off, I’ll hang up on you. (I’ve learned to say, “Let’s just talk about this later,” and then hang up.) I recently learned that I just hang up on people without saying ‘goodbye.’ 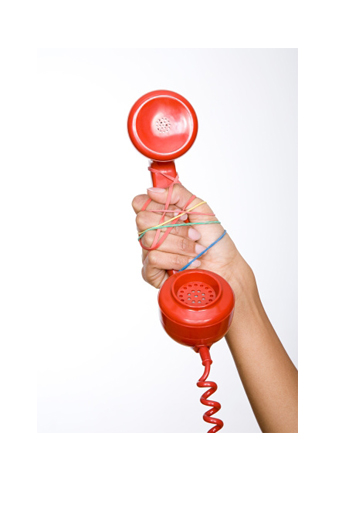 I was unaware, until very recently, that I have a very bad habit. I hang up on people. And I don’t mean if you piss me off, I’ll hang up on you. (I’ve learned to say, “Let’s just talk about this later,” and then hang up.) I recently learned that I just hang up on people without saying ‘goodbye.’

“You never say ‘goodbye,’” my new guy told me, after we had a long conversation and he called me back. “You just hang up.”

“Impossible!” I responded. “Are you telling me I just hang up when you’re in the middle of talking?”

“Sometimes,” he says. “Or you’ll say, ‘Speak later,’ and then before I can even say ‘goodbye’ you’re gone. And I’m still talking because I didn’t realize you already hung up.”

I was shocked. But, upon reflection, he was not the first to have told me this. When I thought about it, a lot of people do call me right back and ask, “Did we get cut off?” Or, “I was talking to you for 30 seconds before I realized you were no longer there.” Or, “Did you hang up on me?”

It’s weird having a bad habit you didn’t realize you had. I can argue that saying “Speak later?” is a way of letting someone know the conversation is over. But, it seems, most people really do need to hear a “goodbye” to know it.

Quite frankly, if you have a bad habit like smoking, you know what you have to do: Go on the patch, get on meds, go cold turkey. But what does one do when their bad habit is not saying goodbye when ending a phone conversation? Where’s the book on that? (Nowhere!)

I don’t want to go through life hanging up on people when they’re in the middle of talking! What if I’ve hung up on bosses? Do I hang up on people I love?

I figured there’s no time like the present to fix this bad habit, so I searched for someone who had kicked an addiction of their own.

Chantel Simmons is the author of Love Struck and Stuck in Downward Dog, and the founder of the hilarious blog on Chantelsimmons.com. After 30 some odd years of being a nail-biter, she managed to kick her habit six months ago. If she could break a life-long habit, certainly she had tips. Here are a couple if you’re trying to change your ways:

1. Simmons says she had been biting her nails her entire life. She agrees that, unless someone points out you’re doing it, you really have no idea that you are. The only person who told her to stop was her manicurist, who she didn’t see all that often. Not even her husband would speak up when she was biting her nails. Ask your friends or family to point out when you are committing to your bad habit, she suggests.

2. When she wanted to quit, she did research. She found that bad habits kind of fall under the category of any obsessive-compulsive disorder. “I’d do it without thinking about it,” she says. “You have to first realize the moments you do it. I would bite my nails mostly when I was anxious or stressed out in a meeting. Or when I was bored, just watching television or on the phone.” (Obviously, for me, I  now pay attention every time I’m on the phone to make sure I say ‘Goodbye.’) I’m also going to take notes when I hang up without saying goodbye, to see if there is a pattern. I’m asking all my friends to tell me when I hang up on them.

3. Simmons said she originally thought about going to a hypnotist, but found on the Internet you can download hypnosis help from iTunes for cheap. She downloaded one about biting nails. After three days, it totally worked for her! (I looked it up, but there was nothing for ‘hanging up on people without saying goodbye.’ However, there are downloads for blushing, getting people to like you more, not caring what people think, getting rid of a sweet tooth.

4. She says she rewards herself for not biting her nails by getting weekly manicures. She suggests I reward myself too, if I manage to quit hanging up on people without saying ‘goodbye.’ How? Well, trust me, I’ll think of something.

5. She says the downloads prompt you to picture yourself as a perfect castle, and you want to be perfect. Well, I can say, hanging up on people mid-sentence does not exactly make me a perfect person. I want to be the best me I can be.

After my chat with Simmons on the phone, I make sure to say “Goodbye.” The old me would have said, “Hope to see you soon,” and hung up right away. The new and improved me said, “I hope to see you soon. Goodbye.”

Did you have a bad habit? If so, how did you break it?