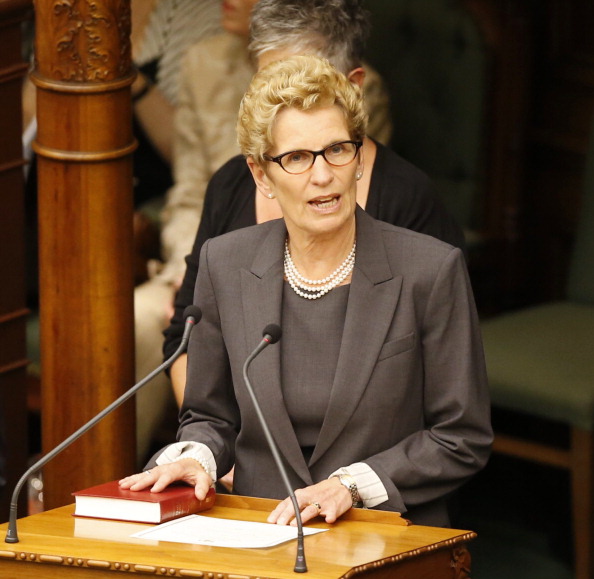 Considering what $41 million in government money buys in Ontario, the province’s new three-year initiative “It’s Never Okay: An Action Plan to Stop Sexual Violence and Harassment,” launched Friday, appears the bargain of the century. Fast-tracked last December when Jian Ghomeshi was dominating headlines and #beenrapedneverreported was trending, the ambitious plan recognizes that addressing sexualized violence requires a multi-faceted approach: a gritty multimedia public-awareness campaign to encourage bystander involvement; beefed-up legislation to create safer workplaces and campuses; training for front-line workers who deal with assault and harassment, including helping those in the hospitality industry recognize high-risk situations; improvements to the judicial system; improved funding for sexual assault centres and education.

Premier Kathleen Wynne didn’t mince words at last week’s press conference at the Central Toronto YWCA. “Sexual violence and harassment is rooted in deeply held beliefs about women, men, power and inequality,” she said, naming it for what it is: “misogyny, which is deeply engrained in our culture, often in unconscious or subtle ways.” She also didn’t equivocate over whether or not we live in a rape culture. We do, she said, defining it as “a culture where ideas, social practices, media images and institutions implicitly or explicitly condone sexual assault by normalizing sexual violence and blaming survivors.” Everyone is hurt by it, she said, not only women.

The announcement laid out the breadth of the new “road map”; details of the “enhanced prosecution model,” for instance, include a sexual assault advisory group to provide legal and strategic advice to trial Crown attorneys, a mentorship program to Crown attorneys new to sexual assault prosecutions and a pilot program to provide free independent advice to victims of sexual violence who are proceeding toward criminal trial. Wynne also noted improvements to alternative streams: for one, the province will lift the two-year limitation period for civil sexual assault claims to the Criminal Injury Compensation Board—a change that recognizes victims of sexual assault often require longer than that to come forward.

Universities and campuses will also face new legislation: they will be required to adopt a sexual assault policy that has to be updated every four years, have clearly stated complaint procedures, and publicly report sexual assaults.

Wynne also spoke of shifting societal norms. To do this, she says, education about gender inequality, consent and healthy relationships is a keystone, one that dovetails with the new sex-ed curriculum covering Grades 1 to 12 that was unveiled by the Liberal government in February. “Seeding generational change” was crucial, she said, calling on parents and teachers for back-up. The province’s first female premier also recognized that change takes time, noting today that the discussion is an ongoing one at the government level, one that will include continuing consultation and an all-party committee.

“It’s Never Okay,” announced two days before International Women’s Day, is focused on women being the victims of sexual assault, with men the perpetrators, reflected in the public service announcement taglines:  “When you do nothing you’re helping him” and “When you do something you’re helping her.” Statistics show this is true, with women under 35 being the most vulnerable. But men too are victims of sexualized violence, and have even more limited resources available to them, something I asked the premier about in this interview.

This story was originally published on Macleans.ca.