As a woman in a male kitchen, I put up with abuse to fit in

When Chatelaine food director Claire Tansey started working in restaurant kitchens 20 years ago, harassment and abuse were just part of the job. Unfortunately, not much has changed. 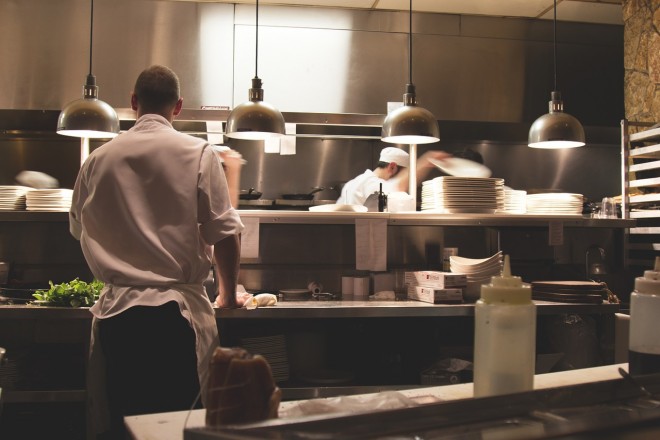 I never bend at the waist when getting something out of a low cupboard in my kitchen. I crouch. Twenty years ago, I started cooking in restaurant kitchens, and quickly learned that bending at the waist meant another cook would grab me from behind and dry-hump me. So I started crouching. Clearly, it has stayed with me. At the time it seemed normal, part of the exciting restaurant kitchen culture I was thrilled to be a part of. When other cooks (always male) deliberately brushed their arms again my breasts while passing me order chits or patted my bum as they walked by, I took it as a compliment: I had been accepted into their tribe. Sexual harassment was never on my radar.

As a woman in a male kitchen, I had to prove myself every day. The men didn’t think I could debone ducks (too technical), unload the produce order (too heavy) or season sauces (too important). Of course I was anxious to prove them wrong. But I was also 22 and happy to accept all kinds of abuse in the name of “earning my stripes.” At the time I didn’t know any other women in the business, but I saw various forms of corruption at every turn — sommeliers taking cases of wine home, waiters doing lines of coke off the dessert station — so it never occurred to me to think twice about the abuse I experienced every day. The guys who harassed me weren’t evil or malicious; they were just behaving like idiots and no one, myself included, called them on it. I’m a bit sick now about never saying anything. Because let me be clear: This was, and is, so wrong.

And, unfortunately, not a lot has changed in 20 years. This week, the Toronto Star’s Michele Henry reported that pastry chef Kate Burnham has filed an application to Ontario’s Human Rights Tribunal, alleging that she was routinely sexually harassed and abused while working in the kitchen at downtown Toronto restaurant Weslodge. Burnham’s description sounds worse than anything I ever experienced, but it rings true to me. I meet lots of young women cooks who have had similar experiences to mine; they always chalk it up to “doing their time” or “paying their dues.” Shockingly, women in restaurant kitchens continue to be harassed and abused.

In 2000, Anthony Bourdain’s Kitchen Confidential exposed the “dark underbelly” of restaurant kitchens, and the public was titillated by his tales of the rough, raw, wild lifestyle of New York cooks and chefs. But since Henry’s piece in The Star came out this weekend, there has been a kind of shocked silence in the industry. The real dark underbelly has been revealed, and no one wants to talk about it. Maybe chefs who have been boasting about their farm-to-table local meat or sustainable seafood are now looking in the mirror and realizing they have been mistreating (or willfully ignoring) the human beings right under their noses.

After my first cooking job, I moved around a lot, got harassed by a lot of co-workers and bosses, then ended up in a great kitchen of strong women in Guelph, Ont., before leaving the industry. I still think back on my restaurant days with affection, but I’m going to go home today and try to learn to bend at the waist.