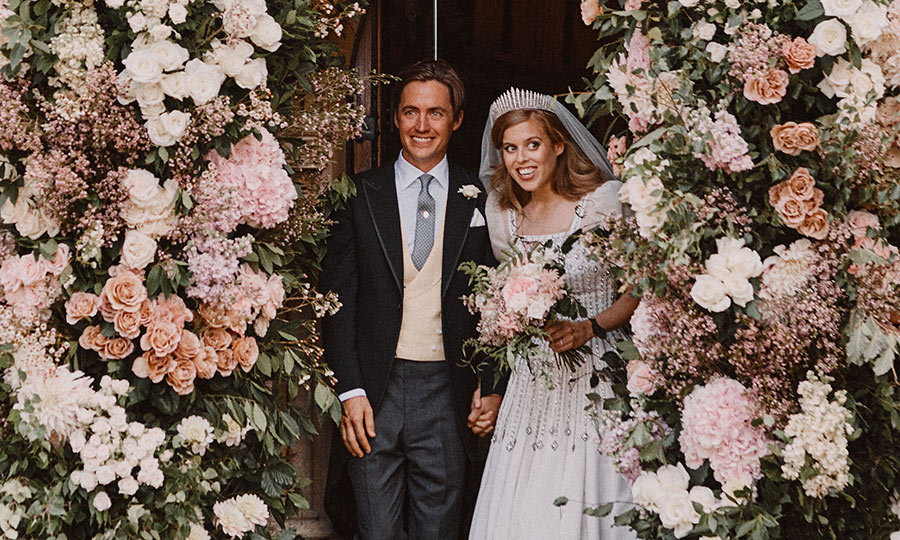 Princess Beatrice was a absolutely beautiful bride at her private wedding to Edoardo Mapelli Mozzi. The elder Princess of York got married on July 17 in a head-turning, vintage gown by Norman Hartnell.

The bride and her 36-year-old beau got married in a private ceremony at All Saints Chapel in Great Windsor Park.

In a touching gesture, the Queen loaned her the gown, which is made from Peau De Soie taffeta in shades of ivory, trimmed with ivory Duchess satin and fitted with organza sleeves. It is also encrusted with diamanté. 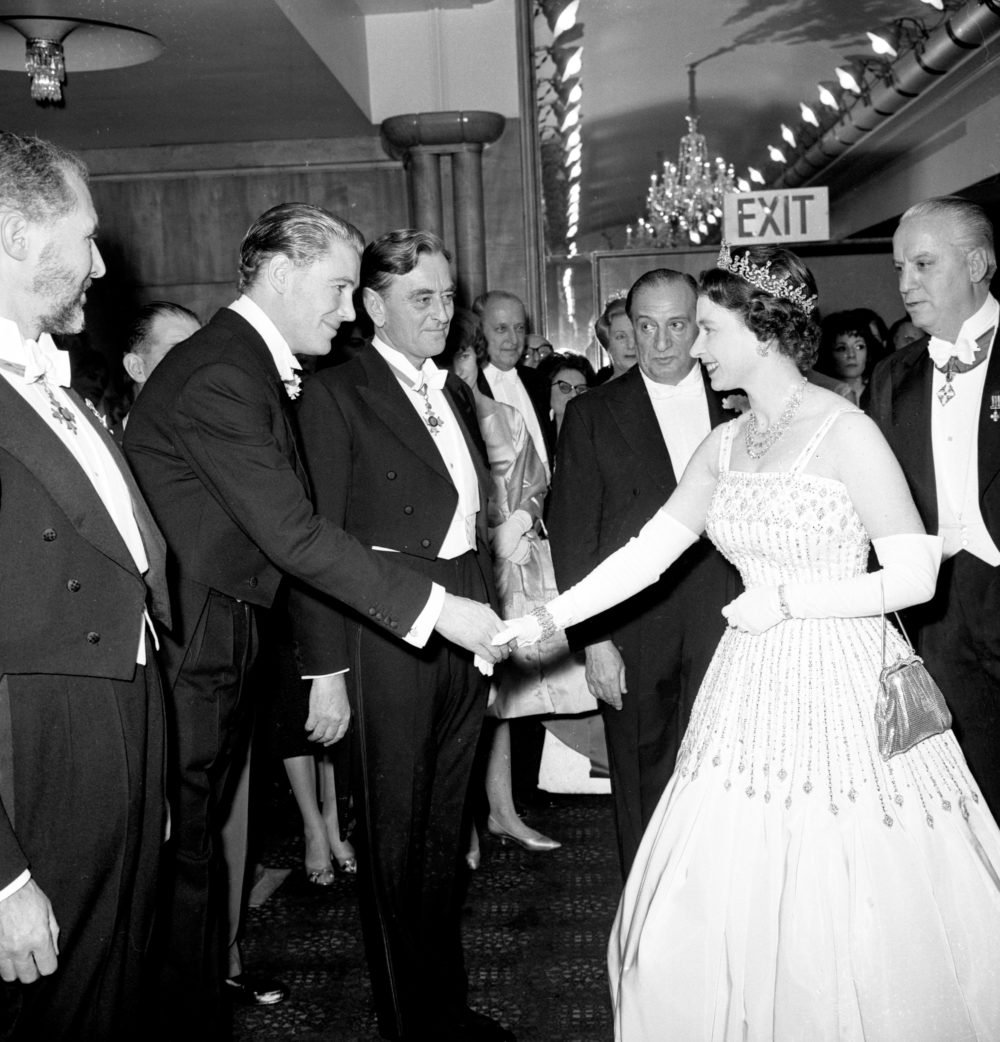 Queen Elizabeth II, in a white silk faille gown, shakes hands with Peter O’Toole when she meets him and other personalities before the world charity premiere of “Lawrence of Arabia’ at the Odeon, Leicester Square, London, in 1962 (Photo: PA Images via Getty Images)

Angela Kelly and Stewart Parvin, the Queen’s go-to designers and dressers, remodelled and refitted the dress specifically for Beatrice’s wedding.

We also know the soon-to-be 32-year-old wore a tiara to her nuptials. The Queen loaned her the Queen Mary diamond fringe tiara, which Her Majesty also wore the day she married Prince Philip in 1947. The tiara dates from 1919, and was created for Queen Mary, Her Majesty’s grandmother. It was fashioned from a diamond necklace given to Queen Victoria for her own wedding to Prince Albert in 1840.

As for the bride’s bouquet, we know she was carrying trailing jasmine, pink and cream sweet peas, royal porcelain ivory spray roses, pink o’hare garden roses and pink wax flower and baby pink astilbe. Her bouquet also included myrtle sprigs, as is royal wedding tradition. The selection was assembled by Patrice Van Helden, who co-owns RVH Floral Design. Following her nuptials, the bouquet will be placed on the tomb of the Unknown Warrior at Westminster Abbey.

Couldn't Bea happier (get it) 🐝… ⁣ ⁣ What a complete joy and privilege to watch you, my beautiful big sister, walk down the aisle to dear Edo. I am so proud of you and I'm so excited to support you in the next chapter of your life. We are going to have so much fun together. ⁣ ⁣ Happy wedding day to you both xxxx

The wedding is said to have had around 20 guests, reportedly including her parents, Sarah Ferguson and Prince Andrew, grandparents the Queen and Phil and younger sister Princess Eugenie and her husband Jack Brooksbank.

Edoardo’s parents, Nicola Williams-Ellis and Alessandro Mapelli-Mozzi, were also in attendance. Christopher Woolf, Edoardo’s son from his previous relationship with architect Dara Huang, was also there. The little boy, who goes by Wolfie, was his father’s best man and pageboy.

The wedding followed strict COVID-19 protocols and had social distancing measures in place. 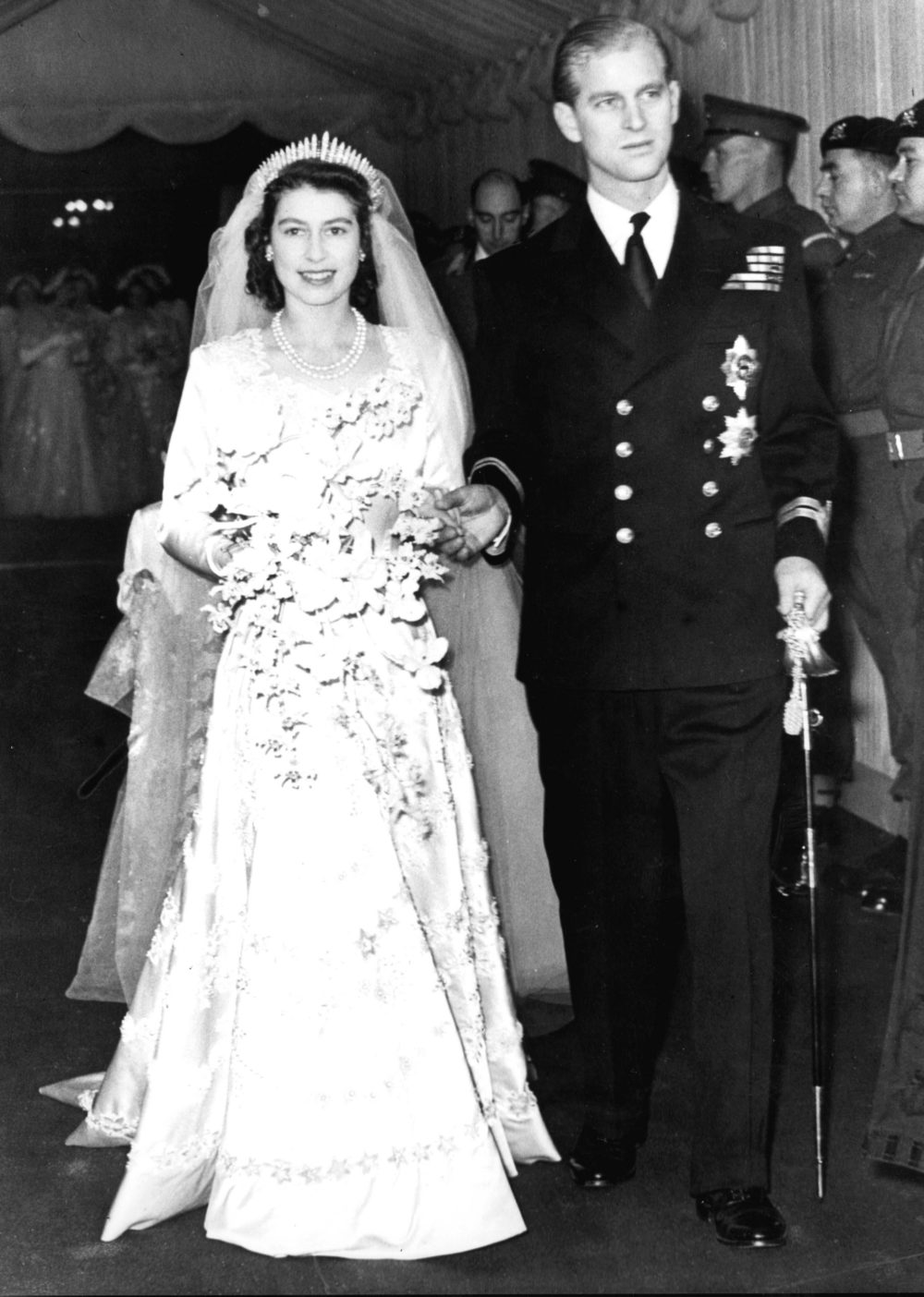 The Queen and Philip at their 1947 wedding. The Queen wears the same tiara as Beatrice. (Photo: PA Images via Getty Images)

The couple announced their engagement in September 2019. Edoardo proposed with a bespoke ring designed by Mayfair atelier Shaun Leane during a trip to Italy.

Beatrice and Edoardo had originally planned to marry at The Chapel Royal in St. James’s Palace on May 29, 2020 but the coronavirus and lockdown measures made them cancel those plans.

Congratulations to HRH Princess Beatrice and Mr Edoardo Mapelli Mozzi! The couple were married in a small private ceremony at the Royal Chapel of All Saints at Royal Lodge, Windsor on Friday 17th July. . Princess Beatrice and Mr Edoardo Mapelli Mozzi celebrated their wedding with their closest family.‬ . The happy couple are pictured with Her Majesty The Queen and The Duke of Edinburgh. . Princess Beatrice wore a vintage dress by Norman Hartnell and the Queen Mary diamond fringe tiara, both belonging to Her Majesty The Queen. The tiara was worn by Her Majesty on her wedding day in 1947. . Photograph by Benjamin Wheeler.