On realizing he'd been caught, Harry shot the camera a smile before rejoining the group of women who had cooked the mouthwatering meal. 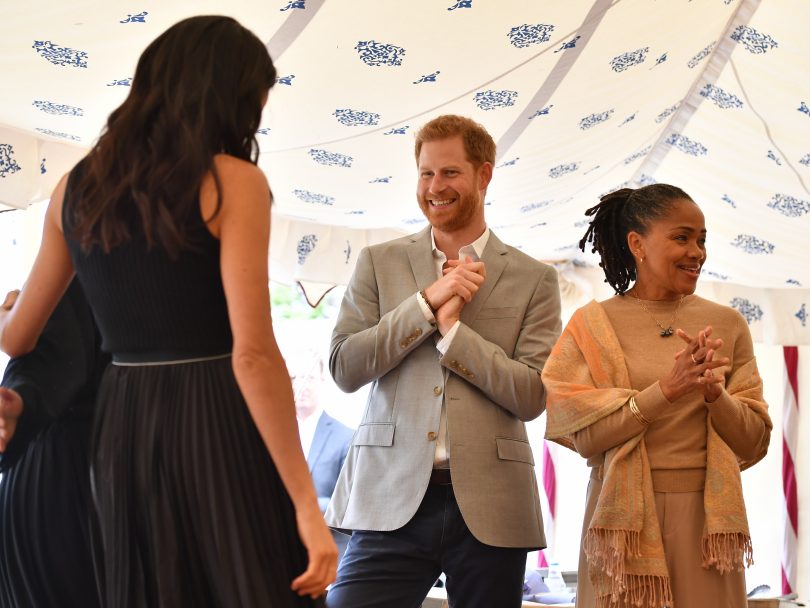 Prince Harry kept to the background at his wife Meghan Markle’s first charity launch, a tented fete on the grounds of Kensington Palace on Thursday, though he was visibly beaming with pride. The party was in support of Together: Our Community Cookbook, a book she helped produce with women affected by the Grenfell Tower fire and for which she wrote the foreword.

In the sweet video, the Duke and Duchess of Sussex and her mom Doria Ragland are among a group of women from the Hubb Community Kitchen preparing to take a group photo. Along comes the wind, which sends the former actress’s hair straight up and into her husband’s face. “Sorry,” she laughs as he takes both hands and smooths down her hair with a smile. If that wasn’t cute enough, the 34-year-old then rests his chin gingerly on his wife’s shoulder.

Harry was surely filled with emotion as he took in the culmination of his partner’s passion project. A self-proclaimed foodie, Markle started working with these women on moving to London and the result is a beautiful publication that will help keep their community kitchen up and running. During her three-minute speech, for which she didn’t have any notes, the duchess said, “I said in the foreword that this is more than a cookbook, and what I mean by that is the power of food is more than just the meal itself. It’s the story behind it.” She added, “That’s what we’re talking about in terms of coming together to really engage and talk and to be able to celebrate what connects us rather than what divides us. That, I believe, is the ethos of Together.”

Between moments of great pride (and hair tending), the Queen’s grandson lived up to his cheeky reputation. Another cute moment caught on film by ITV journalist Chris Ship saw the duke lingering by a table of food as he absconded with a few samosas behind his back. On realizing he’d been caught, he shot the camera a smile before rejoining the group of women who had cooked the meal.

I could be wrong but I reckon we’ve caught Prince Harry red handed stealing some samosas from the Meghan’s ‘Together’ cookbook event they were at today!! Have a watch… #HubbCommunityKitchen @KensingtonRoyal pic.twitter.com/3BWd0TYqj8

Prince Harry and Meghan are kicking off a very busy fall season — including a two-week tour of Australia, New Zealand, Fiji and the Kingdom of Tonga and time spent with athletes at his beloved Invictus Games in Sydney.