What it's like to give birth as a woman with a physical disability. 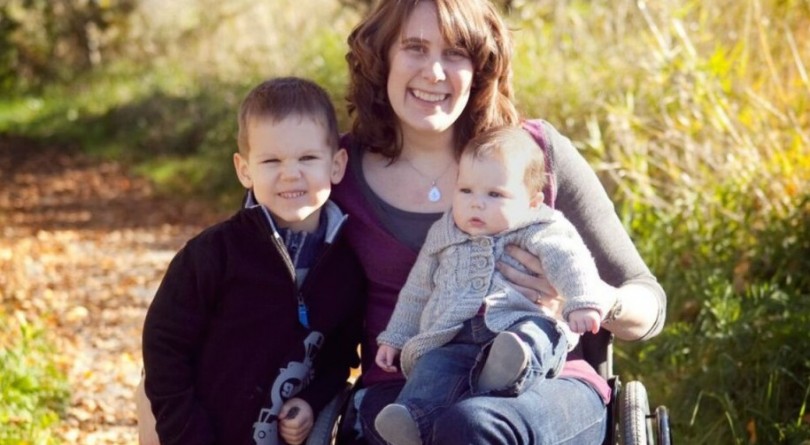 It has been seven years since Karen Hodge first became a mother, but she still gets nosy questions from strangers. “People will approach me and my kids on the street and ask if they are my children and if I had them naturally,” says Hodge. “In my better moments, I’ll usually try to see it as a teaching opportunity and respond with humour.”

The Port Moody, B.C., mom of seven-year-old Colin and four-year-old Laura has a spinal cord injury and has used a wheelchair since she was 15 years old. By now she is used to acknowledging as politely as possible that yes, these are her biological children, and yes, she had two vaginal births.

Hodge reminds herself that some people just don’t realize it’s possible for women with spinal cord injuries (and other physical disabilities) to get pregnant and give birth. Back in 2007, when she and her husband first started talking about having kids, even she wasn’t sure if it was possible.

At a time when women without physical disabilities can take for granted that answers to even the most obscure question about their bodies during pregnancy and birth are only a Google search away, for women with physical disabilities, it can be difficult to find reliable, evidence-based information specific enough to their case to be useful. 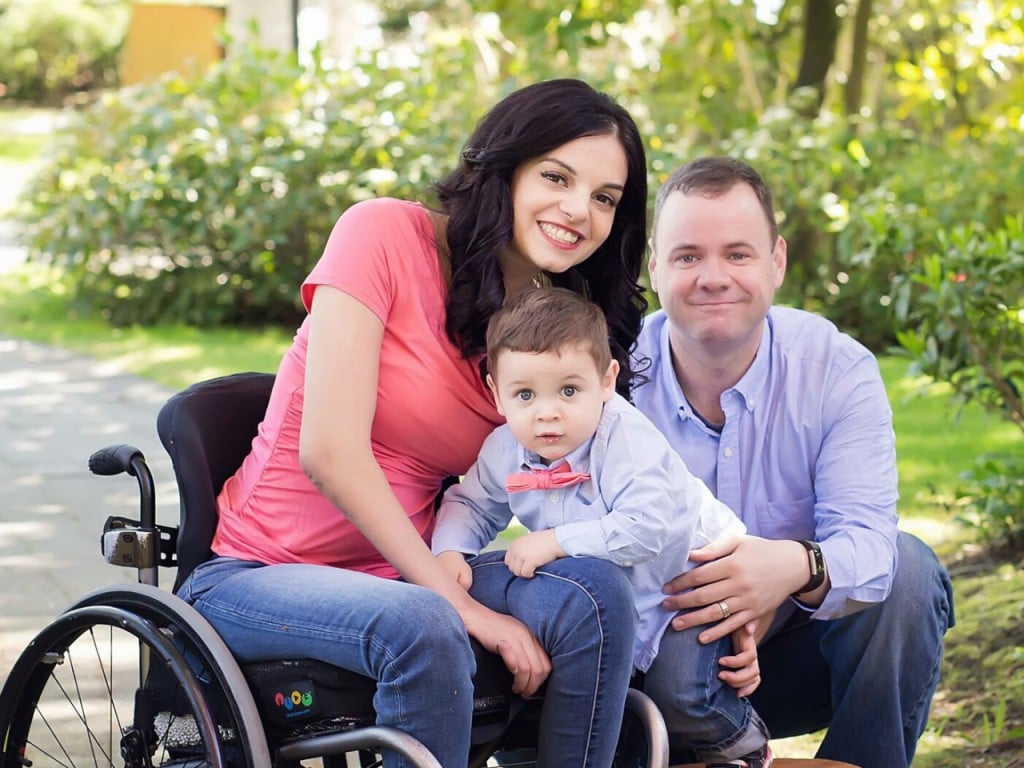 Many of the women Tarasoff spoke to had encountered healthcare workers unable or lacking in the knowledge required to adapt to their needs. Even if they were able to find a knowledgeable and supportive doctor, women reported having to field insensitive comments from other staff they encountered during their pregnancy. In a paper published in Disability and Health Journal, Tarasoff recounts the story of one mother of three, who has cerebral palsy and had to deal with a receptionist in her obstetrician’s office who openly expressed disbelief that she was there for a prenatal appointment. Then, when she was in the hospital recovering from birth and asked for help to get out of bed to use the washroom, the head nurse gave her a lecture and asked her, “How the heck are you going to take care of a baby?”

Some women with physical disabilities report having had to deal with insensitive comments from neighbours, co-workers, and even friends and family. Yasaman Best, a Vancouver mom with a spinal cord injury who gave birth to her son, Alex, in June 2015, says she was shocked when a close friend told her she thought it was “unethical” for people who use wheelchairs to have babies.

After a car accident in 2002, Best no longer has use of her legs, but has full use of her arms — although she struggles with some fine-motor tasks. During her pregnancy, she was surprised and thrilled to discover that she could feel the kicks and movement of her baby. And despite her initial concerns that she might not know she was going into labour if she didn’t feel the early contractions, her water broke at 37 weeks. “At first I thought maybe it was my catheter leaking again,” says Best, who had dealt with a UTI a few weeks earlier, “but my doctor said ‘No, he’s coming!’”

Alex was born healthy and strong with the help of forceps at the end, when Best had some difficulty pushing. “I remember he came out with his eyes wide open, looking right at me,” says Best, “It was the best moment.”

Best says the care she received at B.C. Women’s Hospital was “amazing.” Even before she tried to conceive, doctors answered all her questions about potential complications and provided her with an information booklet specific to pregnancy and birth for women with spinal cord injuries.

Karen Hodge, a paediatric social worker, is partly responsible for that booklet. After her kids were born, Hodge made it her personal mission to improve access to the latest information about pregnancy and birth for women with spinal cord injuries. In 2013, she brought together doctors, nurses and researchers with expertise in the field to create a research and advocacy group that has led workshops for healthcare providers and created education materials for patients — including the booklet Best received. Hodge says the idea was to create something women could download and share with their doctors, “so they could at least point them in the right direction.”

Such initiatives help women with disabilities know what to expect when expecting, but once they’re pregnant and visiting the hospital for regular check-ups, many still face physical barriers to accessing care. Women Tarasoff spoke to for her study reported attending obstetric appointments on floors without accessible bathrooms and having to give birth in delivery rooms without accessible showers or beds. Internal exams and ultrasound scans can also be challenging in facilities that don’t have lifts or examination tables that lower enough to allow women with limited mobility to transfer onto them from a wheelchair.

As an obstetrician specializing in high-risk pregnancies at Sunnybrook Health Sciences Centre in Toronto, Anne Berndl saw firsthand what a struggle it could be for her patients. So she created a dedicated clinic to provide specialized care to women with physical disabilities.

The Accessible Care Pregnancy Clinic opened in March 2017 at Sunnybrook and is the first of its kind in North America. “We focus on providing evidence-based, individualized care,” says Berndl, who hopes the clinic will also help to “reduce prejudice and normalize the idea of women with physical disabilities as parents.”

How Easy Is It (Really) To Get Pregnant After 40?

The clinic has a fully accessible delivery room, with a wheel-in shower, room for a wheelchair to maneuver, and space for a lift and dialysis machine. The beds and examination tables go lower than standard ones, and the clinic now has a wheelchair-accessible scale. “Before we had this scale, many women just weren’t being weighed at all during their prenatal visits,” says Berndl.

Sameera Khatib, who is in charge of ultrasounds for the accessible clinic, admits her team is still learning as it goes. She has figured out how to do some types of ultrasounds without moving women from their wheelchairs and has learned that one of the most important things she can do is listen to the patients, who usually know very well what will and won’t work for them. Khatib says one of the challenges she and her colleagues still haven’t quite figured out is how to do trans-vaginal ultrasounds and internal exams with women who can’t bend their knees or put their feet in standard stirrups. “For now, we have a staff member or partner support their legs,” she says. “But we are working on getting a new modified leg support to adapt the table.”

As of July 2017, there had been two babies born to patients of the clinic. One of them was Nurin Maknojiya’s son, Aariz, who was born by caesarean section on May 2. Maknojiya has scoliosis — a curved spine — and had surgery as a child to have a rod put in her spine. She experiences back pain and sciatica (pain that follows the path of the sciatic nerve, radiating from the lower back or buttocks and down the leg). As Maknojiya’s belly grew during pregnancy, her sciatica intensified, to the point where she could no longer sleep lying down and had to sleep at a 45-degree angle for most of her pregnancy. 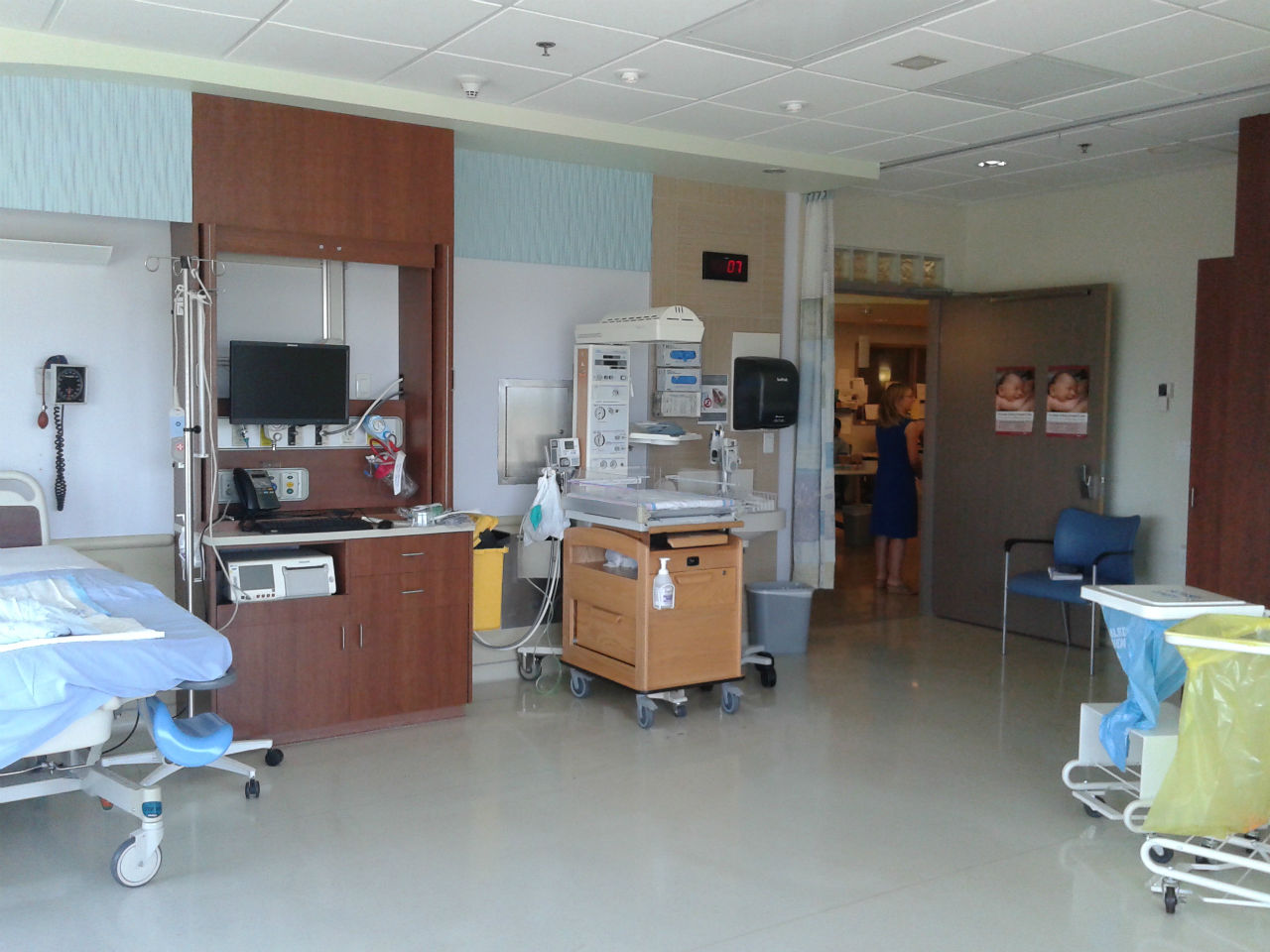 The Accessible Care Pregnancy Clinic opened in March 2017 at Sunnybrook and is the first of its kind in North America.(Photo, Kalli Anderson)

“They were very gentle with me at the clinic, and Dr. Berndl seemed to really empathize with my situation” says Maknojiya. Staff offered her wheelchairs or a cane to help her get around and took into account her concerns about being able to keep her legs bent during a vaginal birth when they made the decision to schedule a C-section. “I had always been afraid of having a baby,” says Maknojiya. “So, it was an amazing feeling when he was born, to see that I had created this beautiful, healthy baby boy.”

When Maknojiya first went home from the hospital, she had difficulty walking, and she relied on her husband and other family members to do a lot of the physical work of caring for Aariz. Berndl says that giving women more support to help them with the transition to parenting at home is at the top of her wishlist for the future of the clinic. “I’d love an occupational therapist and physical therapist to be part of our team and be able to do in-house assessments,” says Berndl, who also has plans to set-up peer support groups.

When she first went home from the hospital with Alex, Best says the occupational therapist and physical therapist who consulted with her were “life-savers.” The occupational therapist helped design an accessible crib that fits her wheelchair wheels underneath and opens from the front and a simple changing station on the couch, so Best could change diapers sitting in her wheelchair. Best’s reduced fine motor control in her hands made snaps on baby clothes and clips on baby carriers next to impossible, so the physical therapist replaced them with Velcro.

Karen Hodge says she remembers feeling overwhelmed when she first got home from the hospital with her eldest. “I felt this pressure that I already felt judged as a mom with a spinal cord injury,” she says. So when she was becoming anxious and having a hard time trying to breastfeed, “I felt like I wasn’t allowed to say it was too hard, that I was struggling.” After her second birth, Hodge hired a post-partum doula and had frank discussions, before she gave birth, about what kinds of support she would need most.

Best says she thinks the best thing anyone can do to help a new mom with a physical disability is to ask her what kind of help she needs. “I don’t like it when people assume I can’t do things and just jump in and do the work for me,” says Best. “It’s fine to be helpful and encouraging, but I need them to recognize that I know what I’m doing with Alex — I’m his mom.”