What you missed at the second, very fiery leaders debate

All the highlights and low blows. 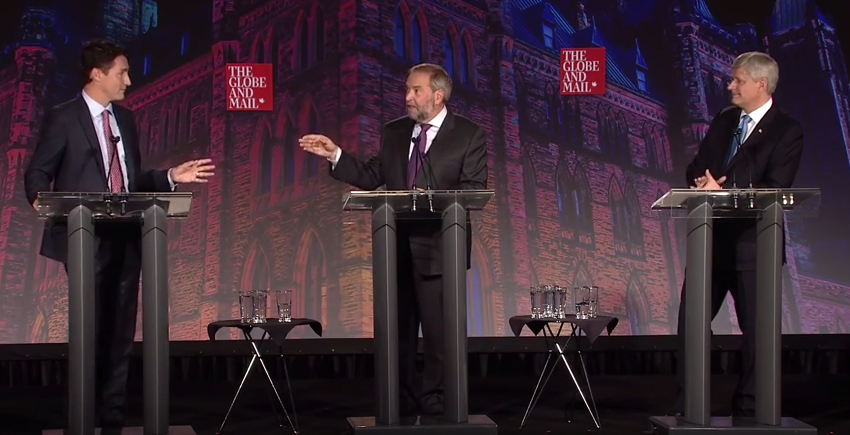 A typical scene from the Globe Debate.

We’re now more than halfway through the longest election campaign in our country’s history. (Are you excited? Because we are excited.) Last night, the second in a series of debates between the federal leaders was held in Calgary’s Stampede Park, hosted by The Globe and Mail and moderated by the paper’s editor-in-chief, David Walmsley. The issue at hand? The economy. Alberta was an appropriate setting for a discussion on Canada’s purse strings, given that lagging oil prices have been at the centre of the are-we-or-are-we-not-in-a-recession argument between party leaders.

Emphasis on argument — whether or not you find job growth and tax credits to be riveting stuff, there were plenty of quality zingers, fact-checks and downright shout-y exchanges between Trudeau, Mulcair and Harper last night. (We would have suggested the use of a “talking stick” rather than an egg timer to prevent interruptions had we been on-site.) Aside from the occasionally unwieldy conversation, here are the night’s highlights. 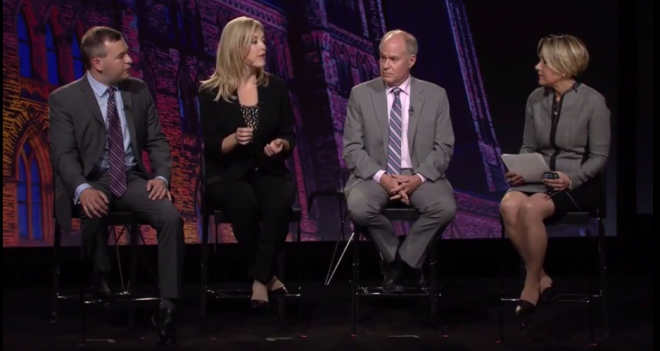 Some viewers were thrown off when, at 8:00 p.m. EST, the Globe Debate opened with a 15-minute panel discussion among Globe journalists instead of getting right into the fray with Mulcair, Trudeau and Harper. Naturally, snark ensued:

Credit where due. This pre debate is very interesting. Insightful commentary from all the panelists. No real spin. #GlobeDebate — Naheed Nenshi (@nenshi) September 18, 2015

Spoke too soon. The panel has now gotten into horse-race and handicapping. Boring. Let’s stick to real policy differences. #GlobeDebate

Despite not having been invited to formally participate in the debate, the Green Party leader live-tweeted her responses to Mulcair, Harper and Trudeau all debate long, in addition to providing swift video fact-checks to the leaders’ many trade, job and climate claims. She also made use of the hashtag #glibandmale to flick at the debate’s no-girls-allowed lineup: 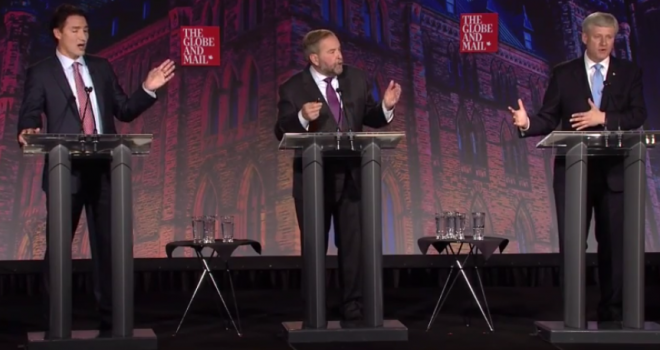 What the leaders have to say can be as important as how they say it. As Paul Wells, who hosted the Maclean’s debate, put it, most voters watch the debate for “confidence, body language, a serious attitude.” And serious attitude there was! Trudeau was the most, shall we say, impassioned — yelling, interrupting and even giving moderator Walmsley a burst: “Refugees are about the economy, David!” At other times, he seemed overly rehearsed —  when he stumbled over his words, it felt like a director might jump onstage and yell, “Cut! Let’s try this ONE MORE TIME.” Mulcair … talked … very … slowly. But he was in sharper form than in the previous debate, throwing out stats, quips and insults (“With friends like Stephen Harper, Alberta doesn’t need enemies”). And Harper, who kept an even keel throughout most of the debate, was the only leader who sounded relaxed and unscripted, which was a good thing. The subtext: “I’m better than these bozos.”

Between the arguing and interruptions, the leaders managed to underline their economic strategies. Harper: no deficit, stability. Mulcair: no deficit, social programs. Trudeau: modest deficit, investment in Canada. Harper painted a picture of a “fragile” and “unstable” economy that needs protection and an experienced hand — not higher taxes, like Mulcair’s proposal to raise corporate tax rates, or a deficit, which Trudeau says is necessary to invest in infrastructure. “Running a deficit is not the kind of protection our economy needs right now,” said Harper. In other words, “These guys don’t know what they’re doing. Stick with me, kids.” (Which is pretty much what he told us during our interview.) Mulcair worked hard to show that he can deliver “social programs on a solid footing and that includes balanced budget.” And Trudeau aggressively argued that his optimistic plan would kickstart the economy and benefit the middle class.

The economy was the focus of the night’s debate, but that didn’t stop the party leaders from occasionally deviating from the country’s finances. In the “Energy and Environment” portion of the evening, Mulcair and Trudeau took turns discussing Canada’s ecological legacy, each referencing the “debts [built] on the backs of future generations,” and the “future we are leaving to our kids.” Student debt, child care, the refugee crisis and even Bill C-51 got airtime, proving that the leaders view the country’s finances as a more nuanced issue than pure dollars and cents.

Liberal leader Justin Trudeau — who could not seem to catch his breath all night — issued a takedown of Tom Mulcair’s child-care promises, calling them “puffs of smoke.” Mulcair quickly unloaded a semi-childish zinger: “You know a little about that, don’t you, Justin.” (That was a jab at Trudeau’s admission that he has, in fact, smoked up since becoming an MP. Trudeau has also pledged to legalize the drug if elected.)

Later, disputing the Conservative government’s cuts to refugee health plans, Stephen Harper called his policy one that new and “old-stock Canadians agree with.” Twitter users immediately questioned Harper’s use of the phrase; some compared it to the controversial term pur laine, which refers to individuals whose ancestry is strictly French Canadian.

7. One explicit mention of women.

Talking about Canada’s affordable child-care conundrum, Mulcair was the only debate participant to single out the career challenges faced by working women. Said Mulcair, “It is almost always women who make tough sacrifices in their career.” May took notice.