5 things I learned as a Canadian volunteering for Hillary Clinton

On the eve of the U.S. election, I went door-to-door in Hillsborough County in the swing state of Florida. Here’s what happened. 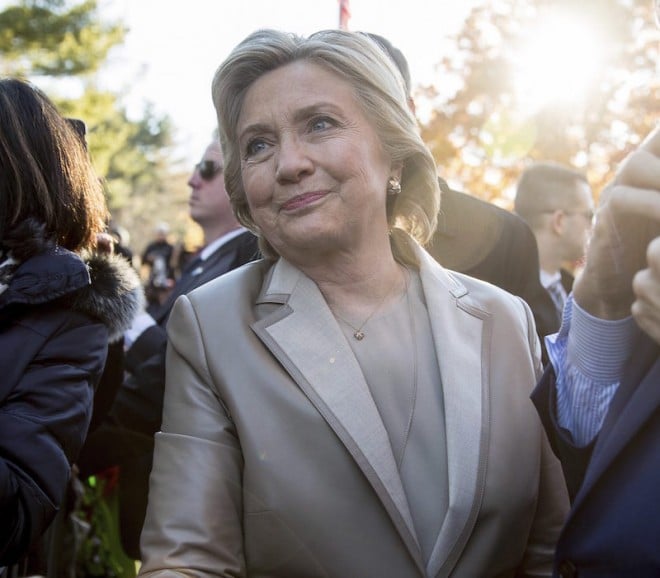 In the days leading up to the U.S. election, inspired by Hillary Clinton and terrified by the alternative, I spent time volunteering for the Democrats in Hillsborough County, Florida — one of the swing-iest parts of the swing-iest state. Here are five things that became abundantly clear to me as a Canadian on the trail.

I arrived in Florida thinking I’d look into volunteering for the HRC campaign, but it wasn’t long before I realized absolutely had to. It might have been the man – a dad, actually – we saw at the crab claw festival, sporting a “That Bitch is Crazy” t-shirt (this charming garment, which has HRC’s face in the middle of it, is also available in hoodie and v-neck style) that cinched the deal. Or maybe it was overhearing a group of 30-something male golfers having a “locker room”-style conversation, one that made the Donald Trump/Billy Bush exchange seem prudish by comparison. The highways near where we’re staying are decorated exclusively in Trump/Pence signs. The only Clinton sign among them was a homemade job that said, “Vote For Her . . Your Husband Will Never Know” (and it had been defaced by a super-clever vandal who scribbled “lezbo” across the bottom).

2. All volunteers are created equal

You might be thinking, “Wait, Canadians can volunteer in a U.S. election campaign?” The short answer is, yes, we absolutely can, as I quickly learned from Mike, a strawberry ginger from Wales who has been working out of Clinton’s Tampa HQ for two weeks and was happy to show some fellow foreigners the ropes. Not five minutes in the door, Mike was leading us through a brief training session, explaining that our role in this operation was simply to get out the vote. This meant knocking on the doors of democratically inclined households and informing people of where their voting stations were, what they needed to bring and when to go.

3. Canvassing: There’s no app for that

Blame seven seasons of The Good Wife, but my image of what a Clinton office would look like was way off. My expectations weren’t super fancy, more like a pared down version of the Facebook offices: some laptops, a wine fridge, maybe a few beanbag chairs. Instead, the large room looked like a disaster relief station (cases of water, stacks of paper, people talking urgently into phones). HQ wasn’t entirely without perks — we were offered pop and pizza before heading out — but the whole operation was surprisingly low-fi. As clipboard-carrying canvassers, we got a lists of street addresses and recorded the results of each visit in pen. The last time a Clinton ran for president the Internet had yet to enter our daily lives. Twenty years later, not much seems to have changed.

4. There is no “typical voter”

After several hours spent walking and knocking, I can report that central Floridians are fond of big dogs (Rottweilers and Dobermans were common), and post-seasonal Halloween decorations. Beyond that, the generalizations fall apart, and I had to confront my own stereotypes. There was an older white man who looked like he had jumped straight off a GOP pamphlet, who told us that no one in his house would be voting for anyone other than Hillary. There was a 40-something southerner who proudly identified herself as a “Yellow Dog Democrat” (a late 19th-century term that means you’d rather vote for a yellow dog than a Republican). Even some of the Rottweilers turned out to be slobbery softies. We did meet one man who fulfilled my own personal vision of a Trump supporter — sort of like a villain in a John Grisham novel. On the plus side: His girlfriend was still undecided.

Related: Chatelaine’s eerily accurate takes on Trump and Clinton — from 25 years ago

5. Taking part is the best part

Watching HRC preach “Stronger together,” or M-Obama deliver her famous “We go high” speech, it’s easy to get swept up in the poetry of election season. Going door-to-door in Hillsborough County, the reality became much more clear. Of the hundred or so doors we visited, we ticked, “Not home” or “Vacant” for at least half. We saw dozens of eviction notices and foreclosure notices and mailboxes that hadn’t been emptied in weeks. As this piece in The Globe and Mail explains, Hillsborough is “a microcosm of a changing America, echoing the country as a whole in race and ethnicity, income, age and especially in politics,” having predicted 19 out of the last 20 presidential elections.

There was one man who answered the door holding his young daughter. He said he was still undecided. We told him we had come all the way from Canada because of how much we believed in the Democratic Party and Hillary Clinton’s vision for America. This would have been the time to launch into a Mr. Smith Goes to Florida-type speech, but my brain went blank and I reverted to our trusty script, asking the man if he knew where his voting station was. He said it was at the library and I told him that it was actually at the church. And then we left.

This is idealistic, but I hope our enthusiasm was able to penetrate his gruff exterior, and that he arrived at the proper location this morning and voted for Clinton. Or maybe he just stayed home and watched football. I’ll never know if our American walkabout made a difference, but when we dropped off our final packet and got the thumbs up from volunteers who have given so much more than a couple of days, we felt a part of something larger. And honestly, if all we did was convince one person to vote Clinton, to counteract “Crazy Bitch” t-shirt man’s vote, it was worth it.