Protest city: A diary of inauguration day in Washington

While Donald Trump was taking the oath of office, I wandered about the city talking to people and witnessing acts of resistance, big and small. 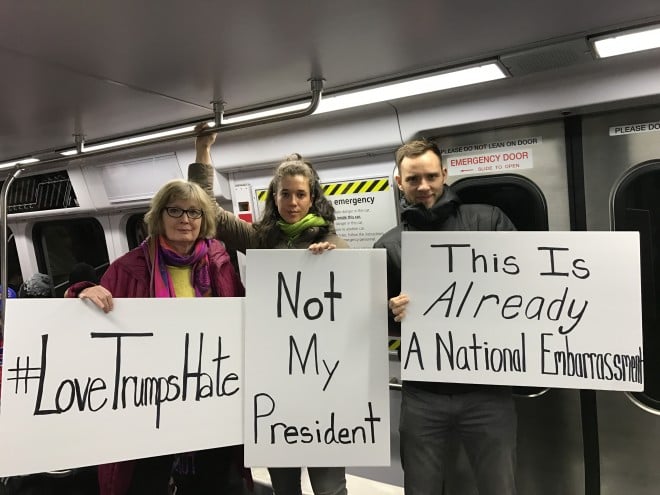 Lynn Holbein, with her son and daughter-in-law, on the way to Washington. Photo, Sadiya Ansari.

10 a.m.: Boarding the metro to make my way from Rockville, MD to Washington, I spot a woman with a “Love Trumps Hate” sign sitting next to a man wearing a “Make America Great Again” hat — the only two camps anyone seems to belong to in America these days.

Lynn Holbein — owner of the sign — travelled here from Boston to protest today, and participate in the Women’s March on Saturday. “We’re very scared about Donald Trump,” she says. She’s most worried about his access to the nuclear codes and his “tendency to stereotype immigrants and Muslims.”

She’s with her son, Chris, who tells me his father is a Republican and although he’s a not a fan of Trump, he’s a fiscal conservative who voted for him over Hillary Clinton. Chris tries to be empathetic to the other side of the aisle by consuming right-wing media, like the National Review and Fox News. “We have a duty to try to see other people’s worldview.” 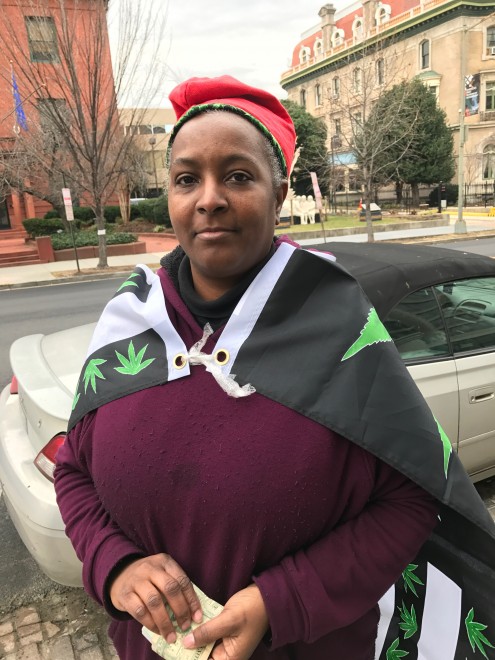 11 a.m.: I get off the metro at Dupont Circle Station, usually one of the busiest stations in Washington, but it was generally quiet. After walking for about five minutes, I stumble on a massive line of people running a few blocks long. It’s a line to get free marijuana.

Lisa Scott, 52, is a local involved with D.C. Marijuana Justice and says the group was giving out 9000 joints as a way to push Trump toward legalization. She is feeling pretty good about the day, but isn’t optimistic about a Trump-led America. “He chose Jeff Sessions [as attorney general] who is anti-marijuana and racist and likes to lock people up in jail, so we don’t want him to get confirmed. That would definitely not be in our favour.” 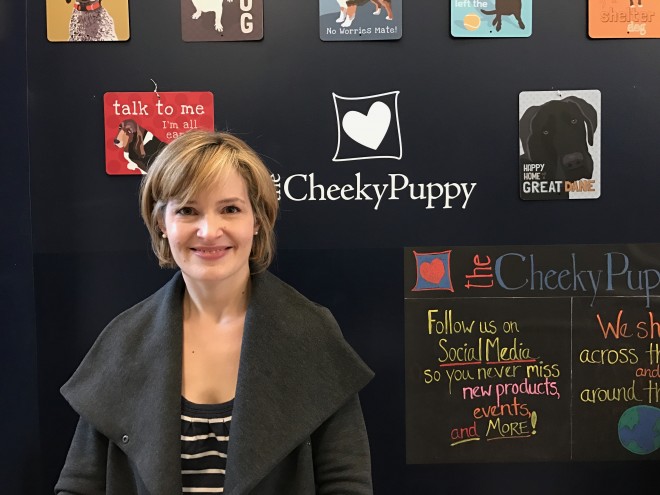 11:30 a.m.: I make my way to Massachusetts Avenue and meet Courtney Stamm, a small business owner, in line at Starbucks. When I ask her how she was feeling on inauguration day she says she isn’t sure if she wants to cry or vomit. “Part of it is sadness to see [Obama] go and just this pain of what’s to come,” she says.

She invites me across the street to her adorable pet accessory shop, The Cheeky Puppy, to chat a bit more. Stamm turned 40 on election day. She says she’s concerned with the Trump’s tendency to react quickly and act in ways that are deeply offensive to her, like his Twitter attacks on civil rights activist and Congressman John Lewis. It’s “the lack of basic civility and respect and sensible dialogues and conversations about things,” Stamm says. “How’s it going to get better when he’s demonstrated you can be like that and become the most powerful person in the country?” 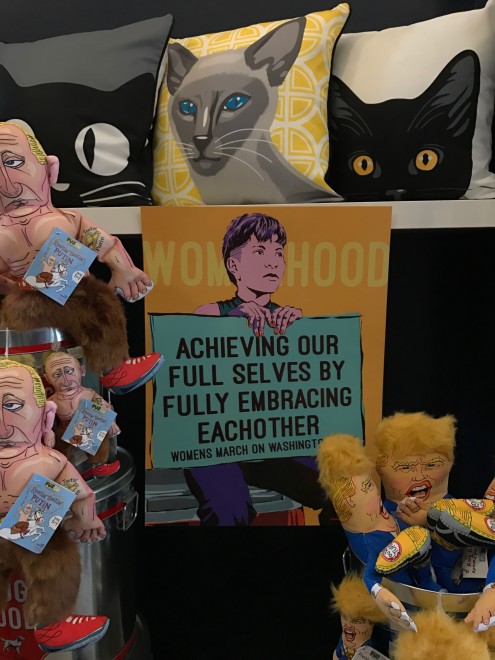 Stamm has lived in D.C. for 17 years but was raised in Dayton, Ohio. She always imagined she could move back if she wanted, but now she’s not sure — the gulf between what she sees as her values and those of the people who buoyed Trump to victory in her home state seems too wide.

She’s concerned about the erosion of progress when it comes to reproductive and LGBTQ rights and pay equity, but is trying to stay positive. “The inequality and horrors that happen to women daily, in so many places around the world, defies the imagination,” she says. “As upset as I am, being able to own my own business, to date a women, to buy my own apartment — it’s a place of deep privilege.” 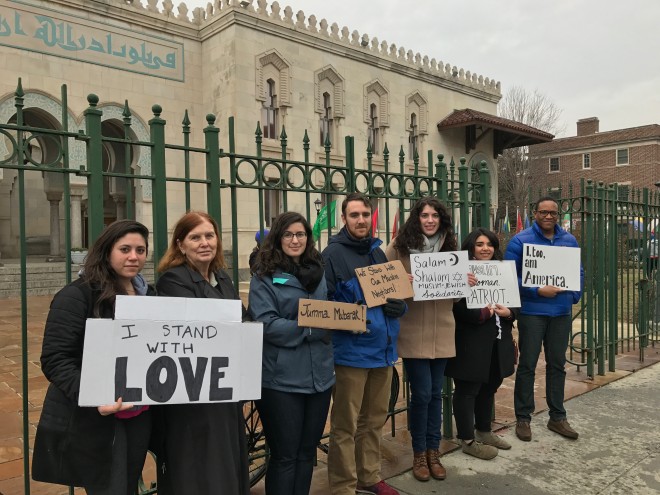 12:30 p.m.: My Uber pulls up to the Islamic Centre of Washington, a gorgeous building on Embassy Row. I see 10 or so people holding signs in front of the mosque that say “We stand with our Muslim neighbours” and “I stand with love.”

1:30 p.m.: I carry on, headed to the Canadian embassy, which is about three miles away, for their inauguration tailgate party. It’s the only embassy located on the route between the White House and Capitol Hill, and a great spot from which to watch the parade.

My driver is a 37-year-old Pakistani-American, Shazad Adam, who grew up in Arlington, VA. Adam casually tells me about a bunch of bikers he spotted with Confederate flags further down Embassy Row as we pass some more anti-Trump protestors — their signs ranged from respectful (“Protect rights for all”) to blunt (“F–k Trump”).

He’s not worried about America’s new president, but is concerned about the rhetoric his 8-year-old daughter has been exposed to as a result of Trump’s ugly campaign. She’s already come home telling him that she hates Trump because he’s racist. He thinks she’s just mimicking something she’s heard. “My wife and I just tell her we’re not better [than intolerant people] if we say things like that,” he says.

2:20 p.m.: The drive, which should have been 13 minutes long, is very slow going. Then, gridlock. Members of the National Guard start redirecting cars to other streets. We’re at a standstill near 14th and K streets when the anxiety-inducing sounds that have been running in the background all day converge: Low-flying helicopters, police sirens, stun grenades and tear gas have people running from a clash between protesters and police.

The centre of the chaos was two blocks away, at 12th and K Streets where a group of protesters had started smashing storefronts and bus stops.

2:55 p.m.: I hop out of the car to try my luck on foot, and end up on the parade route, where Trump fans and foes are mingling peacefully. I meet Anna Kasibhatia, a 19-year-old from Durham, NC. “I’m really passionate about protesting everything this administration stands for,” she says. She had some hateful comments hurled at her earlier in the day, but hadn’t witnessed or experienced any violence. 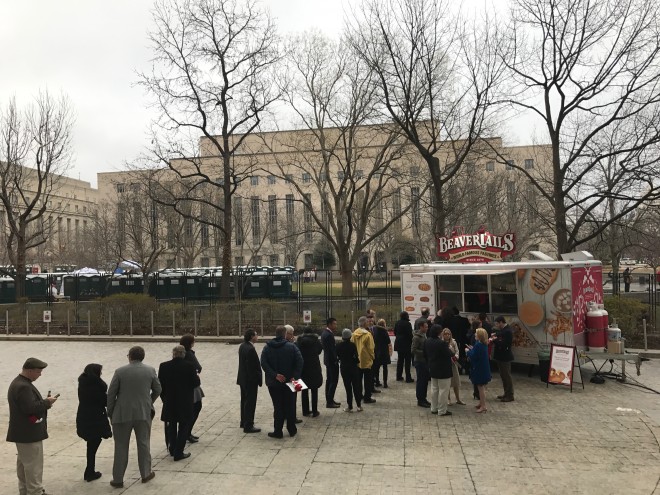 3:15 p.m.: I arrive at the embassy. Even though my day has been largely without incident, I feel a kind of relief to see a Canadian flag. I meet my friend, Gina Cosentino, who invited me to the embassy party as a guest. Like a true patriot, she promptly shows me the burger and poutine line. She’s lived in Washington for five years and was at this party four years ago when Obama was re-elected. She says the mood is sombre, comparatively. Cosentino is not only worried about how Trump’s election will affect her as a Washingtonian, but how it will affect the nature of her work in the international development sector.

“This is a president who is committing to dismantling the international cooperative system that was put together in the 1940s for the purposes of peace and shared prosperity,” she says. She thinks that this, in addition to not acknowledging climate change, will only lead to more conflict, and not the eradication of terrorism Trump promised in his inaugural speech. 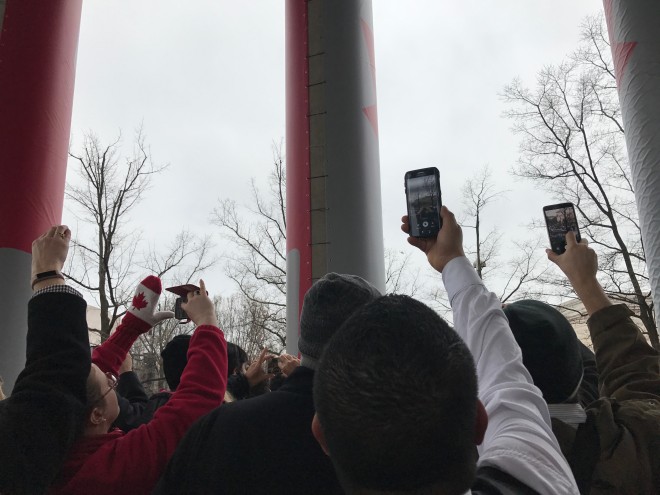 3:45 p.m.: I head outside to try to catch a glimpse of the parade, and maybe even the president himself. When his motorcade passes, there are a few cheers and a little bit of clapping. The crowd outside starts to thin after that, with guests grabbing a few last fries inside the embassy before leaving.

Rebecca Kutarna is interning with the embassy and has brought her mom, from Toronto, as her guest to watch the parade. Now that it’s over, she’s excited about Saturday: “You read about really historic female marches and all kind of marches on Washington, so I’m excited to be able to do that. And I’m excited I get to do it with my mom.”

5:00 pm: The streets are quiet as night starts to fall, and the train home is pretty empty, save for a few Trump supporters wearing “MAGA” hats. Two of them sit next to me at the back of a relatively empty car and it makes me feel … vigilant. I want to chat with them about their day, as I had talked to so many others, but something stops me. I’d like to say it was exhaustion, but the truth is, I felt uneasy. It’s hard to know what to make of Trump’s America.

Follow Chatelaine’s coverage of the Women’s March on Washington on Twitter and Facebook — we’ll be sharing live coverage from staffers Sarah Boesveld, Katie Underwood and Sadiya Ansari, who will be attending the march. Or follow them directly on Twitter: @sarahboesveld; @katieunderwrite; @sadiyaansari. Read our complete coverage here.

More:
What Donald Trump’s presidency means to me
How to read like Obama: 10 books beloved by the Bookworm-In-Chief
5 easy dinner recipes to make this week