Analysis: White Canadians must know this verdict deepens Indigenous peoples’ distrust in the system, which offers no justice to Colten Boushie. 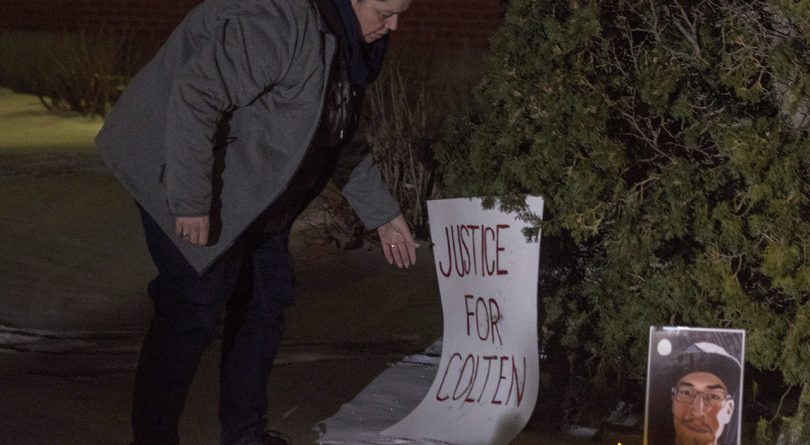 Michelle Stewart, a supporter of the Boushie family, looks at a sign and photo of Colten Boushie in front of the Court of Queen's Bench. Photo, Liam Richards/The Canadian Press.

It took 15 hours of deliberation, and in that time reconciliation with Indigenous peoples has taken a great leap backward. For many, the ruling in the Gerald Stanley trial suggests a terrifying reality, one where in the eyes of Canada’s justice system it is okay to shoot and kill an unarmed Indigenous man. Stanley, a farmer in rural Saskatchewan, has been found not guilty in the killing of Colten Boushie by a jury consisting entirely of white people in a high-profile case, whose outcome, far from serving justice, may now prove a breaking point in the already frayed thread of trust between Indigenous and non-Indigenous people.

Stanley was charged with second-degree murder in the death of Boushie, a 22-year-old Cree man from the Red Pheasant First Nation. For Boushie’s family and their supporters a conviction on that charge, or a downgrade to manslaughter was the best outcome they could hope for. An acquittal, of course, was the best that Stanley and his family could hope for. It all hung on what happened on the day Boushie was killed.

On Aug. 9, 2016, Boushie and four friends pulled up to Stanley’s farm in Biggar, Sask. They had spent the day drinking and swimming. On the drive home, Cassidy Cross-Whitstone, the driver of the group’s vehicle, punctured a tire and drove onto a farm, attempting to steal a truck. When that failed, the group came upon Stanley’s farm, where one of the men attempted to start an ATV on the property.

Stanley and his son, Sheldon, were outside working on a fence when the group pulled up. During his testimony, Sheldon said he chased a man off the ATV before smashing the vehicle’s windshield with a hammer as it tried to back out of the yard. With one tire shredded, the vehicle crashed into Stanley’s wife’s car and came to a halt. Stanley, meanwhile, testified that, fearing for the safety of his wife and son, he went into his shed to grab a semi-automatic handgun. He told court he didn’t remember how many shells he loaded into the magazine, and merely fired warning shots in the air as two of the men ran from the vehicle. Stanley insisted that he believed there to be no more shells in the magazine, pulling the trigger to make sure it was empty and removing the clip. 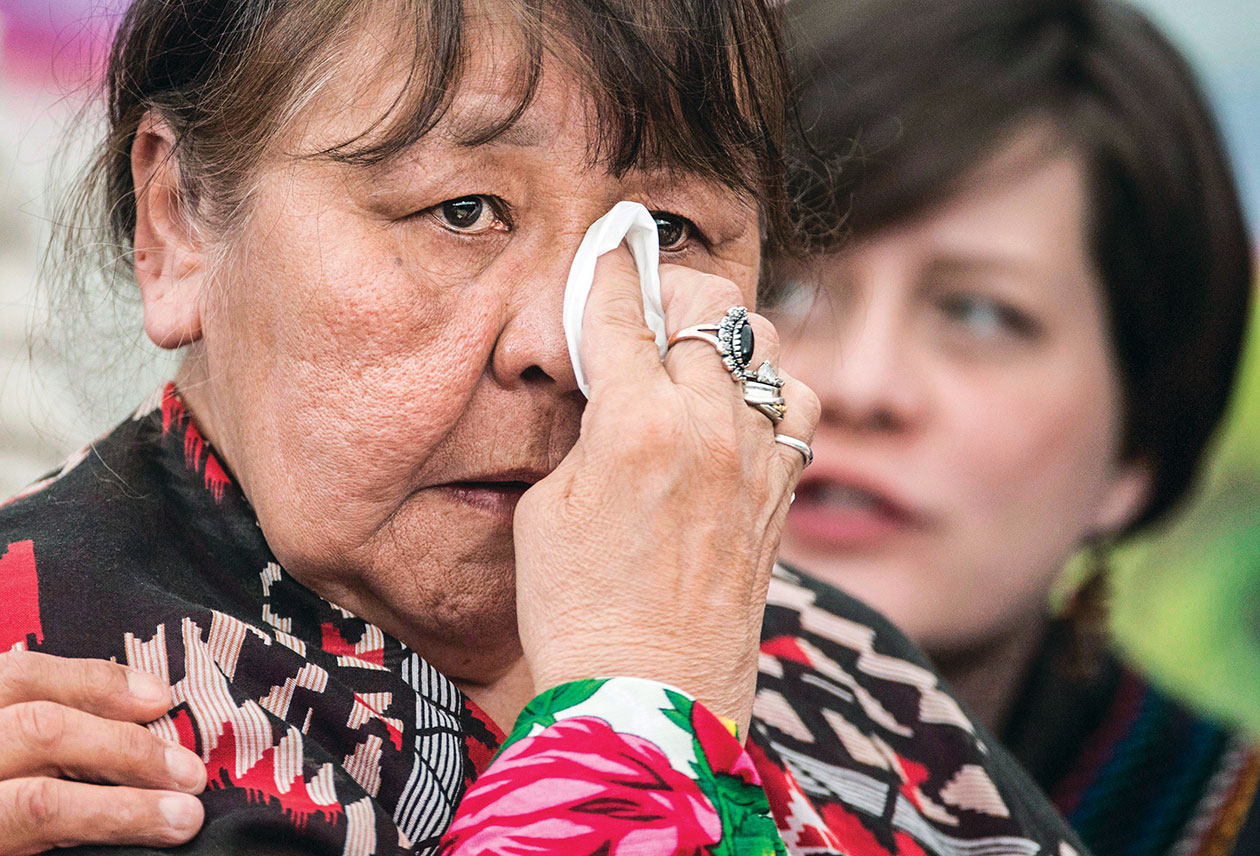 Boushie and two women remained in the vehicle. Sheldon had run toward the house, and when he came back outside, he recalled in testimony, his father was walking toward the vehicle before the shot that killed Boushie went off—a statement that contradicted Stanley’s story, who said he ran to the vehicle, fearing that his wife had been trapped underneath. In the final moments that led to Boushie’s untimely death, Stanley, with the gun in his right hand, intended to turn off the vehicle from the driver’s side window with his left. “Boom. This thing just went off,” he said of the shot to the head that killed Boushie.

Throughout the trial, Stanley’s lawyer, Scott Spencer, postulated that the killing was the result of a “hang fire”—a delay between the time the trigger is pulled and when the bullet leaves the gun. “It’s a tragedy, but it’s not criminal. You must acquit,” he told the jury. Spencer encouraged them to put themselves “in Gerry’s boots,” arguing that the actions of Boushie and his friends were to blame for the escalated violence. Yet the Crown’s firearms experts thoroughly refuted the hang fire claim, saying not only that hang fires are extremely rare, but the firing discrepancy is usually less than a second, and there was nothing wrong with Stanley’s gun. (For a sense of how thin this aspect of the defence was, consider that, at one point, the judge had to prevent Spencer from using a printout from an online Reddit conversation while questioning the firearms expert.)

It’s hard to overstate the insult this threadbare argument came to represent to Indigenous people, reinforcing their sense that the white justice system would somehow find a way to exonerate Stanley. In the months leading up to the trial, hate-filled and racist comments flooded social media, much of it in support of Stanley and the rights of farmers, forcing then-Saskatchewan premier Brad Wall to condemn the exchanges. In 2017, the Saskatchewan Association of Rural Municipalities had voted overwhelmingly to lobby for the right to protect one’s self and property—code, many First Nations people felt, for “shoot Indigenous trespassers.” The Stanley verdict seems to legitimize these sorts of ideas, which are not upheld by law, and are supposed to be antithetical to Canadian values.

When Canada looks back on the outcome of this trial—if it has the will to do so—it must question the absence of Indigenous people from the jury selection process: the very people who understand systemic racism in this part of the country the most, and where Indigenous people make up the vast majority of those incarcerated. Touching on the jury selection for the Stanley trial, University of Toronto professor Kent Roach wrote in the Globe and Mail: “Fair trials have to respect the equality rights of victims, as well as the rights of the accused. As the [Aboriginal Justice Inquiry] warned in 1991: ‘Both the Crown and defence counsel have too many opportunities, through the use of peremptory challenges … to make decisions on the basis of racist or sexist stereotypes.’”

But the warning signs in this case were there long before jury-selection. The RCMP failed Boushie by losing the vehicle he was killed in and neglecting to do a blood-splatter analysis that could have provided a better picture of what happened the moment he died. The Mounties waited a strangely long time to charge Stanley in the aftermath of the shooting. In the intervening period, the tone of public conversation in that part of Saskatchewan pointed to strong pro-Stanley sentiment within the mostly white communities the jurors would be chosen from. No matter how you dissect the case, Stanley was given virtually every advantage from the outset.

Put all this together, and you have a picture that for First Nations people in rural Canada is beyond discouraging: it’s downright frightening. An all-white jury believed Stanley’s side of the story, a narrative filled with holes, contradictions and details that were deemed outright impossible by experts on the stand. More than acquitting him of second-degree murder, the all-white jury decided, too, that Stanley was not guilty of manslaughter; that he was not culpable in any way in the death of Boushie; that he did not intentionally point his gun at him—this despite Chief Justice Martel Popescul stressing before deliberations that extreme recklessness is grounds for a finding of murder. The all-white jury’s acquittal implies that Stanley was justified in killing Boushie.

Is this an outcome Canadians accept?

They must know this is a verdict that deepens Indigenous peoples’ distrust in the justice system. It tarnishes efforts toward reconciliation and will strike fear in young First Nations men in rural Canada. After the decision was read, dozens in the courtroom burst into tears, while others shouted “murderer!” as Stanley and the 12-person jury were quickly escorted out of the building. “This is how they treat us First Nations people,” Alvin Baptiste, Boushie’s uncle, said as he left the courthouse in Battleford, Sask. His reaction echoed across the country: justice of some sort was served, just not for Colten Boushie.