The 15 most ridonkulous moments of the election

The good, the bad and the bathrobe.

Federal election 2015: It was the best of times, it was the worst of times. Oh, who are we kidding — it was the longest of times: week upon week of back-and-forth jabs and impenetrable political rhetoric, punctuated by blips of utter inanity. Perhaps the length of the 78-day campaign is to blame for what seems like an above-average tally of LMFAO incidents, ranging from the supremely silly to the seriously offensive. Here, we look back on the season’s most memorable moments.

The Green party leader made her limited debate time count by dropping what quickly became known as the “sassy peace sign” at the start of the first French language debate in Montreal. (Her fingers said let’s keep this civilized, but her eyes said you boys are going down.) The covertly baller move became this popular Vine video.

14. Justin Trudeau has the hots for Gilles Duceppe

Trudeau’s slip of the tongue during the an exchange on Bill C-51 during the final French language debate saw him referring to Gilles Duceppe as “mon amour” (my love), instead of “mon ami” (my friend). Presumably he meant to say the latter?

The 18-year-old Bloc member and “passionate community organizer” was called out for sharing some of her less highbrow passions in a 2014 online forum. When asked what she would need to survive in the event of a nuclear disaster, Provost responded, “My cellphone, a penis and lots of chips.” (Well, technically she responded “mon cell, un pénis, ben des chips.”) The media cast this moment as “catastrophée,” but add a bottomless supply of French onion dip and her list sounds sort of perfect.

The Liberal Party leader’s assertion that we need to build the economy “from the heart outwards” during an August campaign rally in Winnipeg resulted in a whole lot of eye-rolling as well Care Bear comparisons on social media and the cover of the Toronto Sun. Sort of embarrassing, but hey, there are worse people to be likened to than Tenderheart Bear, especially when one of your opponents is being compared to Joseph Goebbels (see #7). 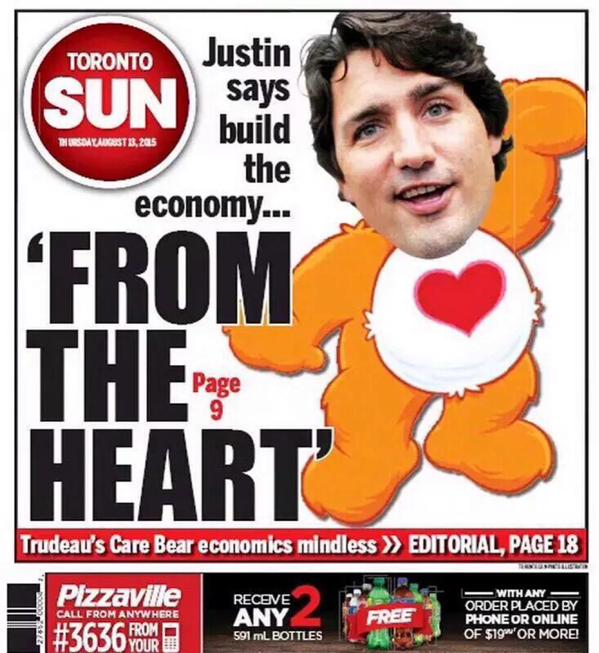 First rule of partisan politics in 2015: Don’t support other parties on your social media accounts. The Conservative candidate from Quebec was given the boot after the discovery that he posted pro-NDP photos on Facebook within the last year.

The Ontario Conservative candidate was forced into involuntary retirement following the revelation that he plead guilty to a previous drug charge. The possession in question: “one joint.”  And no, despite what appears to be a shared extra-curricular interest, he’s not one of those Fords.

A B.C. Liberal having a pro-pot stance is not entirely surprising, but Davies’ comments (made during an interview with the Huffington Post) that smoking pot while pregnant is A-OK and might even make your baby smarter were deemed a little too far-out for mainstream voters. She resigned the next day.

Though presumably intended as a compliment, Minister of National Defence Jason Kenney’s Twitter comment commending an 11-year-old Iraqi refugee for his “perfect, unaccented English” struck a similar xenophobic note as Harper’s reference to “old stock” Canadians during the Maclean’s debate. Did we mention Kenney is also the Minister of Multiculturalism?

Could @Jkenney explain what “unaccented" means & why it's preferred? -A "Accented" Canadian  #elxn42 pic.twitter.com/mH6O4brZ9c

Eid, a Conservative candidate from Quebec, was forced to apologize (though not resign) over his Facebook comments that likened NDP leader Thomas Mulcair to Adolph Hitler’s right-hand megalomaniac, Joseph Goebbels. Not cool. Unfortunately, it wasn’t the only Nazi-related misstep this election season, but we’ll get to that later.

Last month, a tipster exposed the Toronto Conservative as the previously unidentified handyman featured in a 2012 episode of CBC’s Marketplace. On the show, a hidden camera catches him peeing into a coffee cup then pouring it down the sink while out on a house call. Bance was swiftly removed from the Conservative ticket; the #peegate hashtag has been used more than 46,000 times since.

When the Liberal MP Chrystia Freeland crashed the men’s-only Cambridge Club in Toronto to protest Finance Minister Joe Oliver delivering a speech to an organization that doesn’t allow women, she was met by one seriously unimpressed (and still unidentified) gentleman in a white bathrobe. Oliver’s speech was cancelled, but #bathrobeguy will live forever as a terrycloth-clad symbol of class war and income disparity.

#bathrobeguy: Is that a woman talking to a man in a men's club? Where are my clothes? http://t.co/pJiY9cB5Ut pic.twitter.com/ZWcuiyNa7S

4. Cheryl Thomas is dreaming of a whites (only) Christmas

The B.C. Liberal candidate resigned after revelations of a whole whack of racially insensitive Facebook posts, including this doozy: “Santa has to be white!!! You can’t have a brown guy with a beard sneaking into your house in the middle of the night! You’d be calling the bomb squad!”

The Toronto Conservative candidate was shown the door following the discovery of an editorial he wrote in the Punjabi Post entitled “Is it wrong for a homosexual to become a normal person?” In the piece, Grewal advocated for conversion therapy, saying that being gay “can be corrected.” Unforgivable acts of bigotry on the other hand…

And the Old Charmer Award for Election 2015 goes to: Vocal Harper-ite and ardent Duffy-defender Earl Cowan (stage name: Angry Old Guy). Cowan became a viral sensation after speaking to (or rather shouting at) two female press members outside of a Conservative party event in Toronto. With the classic curmudgeonry of a Scooby-Doo villain, Cowan decreed that it is the media (and not the people on trial) who are the “lying pieces of shit.” #AngryCon is born.

1. Auschwitz? Never heard of it

In 2008, a then twenty-something Alex Johnstone made what were meant to be funny comments on a friend’s Facebook photo comparing the posts of an electric fence to phalluses. Only problem was that the fence was at the Auschwitz, the Nazi concentration camp that everyone who’s completed a grade-school history project has heard of … or so one might assume. In fairness to Johnstone, an NDP candidate, the original gaffe was understandable, since the photo she commented on isn’t immediately identifiable. Her explanation, however — that she was not aware of Auschwitz until now — makes her continued candidacy kind of mind-blowing.

Related:
The federal leaders tackle “women’s issues”
I’m a Muslim voter and I’m sick of hearing about the niqab
Is the Conservative mat leave plan all it’s cracked up to be?