5 Takeaways From The Federal Election Debate

The English-language debate put the spotlight on Annamie Paul and featured jabs at Yves-François Blanchet. 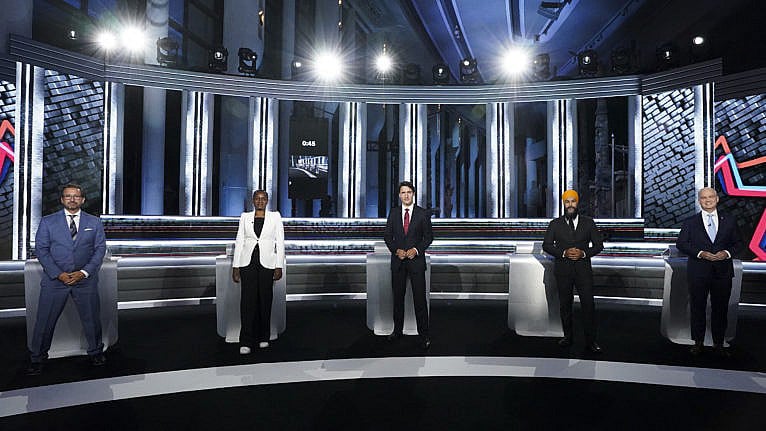 Every election debate—let alone one with five leaders and 613 moderators/questioners—will become a jumble of issues, attempted soundbites and vain struggles to make any singular moment to stand out. There’s almost never a knockout punch, which is why pundits still keep referring back to an exchange from 1984’s election, 37 dadgummit years ago.

But a few themes and impressions did seem to emerge Thursday over the clatter and incessant interruptions of the only English-language debate to be held during the 2021 election campaign—an event organized by the federal debate commission and a consortium of broadcasters.

The Liberal leader may profess to have lifted 109 drinking-water advisories on Indigenous reserves since 2015. But it’s far more stinging that in a vastly wealthy, modern country there are still dozens of communities that must boil and then cool water before drinking it.

Time and again, the Liberal leader was attacked on his government’s record and tried to swing back aggressively. If it wasn’t Jagmeet Singh hitting him on taking Indigenous kids to court, it was Erin O’Toole criticizing his ability to meet climate change targets—to which Trudeau replied that 2030 remains nine years away, in one of multiple moments in which he flashed visible irritation, or got unusually combative.

At the outset of this campaign, it seemed Trudeau might coast to victory on the strength of his record. But some of the Liberals’ shortcomings look glaring if cannily framed, and his opponents did that on Thursday.

If the success on water purification in 109 communities is overshadowed by 51 advisories remaining, it’s because Trudeau promised to have erased them all by now. The expectations he created with lofty commitments in 2015 are certainly haunting him in 2021, providing opportunity for every challenger to hammer him.

An advantage of being Prime Minister is that it’s easiest for you to look prime ministerial. The disadvantage, on clear display in this debate, is that you have to defend everything you’ve done—or failed to do—as Prime Minister.

There was a foreign affairs section after all, and isn’t O’Toole better off for it?

Many observers, especially conservative-leaning ones, expressed frustration that there wasn’t a section of the campaign’s lone English debate devoted to foreign affairs, especially on the heels of the Taliban’s takeover of Afghanistan and the ongoing imprisonment of Michael Spavor and Michael Kovrig in China.

Thing is, a section named “Government and Accountability” can be plenty flexible. So two early questions centred on the crisis in Afghanistan, and how to deal with China.

On a night when O’Toole was largely steady and calm, this mini-section was his strongest. He stressed that while Canada’s population is tiny compared to China’s, this country could be a “giant” with its commitments to human rights and rule of law, and that it must work more effectively with its allies. On failing to get thousands of Afghanis out of their country, he argued that Canada should never leave behind those who helped it, and circled back to every non-Liberal’s favourite theme, the questionable timing of the election: “You put your own political interests ahead of the well-being of thousands of others.” And when he noted that Trudeau didn’t show up to vote on the Conservative motion to declare China’s atrocities against Uyghurs a genocide, the jab landed.

Liberals dodged that motion because of the diplomatic ramifications such a clear-eyed move would have with brittle, hostage-taking Beijing. And on Afghanistan, Trudeau tried to defend himself by point to the many successful escape flights that Canada facilitated to bring thousands of people out of peril. International affairs involve tricky, nuanced stagecraft. But that’s harder to get across in a debate than O’Toole’s appeal to Canadian ideals, served up with knit brow and earnest phrasing.

Much of the pre-debate chatter reasoned that a tightly structured format—a rotating cast of questioners, the switches between open debate and two- or three-person jousting sessions, and the citizen questions—would limit any particular leader’s ability to shine. In actuality, the moderators’ dogged fidelity to their structure and timeline squeezed most of the light out of this affair.

Lead moderator Shachi Kurl, a pollster and former journalist, rapidly cut off many attempts to pivot from one topic to the next, and hawkishly watched the clock to ensure all of the myriad elements of the program had their slotted times. It led to a moment that some observers believe will raise anger in Quebec, and potentially draw votes to the Bloc: Kurl wound up arguing with Yves-François Blanchet, the Bloc Québecois leader, who claimed he’d been shorted when it came to timing. This came after she’d begun the debate with a tense exchange with Blanchet over Quebec’s controversial Bill 21 banning religious symbols from public workplaces.

At another point, Kurl offered Trudeau an absurdly paltry five seconds to respond to various critiques of his record. Some past debates have gone wildly off topic or off-kilter and would have benefited from a moderator with a tighter leash. Kurl’s leash often seemed like a choke chain, stifling many exchanges from blossoming into actual, you know, debates.

Some of the one-on-one questions from Kurl and other journalists set the leaders on their heels in ways debate viewers seldom see—as when CBC’s Rosemary Barton asked Singh whether he wanted to protect homeowner’s equity or help young people be able to afford a house (the NDP leader tried having it both ways). But the one-by-one questioning of five leaders prevented any of those issues from getting properly fleshed out, and the discussion suffered because fellow leaders weren’t able to chime in themselves.

This was supposed to be O’Toole’s introduction to Canadians, but Annamie Paul seized the spotlight

The Green leader has been hemmed in and stifled throughout the campaign thus far, by a party brass that’s tried to extinguish her leadership; by flailing organization that has left her dozens of candidates short of a full national slate; and by her decision to spend nearly the entire campaign obsessed with her long-shot bid to win her own seat in Toronto Centre. She needed a lift.

She gave herself one Thursday, by portraying herself as the reasoned conciliator among a group of bickering men, and sharing much of her biography. We were introduced not only to a lawyer, but her whole supporting cast—a husband who’s worked in international human rights, a brother who used to be an Alberta roughneck, a grandmother who worked well past retirement age, parents who struggled to put food on the table, relatives who taught her Caribbean expressions. Was it overkill in the minds of some politicos? Yes. But it made her personable in a way that will appeal to many voters, impressing upon them, at least, that there’s more to her than an embattled leadership. (O’Toole, the only other newcomer to the English debate stage, did far less to bring forth his personal history or much of his character, aside from positing that he’s the guy who will drive the bus, not the Conservative caucus.)

Paul also suavely took down Blanchet when he objected to a comment about his refusal to acknowledge systemic racism in Quebec: “It’s not an insult, it’s an invitation to educate yourself,” Paul said.

Condolences, though, if you were looking for policy chops from the leader of a party that’s long pitched itself as the smart alternative. She gave more family anecdotes than policy solutions. What was this Green leader’s big idea for solving the climate crisis? Bringing all the parties in Parliament together to discuss it. Several of her proposed solutions were along those lines, which is a far cry from those of her details-obsessed predecessor, Elizabeth May. And perhaps that’s why so many Greens are out to thwart her.

Two years ago, Trudeau’s former justice minister (and her ouster from caucus) were at the centre of the SNC-Lavalin scandal, the major ethical issue of the 2019 election. That saga is barely a memory in 2021, and Wilson-Raybould herself has decided not to run again after one brief term as an Independent. And yet, she got mentioned at least three times during this debate, by both Paul and O’Toole. In 2019, she only got name-dropped once, by Conservative leader Andrew Scheer.

Why the repeated reference that will, for now, seem a distant memory to many political junkies? It’s likely a teaser for material that could dominate political discussions in the election’s final week. Wilson-Raybould’s book comes out next Tuesday. The title: “Indian” in the Cabinet: Speaking Truth to Power.