Here's why Kim Campbell is fixated on the U.S. election

The first (and only) woman to serve as Canadian prime minister tells Chatelaine why she's so invested and what scares her the most about this campaign. 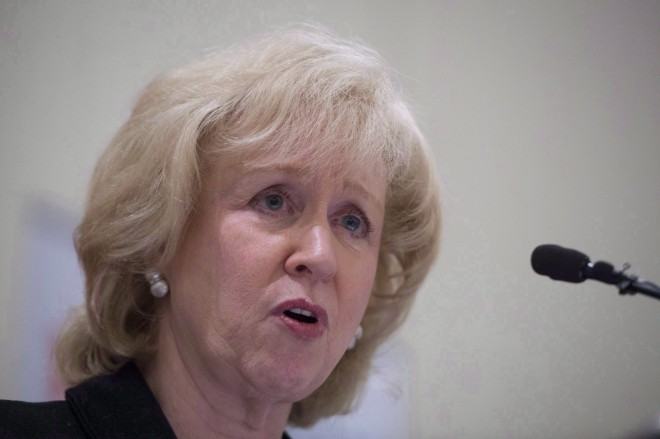 Canada’s first (and only) female prime minister Kim Campbell is watching the American election with a blend of horror and hope: Horror at the moral and political danger she sees in Donald Trump, and hope that Hillary Clinton can make history as the first woman president.

Campbell was elected to Parliament in 1988, and after a being appointed to a number of cabinet posts, including becoming the first women to serve as justice minister, she became leader of the governing Conservatives when Brian Mulroney stepped down in 1993. From the media outcry over a portrait taken of her with bare shoulders to her crushing loss to Jean Chretien’s Liberals in that year’s election, she knows firsthand how tough it can be for women fighting for the top ranks of political power.

She spoke with Chatelaine by phone from Edmonton, where she is head of the University of Alberta’s Peter Lougheed Leadership College, about what’s changed for women in power since she left politics, why she’s been so vocal on social media during this U.S. presidential campaign and what the lasting impact of this turbulent moment will be.

The U.S. election is pretty much the theme of your Twitter feed these days — why are you so invested in it?

None of us can afford to just sit back and eat chocolates waiting for them to make their decision. There’s so much at stake here. People are talking about how unpopular Hillary Clinton is and that she can [barely] defeat Donald Trump. I think she’s also pushing against a huge wave of misogyny.

When you have a non-prototypical person [like Clinton pursuing a leadership position], there’s often a visceral reaction against that person from people who consciously and intellectually are very supportive of equality. When she’s not running for office, her approval ratings are incredibly high — people really like her. But it’s when she’s seeking power, that changes. Which is why I think if she’s elected and carries out the job, it will be easier for people to like her.

You speak from a place of authority on this.

I’m a battle-scarred veteran, my dear.

It’s been 23 years since you were prime minister —what do you think has and hasn’t changed about the way Clinton is being by treated Trump supporters and by the media as she tries to become the first woman president?

What I found in that [1993] election campaign was the perplexity of never getting the benefit of the doubt, people putting words in my mouth that I never said and people being prepared to run with it. I see this happening [now with Clinton].

What scares you the most about this election? Are the sexual assault allegations especially troubling to you?

I think the sexual assault allegations are a symptom [of the misogynistic culture Trump promotes]. I hope young women who’ve poo-pooed the notion of calling themselves feminist are sitting up and taking notice of how deep misogyny runs in certain parts of American and probably Canadian society.

When you are a political leader, it’s a very big moral obligation because you can give people permission to say and express things that they otherwise know are not really appropriate. They may say them at home, but you are, in a sense, validating them and elevating them.

If Hillary wins this thing, you’ll be the first women to run your respective countries. What’s one thing you would share with her about being first?

What do you think will be the lasting impact of this election in both the U.S. and in Canada?

I think for Canada, I mean if Hillary Clinton is elected, she’s a friend of Canada, there will be things we might disagree with, but there’ll be a sane person in the White House.

And the impact of Trump’s rhetoric even if he doesn’t win?

I don’t know that it’s going to have an impact in Canada, but Americans are going to have to wrestle with it. He has taken the lid off something and it’s going to be very hard to put the lid back on again. One of the things Canada can do is to continue to be Canada, which is not perfect, but is a society where so far we haven’t fallen to the depths of tolerating the kinds of things Trump has unleashed. Americans are actually looking to us now — they say “Canadians are so nice.” You can be nice when you live in a functioning democracy and you have reasonable prosperity and a commitment to make society better.

More:
The sperm donor who lied — and the couple that’s fighting back
Tru-do’s and Tru-don’ts: A review of Justin Trudeau’s PR wins and losses
Great boots for curvy calves do exist. Here’s where I find them